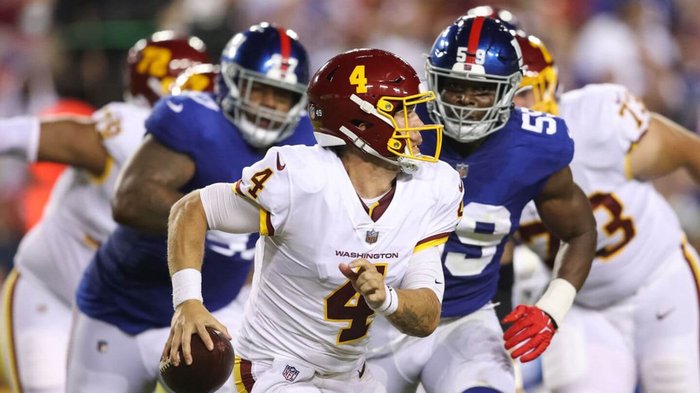 It all rested on the foot of the cool-headed Hopkins as time expired in Landover Thursday Night.

In a 30-29 nail biter, Washington and New York were never separated by more than seven points, but a first half offensive shootout evolved into a clinic in defensive dominance and field goal efficiency.

The Washington defense forced no turnovers, which shouldn't be a trying task when facing the league's most turnover prone quarterback in Daniel Jones, but their ability to stall the Giants after entering field goal territory with consistency kept their offense in the game.

Chants of the helpfully syllabled "Hei-nick-E!" started well before kickoff and arose in key moments throughout his 336 yard, two touchdown, single interception regular season debut with Washington. For someone with so little NFL experience, he showed little fear in unfurling the deep ball. He found J.D. McKissic down the home sideline for a fifty-six yard completion late in the fourth quarter. The next play he threaded the ball to Ricky Seals-Jones on a fade in the back corner of the endzone. Heinicke, McKissic, and Seals-Jones all went undrafted out of college.

But the high-flying Heinicke was bound to be grounded eventually.

A late-game interception set the New York Giants up in the red-zone. A single first down would have sealed Washington's fate.

Clock management and a fired up defense forced a swift three and out. Graham Gano kicked his fifth field goal of the night to put the Giants up by two points at the two-minute warning. Gano's short-lived heroics will live on in the hearts of fantasy owners across the country (22 points), but not the fans of the fallen G-men, who have now started five consecutive seasons at 0-2.

What followed was every fan and coach's dream of a two-minute drill.

Unlike the Washington two-play, seventy-five yard touchdown drive from just minutes before, the final drive consisted of no plays longer than nine yards. Heinicke worked the middle of the field with the composure of a seasoned veteran. Eleven plays and forty-five yards later, Dustin Hopkins took the field for a forty-eight yard field goal attempt with five seconds remaining.

The kick sailed wide to the right.

After an eternity of five to ten seconds, the crowd began a dejected but cautiously hopeful murmur -- a flag has been spotted to the right of the line of scrimmage.

A defensive offsides penalty sends Dustin Hopkins out for a shot at redemption with zeroes on the game clock, now five yards closer to the uprights. The kick sails up and to the right with the same trajectory as the miss, before curving left and just within the goal post.

Whether it was the expert-level spin of a veteran kicker or a gust of wind from the storm whirling near Washington at the time, we may never know, but the Washington Football Team is victorious at home against the New York Giants for the first time since 2017.

*via my blog at backsportspage.com*