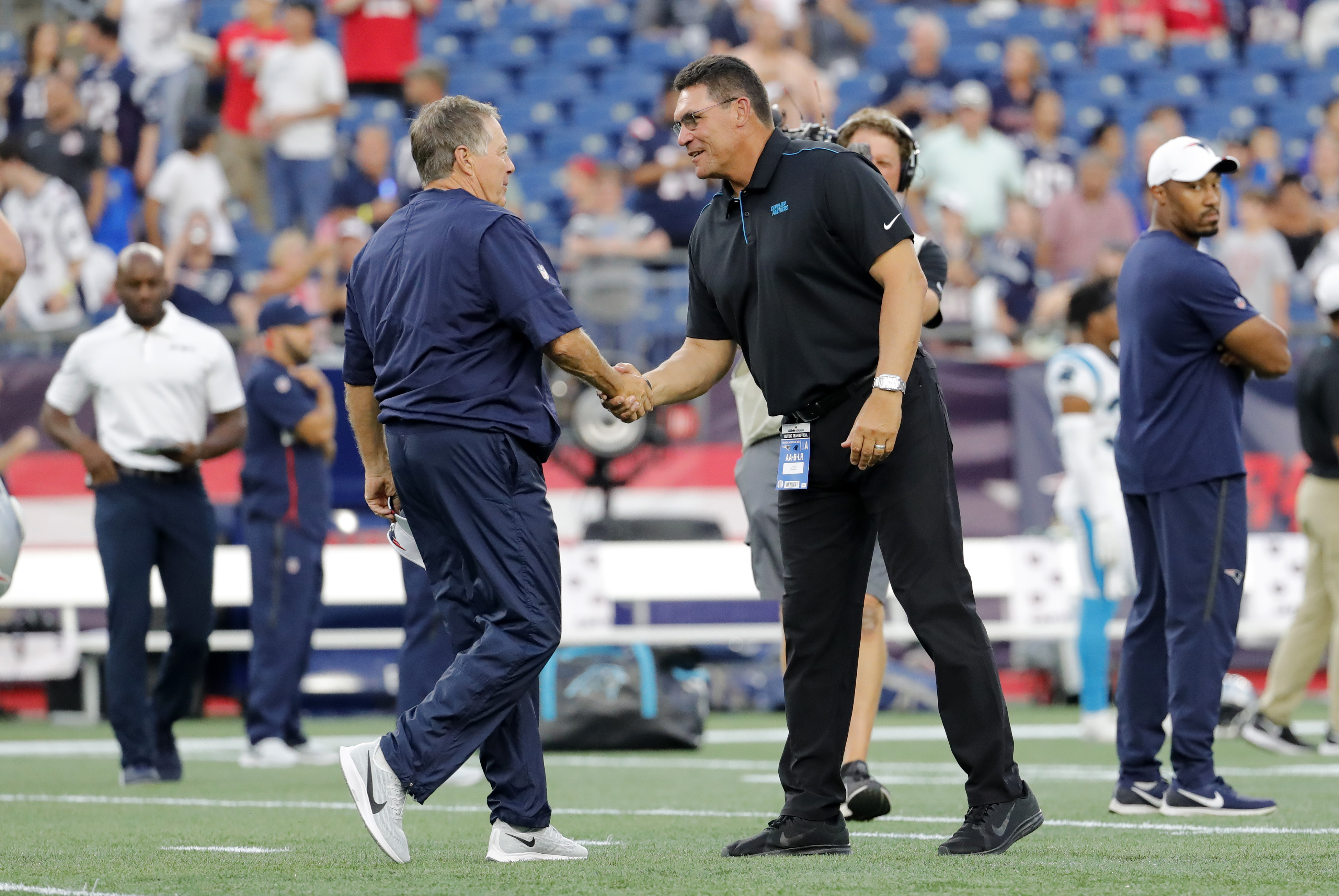 Ron Rivera and Bill Belichick have something in common: They’ve both won multiple NFL coach of the year awards. Belichick has won three to Rivera’s two (with Bruce Arians the only other active coach to have won more than one). Both coaches have defensive backgrounds and were fired from their first head coaching gig without having achieved the ultimate success. Belichick has also, of course, since won 6 Super Bowls to Ron’s one Super Bowl appearance.

Yes, Belichick recently lost in the Wildcard round of the playoffs against a stout Titans team, but there’s no denying that his team’s unmatched success over the past two decades provides some important lessons for the rest of the league.

Shortly after his firing from the Panthers in December, and a month before his hiring as Redskins head coach, Ron Rivera was asked by Peter King about some of his lessons learned over his nearly 10 year career in Carolina. Several of those lessons have come from watching what Belichick has done. Here we’ll dissect some of those thoughts, and speculate on what they might mean for this Redskins team moving ahead.

Rivera’s first "lesson learned" didn’t appear to be a takeaway from Belichick:

The first thing is understanding what it takes to get the team on the rise. Then I think I understand a little bit better just how important it is to make sure the picks that you have, the core players you have, that you are able to get those guys taken care of, keeping those guys.

He contrasted this initial impulse (or at least tempered it), with a lesson from the Pats’ head coach:

"At the same time, knowing - I’ve tried to pay attention to what Bill Belichick has done, and how to slowly transition guys out and transition guys into being the new core guys. That’s what he’s done tremendously well."

In a league where drafting well and relying heavily on players on rookie deals is one of the most reliable keys to success - or at least one of the best ways to avoid stagnation and collapse - Rivera’s recognition that vets are important, but that there should be a succession plan in place to "transition [young] guys into being the new core guys" is encouraging.

In practical terms for the Redskins, it could translate into an allegiance to current "core guys" like Trent Williams and Ryan Kerrigan with a deliberate plan to draft and groom "new core guys" to replace them before they are completely spent. In a similar vein, Belichick has been successful in moving core players along before they drop off a cliff, returning value to the team while the players still have it. It will be interesting to see if Rivera has internalized that lesson as well.

"Something else I just got from watching him. I don’t know if a lot of people are talking about this, but the style of defensive player you need today, in my opinion, has changed," Rivera said.

"I got that based on what I saw him do last year in the playoffs. He put guys on the field that could chase (Kansas City Chiefs quarterback) Patrick Mahomes, then to stop the (Los Angeles) Rams from running.

Given the shared defensive focus of both Belichick and Rivera, it’s no surprise that Rivera would have a keen interest in the Patriots’ evolving defensive approach. It shows a preference for a faster, more nimble defense over a lumbering, massive one. It’s a lesson that Rivera took to heart sufficiently seriously to use the Panthers first pick (#16) in the 2019 draft on Brian Burns.

One curious sidenote regarding Burns is that he had a lightning fast start for the Panthers in 2019, collecting 4.5 sacks in his first six games - starting while veteran Bruce Irvin was injured. Once Irvin was back healthy, Burns’ playing time was significantly scaled back, much to the consternation of Panthers’ fans. Burns’ usage jumped a bit after Rivera’s firing, though Irvin still outsnapped him in all 4 games.

This apparent paradox, drafting Burns only to sit him for the more established vet, could potentially represent the triumph of Rivera’s heart over his head, and an unwarranted loyalty to vets over rookies, which was a common refrain among Panthers’ fans during his time there.

In any case, a player like Isaiah Simmons (DE/LB/FS) out of Clemson, described frequently as a defensive "Swiss army knife," would seem to be the prototypical sort of weapon Rivera might enthusiastically incorporate into his defense in Washington.

I suspect we’ll get a pretty good idea of how deeply Rivera has incorporated these lessons into his team building approach in the coming months, as he negotiates new deals (or doesn’t) with vets Trent Williams, Ryan Kerrigan, and Brandon Scherff, and set his priorities for the draft.

Would you prefer Rivera err on the side of loyalty to vets or commitment to a young roster?