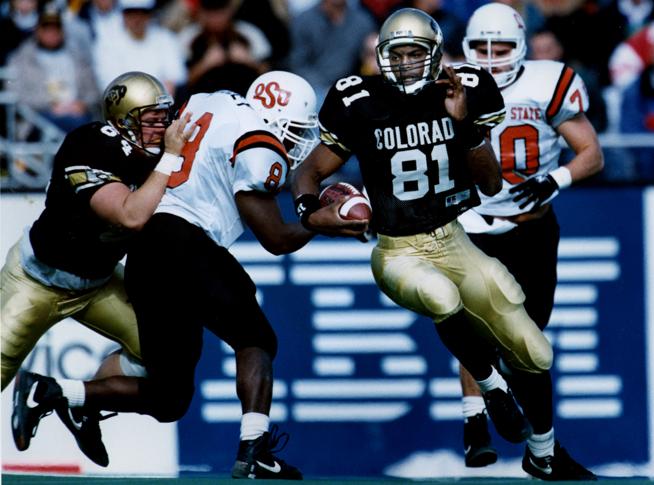 At Hogs Haven, there seem to be two camps of commenters on the topic of drafting a wide receiver: 1) Those who think that the receiving corps is so pathetic, and the need so great, that we simply must take at least one, and perhaps a couple WRs with our early draft picks; and, 2) Those who admit that, while the receiving corps needs dramatic improvement, drafting a WR is more complicated than just looking at stat sheets, and that high quality WRs can be found in the later rounds of the draft, and even as UDFAs. So which group is right?

I have my own perspective, but I'd like to think that it's informed by data, the opinions of qualified professionals, and the best available information out there. This piece represents an exploration of the state of the field.

How Do WRs Drafted In the First Round Perform?

Several years ago, Bleacher Report published a piece analyzing the safest and riskiest positions in the first round of the NFL draft. They looked at a 25-year sample of players across the full range of positions to see which positions most frequently resulted in All Pros, Pro Bowl players, and "busts," players who started less than 50 games in their NFL careers.

Among all positions, WR had the third worst All Pro rate (15.2%) for first round picks, behind only TE (14.3%), and QB (5.3%). Normalizing this for the fact that there are 3 All Pro WRs and only 2 All Pro TEs and QBs selected per year, WR is arguably the second least likely position (only behind QB) to result in an eventual All Pro.

The Pro Bowl outlook is, relatively, even worse. Wide receivers taken in the first round were the least likely position (30.3%) to make the Pro Bowl. (Close behind, and a little nerve wracking for the Redskins, DL was the second worst position for Pro Bowlers (30.6%)).

Interestingly, until the past couple of years, the conventional wisdom had been to avoid RBs in the first round, likely in part because their bust rate was so high and good RBs could frequently be found in the later rounds. Desperation is usually the driver for first round QBs, so it's little surprise that even with a high bust rate, teams will continue to go to that well, hoping to buck the trend.

As a final note, these numbers and percentages tend to get worse as the analysis focuses more and more narrowly at those chosen at the top of the first round.

To pad this stat driven analysis with a few anecdotes, the Redskins' drafting of WRs in the first (and second) rounds over the course of the past 25 years has been absolutely abominable: 1995, Michael Westbrook (round 1); 2001, Rod Gardner (round 1); 2003, Taylor Jacobs (round 2); 2008, Devin Thomas and Malcolm Kelly (round 2); 2016, Josh Doctson (round 1). Based on this list alone, the Redskins should never take another WR in the draft before round 3. To describe this group as a dumpster fire would be an insult to trash conflagrations everywhere.

I've made my admiration of Bill Belichick's tactics pretty clear here on Hogs Haven, making it the subject of repeated fan posts. So what does Belichick think of drafting wide receivers early in the draft? Did you know that since Belichick took over in 2000, the Pats are the only team not to have taken a WR in the first round? Their highest draft of a WR was at pick 36 in the 2006, Chad Jackson. Chad started 18 games over 3 years, racking up 171 yards, and finished his career with an AV of 2. I suspect Belichick learned his lesson.

Some have called Belichick's failure to draft quality WRs early a "blind spot," while others might simply say he's recognized - as he so often has in other instances - a weakness in the system before his contemporaries. It turns out, he's actually quite good at drafting receivers late in the draft.

Recently, Belichick opened up on the topic of drafting WRs. The rest of us would do well to listen to what he said. Belichick explained that the passing game is so dramatically different from college to the NFL that it's very difficult to evaluate WR talent coming out of college and going into the draft.

Alternatively, once guys have played a few years in the NFL, it's much easier to evaluate their talent level in a similar game and set of schemes. Perhaps as a result, 75% of the receivers (9 of 12) who have had 1,000 yard receiving seasons under Belichick's tenure have been veterans, added after a few years in the league, as opposed to players drafted by the Pats.

Of this group, Cooper has really been the only star performer. There's certainly no one else in that bunch who approximates AJ Green, Julio Jones, OBJ, Mike Evans, or Brandin Cooks, all first round WRs taken in the 2011 and 2014 drafts. In some respects, there may be reason to believe that these two, fairly unique drafts, have skewed the perceived value of picking a WR early on.

Interestingly, the current situation has been described by some as a "wide receiver crisis" driven by three particular issues in the current college game: 1) Wide receivers are being isolated in college offense schemes by their coordinators, and not gaining an understanding for how they fit into the larger offense. 2) College players are being taught route running less effectively. 3) College players are more frequently catching with their fingertips than their hands. These weaknesses, pointed out by accomplished former receivers like Ricky Proehl, who is now a WR coach, are potentially elements that scouts and talent evaluators could key in on to find WRs with solid fundamentals who could successfully transition to the NFL game, even without necessarily having posted huge numbers in college.

Perhaps more than any other position, WRs are hyped based on their combine performances and flashy statistics -See Metcalf, DK. We should avoid the allure of falling in love with WRs who dominated the college game and produced smoothly-edited highlight reels, instead mining the college ranks for players with adequate athleticism, but - more importantly - great fundamentals, such as understanding how offenses work, route running, and ball control. These guys can be, and routinely are, found later in the draft, after the "shiny objects" have been taken off the board rounds earlier. Let's get two or three of those guys this year.

Where do you think the Redskins should draft their first receiver in 2019?