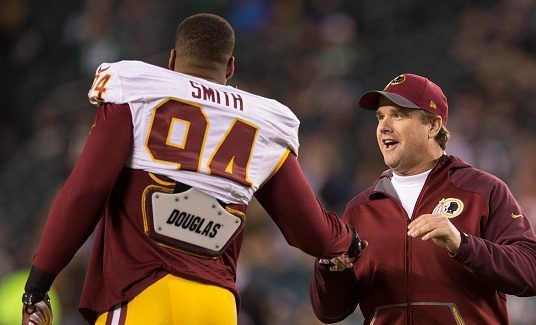 As a result of having several desirable free agents leave after the 2018 season, the Redskins find themselves in a very unusual situation - by their standards - in 2019: They are anticipated to have 3 compensatory picks in the 2019 draft. Those picks are likely to be a third rounder (for Kirk Cousins), a fifth rounder (for Trent Murphy), and a sixth rounder (for Ryan Grant). It was originally anticipated that the Redskins might also get a seventh rounder for Niles Paul, but that seems unlikely to pan out at this point. Comp pick placement is derived through a complicated formula, but it is tied closely to the salary the leaving player commands once they leave for free agency.

This was managed as a result of two key components: 1) Having groomed a sufficient number of players along through their rookie contract that other teams were interested in them once those contracts were up. In this case, most of the players were from the successful 2014 draft class. AND 2) Minimizing the number of unrestricted free agents the team signs from other teams. In 2018, Paul Richardson was the only UFA the Redskins signed that hurt them in the compensatory pick sweepstakes. It appears his signing likely cost the Redskins a fifth round pick.

Below is the 2019 compensatory draft pick cancellation chart from Overthecap.com for the Redskins.

Going into the 2019 season, the Redskins have 22 unrestricted free agents. Of those, however, only six, or so, are likely to reach a compensation level that they would merit compensatory picks.

For the sake of this exercise, let us assume that Preston Smith, Jamison Crowder, HaHa Clinton-Dix, and Adrian Peterson are allowed to walk, and that Nseke and McPhee are re-signed. UFAs re-signed by their current team don't count in future compensatory pick calculations.

A hypothetical comp pick chart under that scenario is below. "Market Value" estimates are from Spotrac, except for Peterson's, which is estimated based on similar contracts for RBs in 2018.

Assuming a 10% escalation in the salary thresholds for each of the draft round cutoffs in 2020, these 4 players - based on the market value estimates of their next salaries - could net us a third rounder, two fourth rounders, and a seventh rounder. This is a "best case" free agency scenario that assumes we don't sign any particularly pricey free agents ourselves in 2019, a strategy I have vociferously advanced elsewhere.

In context, this has some interesting implications: Though we spent a second on Preston Smith when he was initially drafted in 2015, getting a third for him in 2020 would essentially mean we got a very low cost rental for him through his rookie contract AND that we offset the second/third round pick we are likely going to need to use on an EDGE in the 2019 draft to replace him. A fourth for Clinton-Dix essentially neutralizes the 2019 fourth we spent to get him from the Packers. A fourth for Crowder basically renders him a low cost rental, originally drafted in the fourth round in 2015. And anything for Peterson just represents icing on the AD cake at this point, having rented a 1,000 yard rusher for a paltry $1M in 2018.

These compensatory pick estimates are based on a number of assumptions, although all ground-truthed to reliable sources. It is critically important that the Redskins' front office weigh all of their potential free agency moves, including potentially re-signing their own players, through this lens in order to end up with the most favorable situation going into the 2020 draft. At this point, accumulating draft capital (and cap space) for 2020 should be an overriding team priority.

Please provide your thoughts in the comments. I look forward to the discussion.

Comp picks are no guarantee of success, but teams like the Chiefs, Broncos, Patriots, and Cowboys routinely find themselves netting between 2 to 4 comp picks per year. It doesn't take long for that to add up to a massive advantage against the competition. During this 5 year period, the Redskins are one of six teams to have no compensatory picks. The other five were: the Jaguars, Titans, Eagles, Bears, and Saints.

What do you think about this scenario for trying to optimize compensatory picks in 2020?