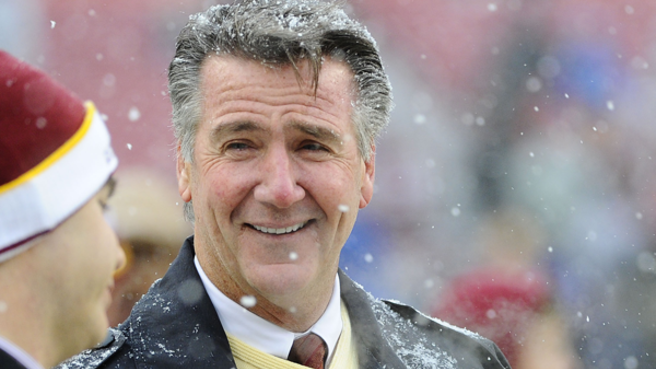 Many of us had hoped against hope that, at the conclusion of this dreadful season, our incompetent Team President/General Manager/Worm Tongue, Bruce Allen (career Redskins' record: 59-84-1), would be shown the door. Unfortunately, his role with the team is instead expanding.

"He treated truth as if he was afraid of going over the cap." - Gary Shelton

We Should Have Seen This Coming

At Allen's hiring announcement in 2009, Dan Snyder proclaimed, "Bruce Allen is the personification of an NFL winner!" Ecstatic early takes at Hogs Haven notwithstanding, Bruce's pre-Redskin reality suggests something else.

Bruce's first adult experience in the NFL was as an agent, where he was fired by two of his most famous clients, Ickey Woods and Craig "Ironhead" Heyward, both of whom accused Allen of defrauding them and embroiling them in bad real estate deals in the late 1980s. Allen attributed the charges to envious agents, "There's a lot of jealousy on the part of agents who are incompetent fueling this." We now know that Bruce has more than a passing familiarity with both jealousy and incompetence, and may have unintentionally been projecting some of his own traits on the competition.

Bruce's first experience working for an NFL team occurred when Al Davis hired him as a "senior assistant" in 1995. Over 8 seasons with the Raiders, during several of which Allen headed up the personnel department, the team went 64-64.

Very recently, Michael Lombardi, an executive who worked with Bruce in Oakland let loose about Allen's past role with the Raiders, "Bruce has been the general manager under the disguise as a football guy. And let's face it, Bruce never did any football with the Raiders when I worked there. He wasn't even in the draft meetings when we were there. He never was involved in player personnel." Other accounts give Bruce's role as primarily focused on salary cap management.

After winning the Super Bowl in 2002, Jon Gruden hired his buddy, Bruce Allen, in 2004 away from the Raiders to come work for the Tampa Bay Buccaneers. Allen and Gruden promptly moved on from likely Hall of Famer John Lynch and HOFer Warren Sapp, and proceeded to go 38-42 with no playoff victories over the next five years.

When Bruce was fired from Tampa in 2009, along with Jon Gruden, there should have been doubts. A close examination of Bruce's drafts with the Bucs doesn't leave much to be impressed with. Gary Shelton, a columnist for the St. Petersburg Times, even gave an entirely familiar account of Bruce - who he referred to as "The Prince of Darkness" - as Allen was kicked out the door in Tampa: "That was Allen, too, who treated the truth as if he was afraid of going over the cap. He was smug, and he was distant, and he disliked reporters as much as many of them disliked him."

Last spring, in a USA Today poll of 25 NFL agents, Bruce was rated as "least trusted decisionmaker in the NFL." A veteran agent was quoted as offering, "You never know if he's shooting straight with you." The Redskins franchise was rated as the third least prepared during contract negotiations, behind only the Bengals and the - pre-John Dorsey - Browns.

Lombardi, who worked together with Bruce in Oakland from 1998-2003 shed some light on the origin of that reputation by using the example of the Kirk Cousins' negotiations, "Bruce thinks sometimes he's smarter than the agents. And the agents called his bluff every time. And [the Redskins] never really bought into Kirk Cousins that he was ever going to do it and they thought they were being cute. And now, all of a sudden, their cuteness is going to cost them a lot of money." And, indeed it did, around $44M over two years for Kirk, as well as the third round pick, Kyle Fuller, and $9M per game to secure Alex Smith, in order to paper over Bruce's negotiating debacle.

From the Peter Principle to the Redskins' (Bruce) Principle

In the study of organizational development, there is a notion called the Peter Principle: That within organizations, individuals will tend to rise through promotion until they reach their level of incompetence (otherwise, if they were competent, they would continue to get promoted).

In the face of the Redskins' recent decision to expand Bruce's role - despite a lengthy track record of not succeeding at his current duties - Lombardi coined the "Redskin Principle of Success," henceforth known as the "Bruce Principle," to describe a situation in which an employee is so awful at one job, you decide to give him additional responsibilities. We have decided to promote the man beyond his incompetence (assuming that hadn't already been done).

What is now clear is that we're stuck with Bruce Allen, at least through 2019, and the question turns to: How much damage can Bruce do over the next 12 months? As it turns out, quite a bit. Desperate men - and both Bruce and Jay Gruden are desperate men at this point - often do stupid things.

Despite cap constraints stemming from the Smith injury, they may try to overpay a free agent QB, like Teddy Bridgewater or Ryan Fitzpatrick to scrape out a mediocre season. The more likely path, however, is that they try a hail Mary move in the 2019 draft, cobbling together the franchise's future picks to pull off another RG3-like trade to grab Dwayne Haskins, Drew Lock, or Kyler Murray. Anything to put fans in the seats in 2019, no matter how damaging it is to the team's future.

Please, Danny, don't let Bruce embroil us in one bad, final deal. If you're going to keep him around this year, make him play with the hand he's been dealt, and don't let him mortgage the team's future either in the draft or salary cap realm. It's the least you can do for us, the long suffering fans of this cursed franchise.

Do you think Bruce should be allowed to trade up in the 2019 draft or sign a pricey free agent QB?