Hogs Haven friend and Philly.com writer, Jimmy Kempski, wrote three articles why all the NFC East teams will be dumpster fires. Since he's an Eagles beat writer and can't roast his own team, we decided to help out.

Share All sharing options for: 10 reasons the Eagles are going to be a dumpster fire this season

Jimmy likes jokes. Jimmy makes them often. Jimmy thinks his team is good even though they come up short every year. Jimmy wrote three entertaining articles:

I have an especially fond appreciation for Kempski's Cowboys article. Is anyone besides me wanting to run their 401K to the Vegas window to bet the Cowgirls under? Even Troy Aikman thinks Romo is screwed. But I'm not here to discuss Dallas' dumpster tire fire. We need to talk about the Eagles. Ah yes. Philly. I asked Jimmy Kempski his prediction for the Eagles this season and without hesitation he texted back "10-6." Classic homer.

1.) Element of Surprise. Hmm...this sound familiar? A new coach with a new QB gets to play the last place teams of every division with little expectations, a new playbook, and wins the division. The Redskins had it in 2012...the Eagles in 2013. Even though RGIII totaled his knee, everyone still predicted the Redskins winning at least nine games last year. It's quite amusing seeing Philly and their racist fan base fall down the same trap. Eagles fans: "We won the division last season!! We're guaranteed to be AT LEAST as good as last year." Let's totally ignore the fact the entire NFL has 18 games of film on Chip Kelly....we're still amazing!!! (insert terrible fight song chant here)

That there is some bragging rights there. What happened when you played a real QB? Broncos won 52-20. And then of course the Vikings bent you over a table with Matt Cassel and no Adrian Peterson. That home playoff loss to the Saints had to rekindle all those oh so glorious three consecutive NFC Championship home losses.

While you start week one in 2014 against a fluffy Jacksonville - the Panthers, Packers, Niners, Seahawks is a long cry from facing Scott Tolzien. Are you guys still jocking Casey Matthews to be your hero LB?

3.) NICK FOLES IS A GOD. As delusional as Redskins fans are with their free agent signings, Eagles fans are double that with their QBs. Every male Eagles fan had a chubby for Kevin Kolb and his snake killing prowess. I was at the Phillies Nats game last night and the Philly fan next to me was bragging about his Eagles' Sonny Jurgensen and A.J. Feeley jerseys. Eagles fans know QBs: 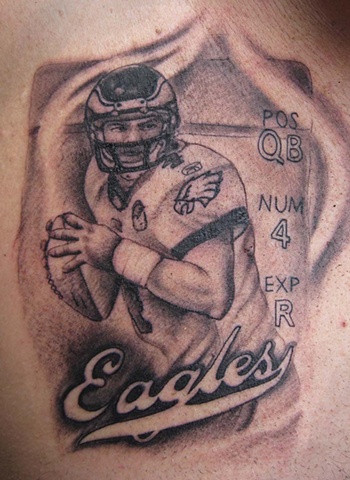 4.) Let's Cut Our Star WR and Let Him Go To our Rival. We all know you love DJax. You can pretend all you want it doesn't bother you he walked and you don't need him...but you might as well be spinning an Oreo cookie against your ear trying to tell anyone that cutting him and bringing no one else in is A-OK. DJax has single handedly killed the Redskins and Giants for years - posterizing Laron Landry and Matt Dodge in stellar fashion. The fact Chip Kelly kicked him to the curb like Dan Snyder does his season ticket holders just HAD to sting. What the hell do you do with your 100,000 DJax jerseys? "But but but...Chip went 10-6...we believe in his decision."  DJax had a career year in receptions, TDs, and yards in 2013...but yea, beat it chump. The combination of our racist white WR and geriatric, Mizzou WR, who missed all of 2013, can totally make up for that!!! Good luck with that. The Eagles in 2013 had the highest yards after the catch (7.02 yards) since they started recording the stat in 1992...yea, you won't be missing that when Nick Foles is in 40% more 3rd and 2 situations throwing to a newly acquired Jabar Gaffney or Reche Caldwell.

5.) Nate Allen. Holy crap...Nate Allen is first on the depth chart? And you're still thinking 10-6?! Nate Allen has a special place in the heart of Redskins fans since that is who the Birds drafted with the botched McNabb trade. Players drafted after Nate Allen: TJ Ward, Rob Gronkowski, Zane Beadles, Daryl Washington, and Jimmy Graham. Standing golf clap goes to the Eagles brass on that one. But you'll be damned if you admit he sucks...we'll keep starting him! Nate Allen was the only Eagles defender last year with a 0% success rate against the run. That's what every team looks for in a Strong Safety!!

6.) OLine. The Eagles made it through the entire 2013 season with their OLine intact. That simply won't happen again. Lane Johnson is already out for four games and you have a guy named Allen Barbre starting that's been on four teams in four years....what could go wrong?

7.) Special Teams. Your rookie kicker just had this gem of  a quote: ‘I Know I Still Look Like I'm 17.′ Does this sound like a cat that can handle the drunken 40 year old Philly fans who think they're still in their 25 year old prime? The Birds are going to be mediocre the first half of the season and this baby face is going to be the fall guy. The Eagles are good enough to be close in every game...and a tweener Bieber look-a-like will decide several games. Good luck with that. 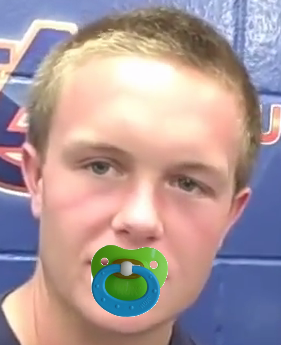 8.) Deulsional Backups. Every team gets injuries at the WR and RB position. Who does Philly have on their depth chart as backups? Jeff Maehl, Josh Huff, Jordan Matthews, and a geriatric Darren Sproles. And GOD FORBID anything happen to Foles....Lord Butt Fumble enters the game. Philly fans will be booing Sanchez before Foles is even helped off the field.

9.) Oregon FDucks. Chip now has SEVEN Oregon players on his team. Recreating one's college roster totally translates in the NFL. It worked for Spurrier...Saban...good luck with that Chip. I'd have more respect if Chip added Oregon players with actual talent like LeGarrette Blount, but no. Only white players are allowed on his team that can be raging assholes. All of America laughs at you that Casey Matthews is still part of the NFL. But hey...the Eagles brass can still say it's not a wasted draft pick since he's still on the roster. (golf clap).

10.) Loserville. It's Philly....the Chicago Cubs of the NFL (Well, you Jacksonville, Minnesota, Cleveland, Buffalo, and all the other sorry franchises). If you haven't won a Super Bowl now....why would you win now letting your star WR walk and the other 8 reasons above?

Bonus: Four years ago, the Eagles gave up two third-round picks and the No. 24 selection so they could move up to No. 13 and take pass-rusher Brandon Graham. Those picks only happened to become Dez Bryant, Ed Dickson, and Eric Decker. Does that make Graham's total of 11.5 sacks in four seasons feel disappointing? At least you're not starting him any more. Progress!