The Redskins officially fill out the practice squad today.

Yesterday the Redskins announced the signing of safety Jamarca Sanford and the re-signing of cornerback Richard Crawford to the 53-man roster.  They also announced the signing of offensive tackle Terren Jones to the team's practice squad, which still left one spot open on the 10-member squad.  OLB Gabe Miller was cut following the Thursday night game against the Giants, but his agent tweeted that he would be rejoining the team on the practice squad.

This move would have filled out the practice squad, but the team made an additional move today.  They officially announced that the two players that were cut from the active roster would both be signed to the practice squad.  Defensive lineman Robert Thomas was signed the day of the Giants game, but was not active.  He was cut and expected to be re-signed.  To make room for both players the Redskins have released Hebron Fangupo, a defensive lineman that the team picked up two weeks ago. 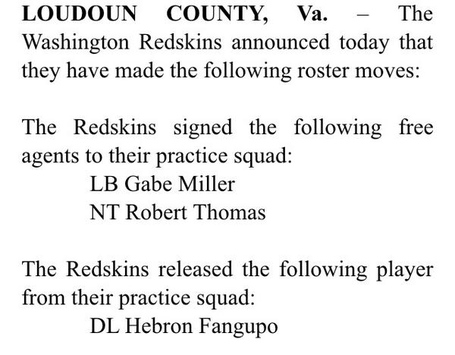