Despite losing late to the Eagles, the Indianapolis Colts may have exposed a welcome weakness in the Eagles' defense that could fall perfectly into the Redskins hands on Sunday.

The Indianapolis Colts are not known as a running team. With Andrew Luck, Reggie Wayne and T. Y. Hilton on their roster, they tend to lean towards the pass, with the running game serving a game management role.  In week 2 however the Colts ran for 169 yards against a typically stout Eagles run defense. This almost put them in a position to win before the Eagles took advantage of a late interception by Andrew Luck to wrap the game up.  Let's look at some of the features of this and see what the Redskins might look to replicate on Sunday.

One common theme was the use of run heavy formations. When I say run heavy, I mean 8 linemen and one full back, all available to block for Richardson and Bradshaw.  This formation brings the whole Eagles defense up into the box and makes it a narrow field - exactly what the Colts are looking for... 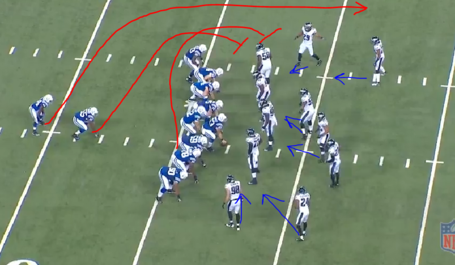 After the snap, the Colts pull the right guard round to help the full back seal the left hand side of the line, trapping the Eagles defenders inside and giving Bradshaw a free run outside for 29 yards. If Bradshaw had the speed, this would have gone for a TD. 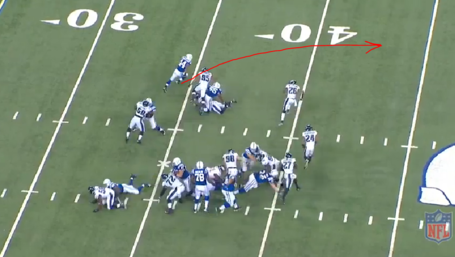 The Colts also liked to stack up one side of their line and then attack the weak side to throw the Eagles off guard. 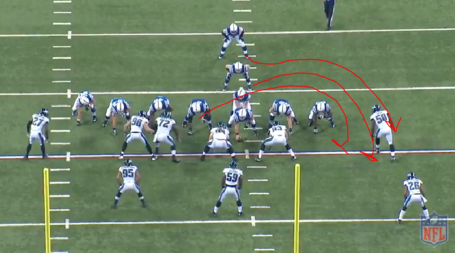 Look how the Eagles are lined up to the strong side of this play.  The Colts however are pulling the right guard again and attacking the weak side with the same trap. 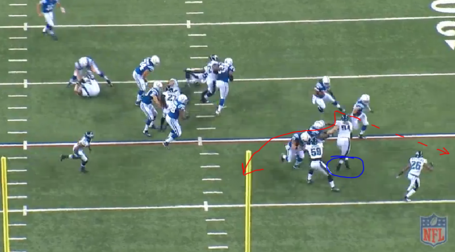 It is only because of one Eagles player shedding a block to make a play on the outside that Richardson is forced to cut this back in field for a shorter gain than it could have been.

This same play and formation was called over and over again in this game. Sometimes the RB would cut it inside, sometimes outside, or they would mix in a run to the strong side as well, but either way it brought success to the Colts running game and set up the rest of their game plan through the air, including this beauty from the 4th quarter... 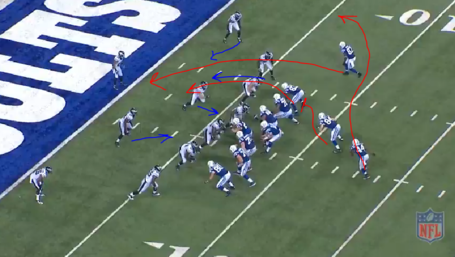 We have seen this before. Another run heavy formation. In the redzone the Eagles will be more than aware of this, but the Colts are running a passing concept to take advantage of the Eagles reaction to the run heavy offense they have seen so far.

The wide receiver and tight end ran slants across the formation from the right taking their defenders with them, leaving Bradshaw to run out to the flat unmarked (due to the rest of the Eagles secondary hesitating on the threat of a run). This one is a simple completion by Luck to Bradshaw resulting in a touchdown, and all set up through relentless application to the running concepts above.

The Redskins will have noted this potential weakness in their film study, but I am also sure they recognised that the Eagles shut down the Jags running game in week one (not hard on recent evidence), and typically the Eagles are pretty good in this area, so they will approach with a degree of care. These concepts are all straight up power running and trap plays, whereas the Redskins run a lot more zone, so look out for the counter zone by Morris (or more likely Helu) on Sunday as the Redskins test this weakness out.  In the Redzone I would pay attention to Young breaking out into the flat.

More than usual the success of the Redskins running game is perhaps the key to the whole game, as it helps keep possession and take the pressure off Kirk Cousins.  This then keeps the Eagles up tempo offense off the field and gives our defense a much needed rest. If we have seen one thing the last couple of weeks, this is crucial when gameplanning for the Eagles, who have made two late comebacks against flagging defenses.