Throwing Some Cold Water On A Scorching-Hot RGIII Take

Share All sharing options for: Throwing Some Cold Water On A Scorching-Hot RGIII Take

While I don't deny that Griffin can use some work in his game, Reid's attack seems strictly personal and I'm not sure how much of his 'advice' has to actually do with football.

Let's put on something fire retardant and take a look at this masterpiece shall we?

Even during Griffin’s electric rookie season, some within the organization and others close to it raised concerns about Griffin displaying a know-it-all attitude.

Ah, yes. The anonymous source(s) makes its appearance only four sentences in. I wonder who that could be? Something always smells fishy when the ANONYMOUS SOURCE is involved. 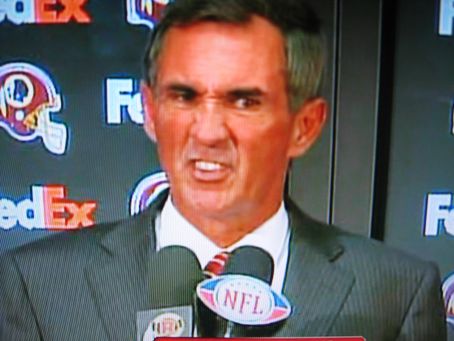 Griffin’s confidence only increased after he was selected as the NFL’s 2012 offensive rookie of the year. We know what happened next: Emboldened by his success, Griffin pushed for changes in the offense he was not ready to execute.

What was Griffin thinking pushing for these offensive changes? If it was up to me he would have ran 400 more designed runs...knee brace and rebuilt ACL be damned.

It was like the Big Bang of the 2013 season. The universe suffocated. Moons were formed. Life as we know it began with that clash. Also, a big part of last year's 3-13 season was a $36 million salary cap hit, a historically awful special teams unit and one of the worst defensive groups in the league.

Whenever new Coach Jay Gruden speaks, Griffin listens. Although Griffin finally wised up and again became receptive to coaching, he still needs more help than Gruden, who is responsible for the entire team, has time to provide.

Okay, what are you getting at Jason?

That was evident on the first day of training camp, when Griffin separated himself from everyone else on the field by wearing a black sock and a black cleat and a white sock and a white cleat.

SOMEONE GET MY FAINTING COUCH! FAST!

Aside from the different colored jersey that separates the quarterback from other players, Griffin was wearing...I'm sorry, give me a minute to compose myself...

Griffin explained it was something he has done since college to represent the "yin and the yang. White and black working together. We’re all brothers. We’re doing it together." Okay. Whatever.

Yeah Robert. Wearing different colored shoes is a sure sign you haven't been humbled enough. Luckily Mr. Reid has some pie (humble that is, not blueberry...you haven't earned that yet) for you. And if you knew what was good for you Robert, you'd show some respect and show up to training camp in these. 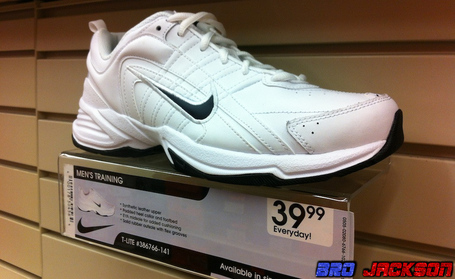 Now those scream "I go to work everyday and have accountability."

How could Griffin think it would be a good idea to stand out from his teammates on a day that marked a new beginning for the group? And Griffin’s insistence on clinging to his college days is tripping him up in the pros.

There’s nothing wrong with having fond memories —

Griffin promotes his brand on social media so much, you wonder whether he has time to do anything else.

That's not to suggest Griffin slacks off in the film room.

Actually, that's exactly what that suggests or implies.

Gruden has no issues with Griffin’s commitment to learning his craft. It’s just that Griffin seems to crave the spotlight. That’s not a good look for someone teammates look to for stability.

So Griffin craves the spotlight? But as soon as all of his teammates look to him (you know, spotlight) it's not a good look to crave the spotlight? I'm confused. Is he supposed to sit in the corner silent? Should he go into the witness protection program, then reappear with a fake nose and glasses?

A good mentor could teach Griffin much of what he lacks.

He lacks matching shoes apparently. Where can he find someone to help with this?

Luckily for Griffin, the ideal person for the job works in the same office. Doug Williams, who rejoined the franchise in February as a personnel executive, saw it all during a nine-year NFL career.

Can RGIII benefit from Williams' knowledge and experience? Sure. And Williams did see it all in his nine-year career. He also saw arguably the best offensive line in history in front of him, along with Art Monk, Ricky Sanders and Gary Clark.

The former Super Bowl MVP’s office door is always open. Griffin, however, hasn’t walked through it nearly enough, people in the organization say.

If you're going to start with anonymous sources, might as well end with them.

Besides, if Griffin is spending all of his time waxing poetic with Williams about the 2nd quarter against Denver, when will he have time to study film? Or find time to change his shoes?