Hazard's Huddle: Plays Left on the Field vs. Jacksonville Jaguars

An All-22 film look at some plays that may or may not have been good, but certainly could have been better.

Share All sharing options for: Hazard's Huddle: Plays Left on the Field vs. Jacksonville Jaguars

After a 41-10 victory, it's hard to criticize the final result. But with the understanding that nothing is perfect, the players and coaches will go back to the film room and still finds tons of things to mold and correct. Here at Hogs Haven, we will do the same. Here's a few of the plays that were left on the field on Sunday: 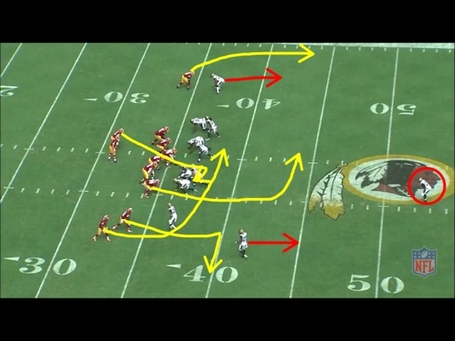 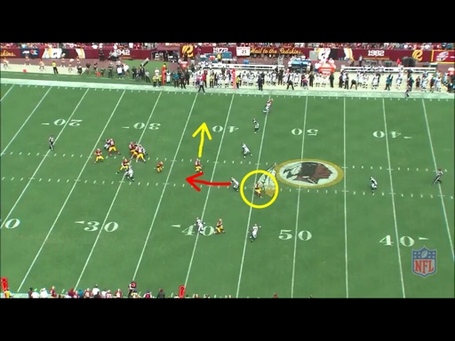 The LB doesn't follow Grant on the drag but DOES come up on the RB releasing out of the backfield. This opens up Niles Paul on the in route. 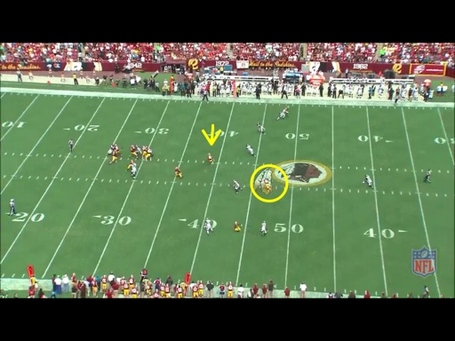 Cousins ends up throwing it to Grant on the drag route and is short of the first down forcing a punt. A pass to Paul would have been a first down. 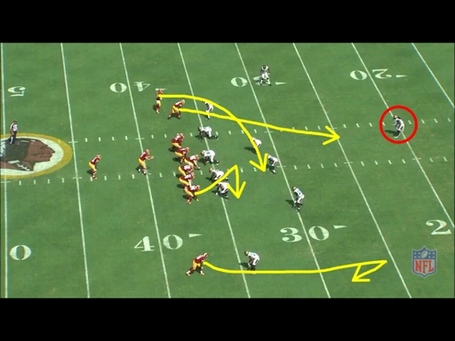 2. Play-Action from Pistol with a bootleg right. Has a zipper route, a crossing route and a comeback on the outside to choose from. 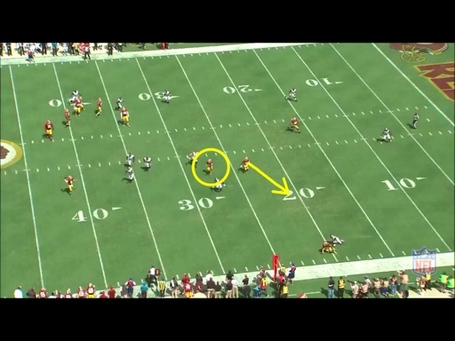 Cousins gets his head around on the play-action but hesitates, he spots Niles Paul running between two defenders but Andre Roberts is actually running free behind him and still climbing. 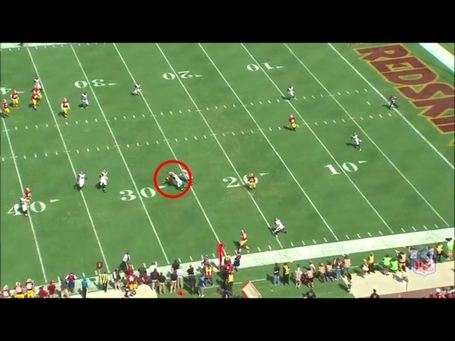 Cousins hits Paul who makes a good catch in traffic and takes a hit. Obviously, a pass to Andre Roberts would have netted more yardage. 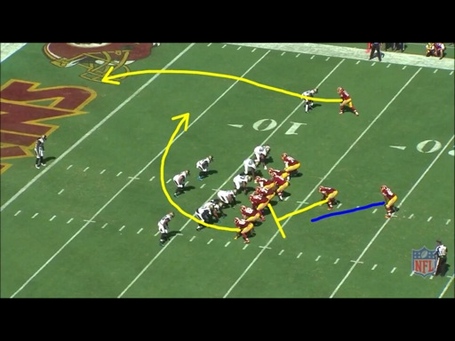 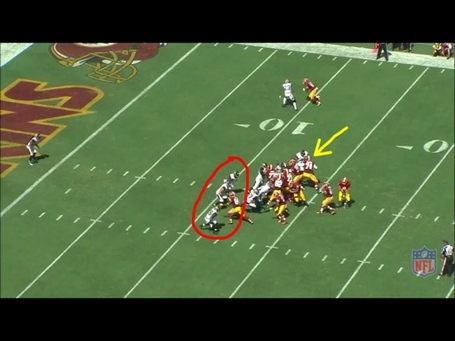 The run fake brings up three defenders to meet Darrel Young and Alfred Morris at the point of attack while Niles Paul slides right by them. On the other side, Tyler Polumbus gives inside support and Red Bryant (who was lined up on Tyler's outside shoulder) has a free run at the QB. 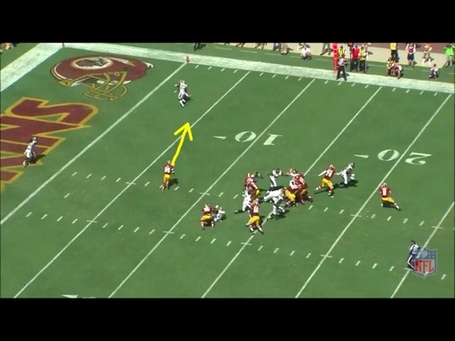 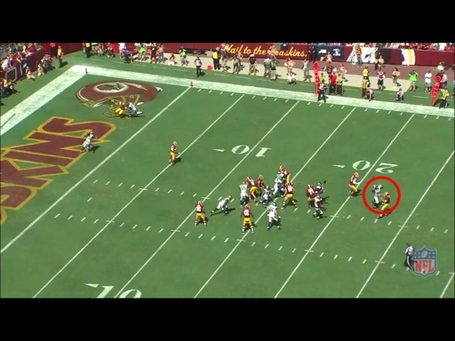 Instead, Cousins has to throw off his back foot and floats the ball out there. 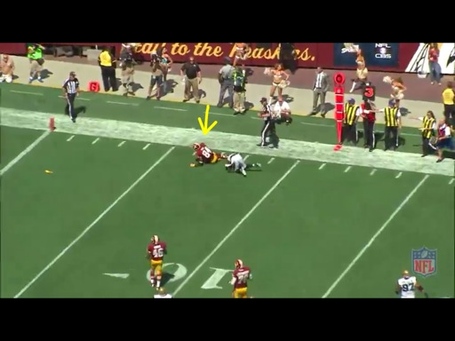 Niles Paul makes the catch and gets a good gain but it should have been a touchdown. 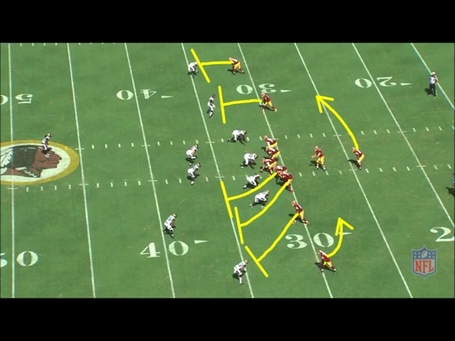 4. This also could have been a touchdown. Fake wheel screen, Alley screen left. 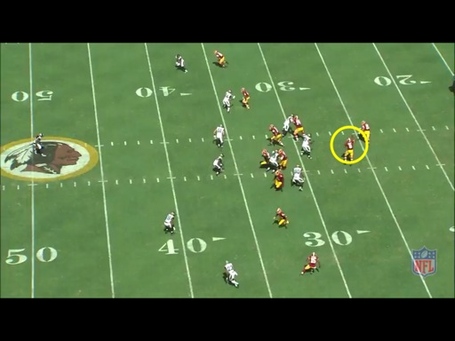 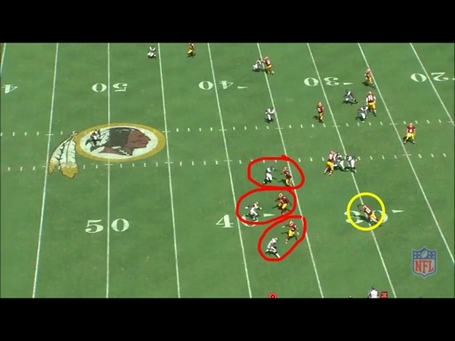 Cousins comes back and throws the Alley screen left with a great throw out in front of Aldrick Robinson. Shawn Lauvao, Trent Williams and Ryan Grant are all in front to block. Three on three. 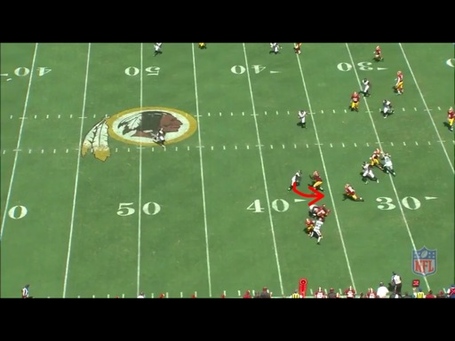 While Grant boxes out the CB and Trent Williams pancakes his block, the Jaguars LB is able to push off of Lauvao, sending him backwards into Robinson. 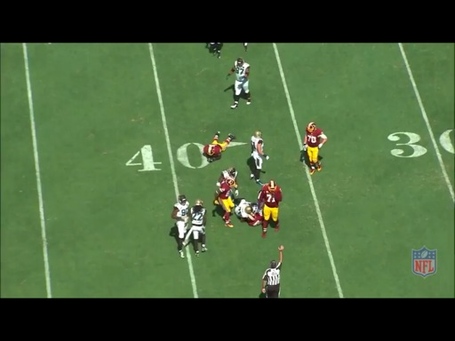 Robinson is then tackled with little gain. 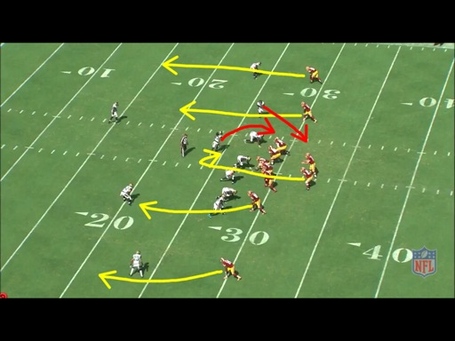 5. Kirk Cousins is going to need to recongize these blitzes. Jaguars coming with an overload DB blitz to the right. Redskins are going 4 Verts. 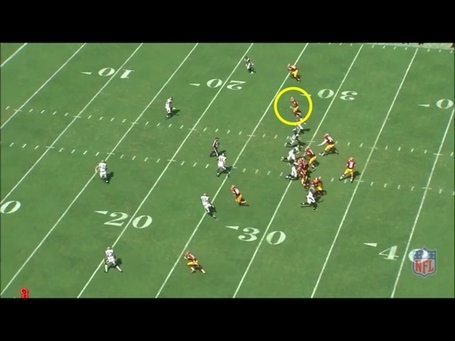 Andre Roberts recognizes it. He stops and looks back to Kirk as the "hot read" on this play. Cousins doesn't look. 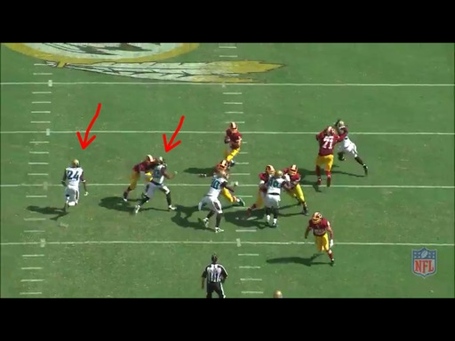 Because the blitz was not recognized, there was no slide in protection leaving Tyler Polumbus to block two guys. You're taught to block inside out but Polumbus hesitates and only gets a piece of the inside blitzer. 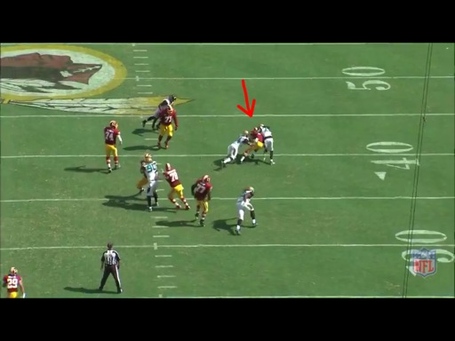 The DBs end up having a meeting at Kirk Cousins. 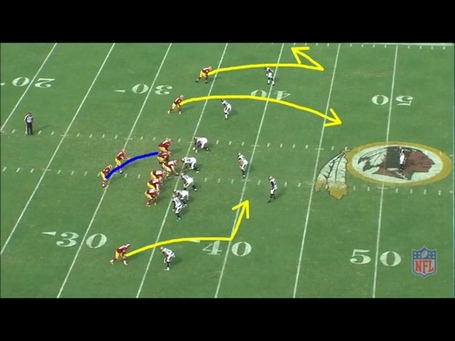 6. This is a play-action shotgun sweep. Redskins running a deep comeback and a seam route to the Twins side. 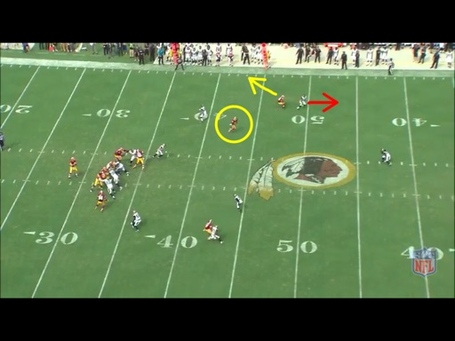 Cousins pulls the ball from the play-action and should probably throw it to Andre Roberts who is wide open in the seam. Something about getting him the ball in space leads me to that conclusion. But the Jaguars have a CB at the top bailing and Garcon is breaking on his deep comeback, also coming open. 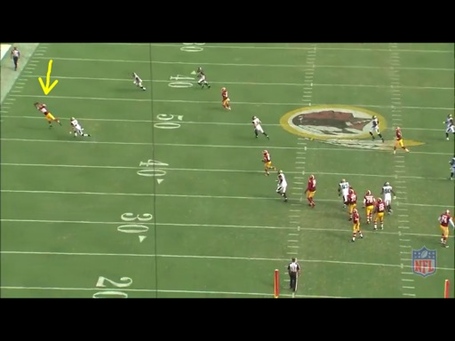 Cousins puts the ball out towards the sideline and Garcon makes a great catch. Just wonder what Roberts would have done with the ball in space. 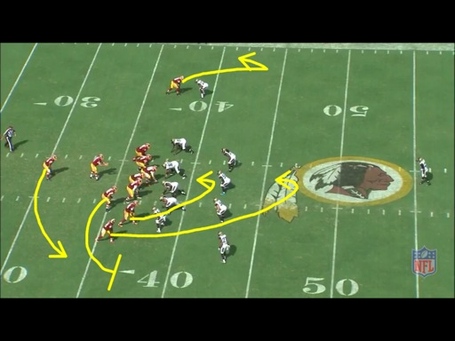 7. JAX is in the Cover 3/1 and Cousins decides before the snap he's throwing to Pierre Garcon at the top of the screen on the hitch. 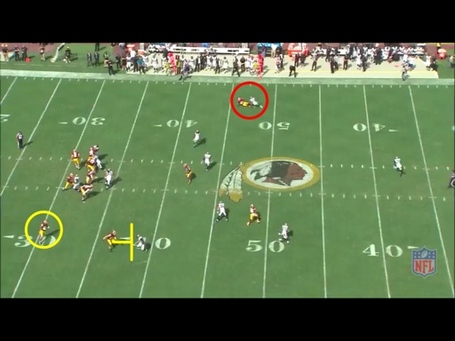 Garcon falls coming out of his break so the play had little chance but look at the bottom of the screen. Alfred Morris was running a wheel route with Logan Paulsen wheeling out and blocking. May be a play they come back to when expecting a Cover 3. That curl ended up preventing the defender from going into the flat. 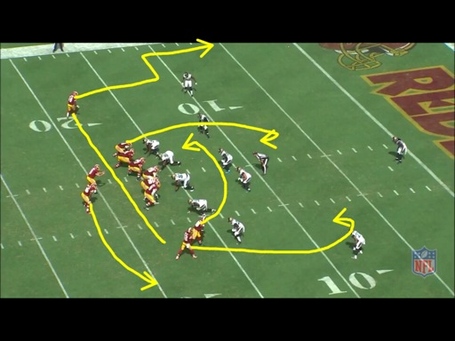 8. This missed opportunity is purely timing. Ryan Grant motions from the Trips Bunch to Isolation Left. No one follows him so that alerts Cousins to Zone coverage (Cover 3). 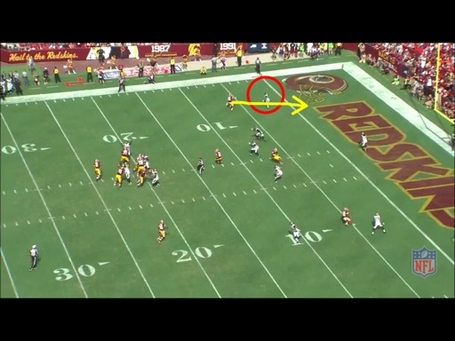 The double move takes so long to develop because the CB played so far off. Grant had to eat up enough of his cushion that he would actually bite on the out route. I remember Jerry Rice once ran a 30 yard comeback in practice with the Raiders. Jon Gruden asked him why his comeback was 30 yards. Rice said because that's how long it took for the CB to turn his hips. A route or move won't work if you can't get a CB to turn his hips.

Because of that, the timing of the play is off and Kirk Cousins throws to an open hole where there is no one.

Like I said, even after a 41-10 victory, there are plenty of things to correct. To all those trying to drum up a QB controversy, no matter who is behind center, there will be mistakes, there will be growing pains, there will be adversity, but above all else, they will be a Redskin. Because of this, we should cheer them as such.