An All-22 film look at some of Kirk Cousins' top throws from this past Sunday.

I can not begin to describe how much fun it is watching film after a game like that. As a Redskins fan, it's not too often that we win by a 31 point margin. As I started film, I ended up just charting every single one of Kirk Cousins' throws from Sunday. Since 120+ screenshots doesn't exactly fit the "blog" format, you can check my twitter timeline HERE if you're interested in the whole breakdown. For this post, we're just going to be looking at my top 5 favorite throws in this game. 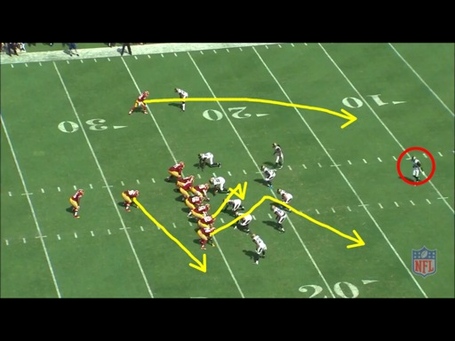 Jacksonville is playing that Cover 3/Cover 1 Seahawks Hybrid defense. This is a play-action bootleg that sees, Darrel Young go into the flat, Logan Paulsen runs a zipper route, and Niles Paul runs the deep corner route. 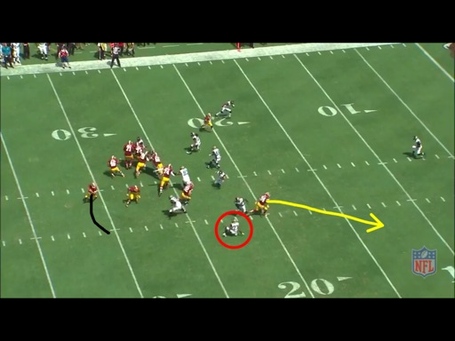 Dwayne Gratz, who is responsible for the deep third at bottom of screen, slips when he realizes it's a play-action. This is all Niles Paul needs. 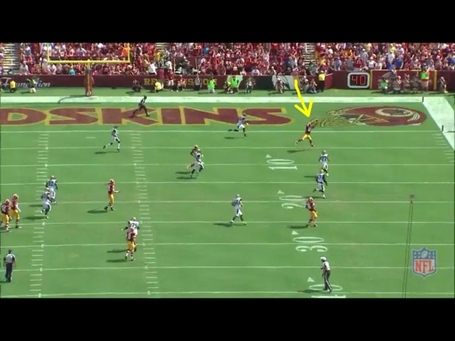 Kirk delivers a ball out in front of him and Niles Paul makes a great catch even if he falls down. 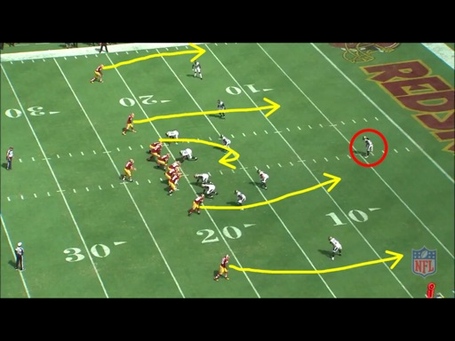 If you've read any of my past Jay Gruden offensive breakdowns, then you won't be a stranger to this play call. Gruden LOVES calling 4 verts (4 vertical routes) from this part of the field. It stresses a lot of defensive coverages. Jaguars appear to be in a Cover 3. 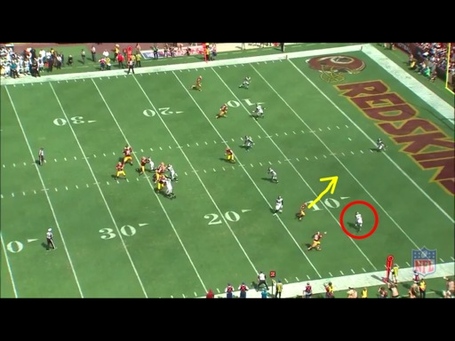 There was a "why isn't Cousins throwing to Garcon" crowd during the game Sunday. This is Cousins first throw and he wanted to throw to Garcon in the slot. The outside CB crashes on the route though. Why you would crash on a route from the slot when you were lined up over a player is beyond me. Because he's a fullback? Maybe. Either way, this isn't your regular fullback. 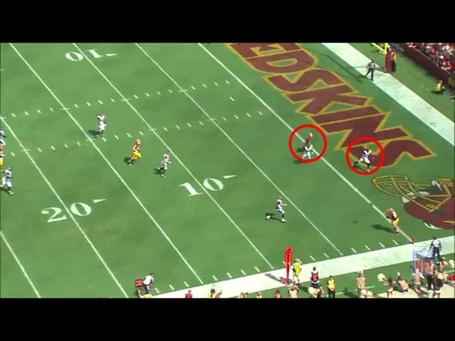 Cousins does a good job of seeing the CB crash on slot, re-loads, and fires it to the outside for a touchdown to Young. 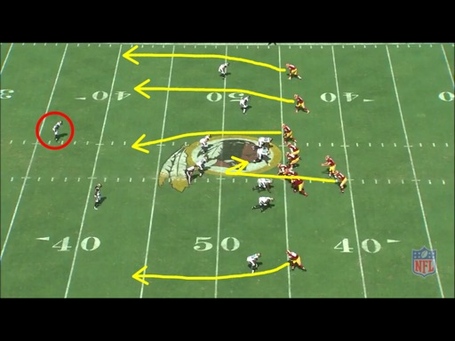 Here is the 4 Verts again with the dump off release valve but this time from Y-Trips. Jaguars playing with a single-high safety. 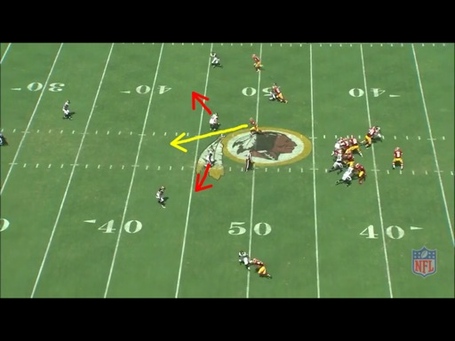 Both the LBs in the middle of the field split to their zones and ignore Paul who runs right between them. 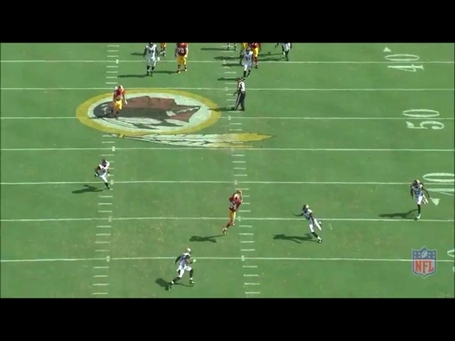 Kirk delivers a good ball, Paul goes up knowing he is going to take a hit, catches the ball at its highest point and braces for the impact. 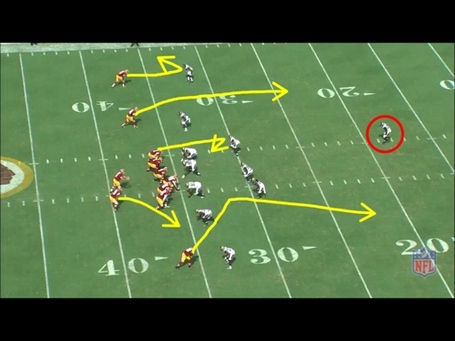 This play is a Jay Gruden favorite and is designed specifically to attack a single-high safety (which Jaguars run a lot). There was a lot of chess being played with this play all game long. Basically, the QB pumps on the slant and the WR breaks to the Go route. This is designed to pull the single high safety over top of the go route to prevent the "deep shot" which is all actually a diversion because the real target is the seam route from the slot on the opposite side of the field. If the Safety leaves the middle of the field to cover the top of the go route, all the slot WR needs to do from opposite side is beat his man to the inside and the middle of he field is free. Because the Jaguars were looking for it, at times, the seam route opened up the "Sluggo." 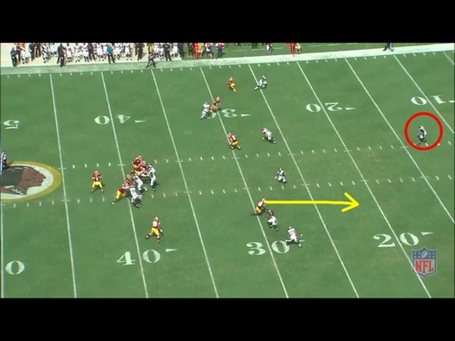 Now Dwayne Gratz hadn't played well all game so I think they were counting on him to not drop deep after Garcon broke so far inside on his slant route. Turns his route into a go after he passes another defender. 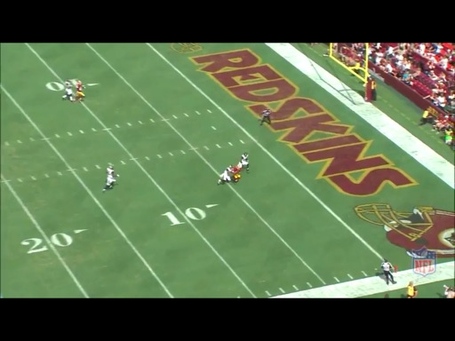 Gratz ends up dropping deep anyway and Cousins is able to drop it into the bucket between the CB and the S but the defender is able to knock it away. Still an excellent throw. 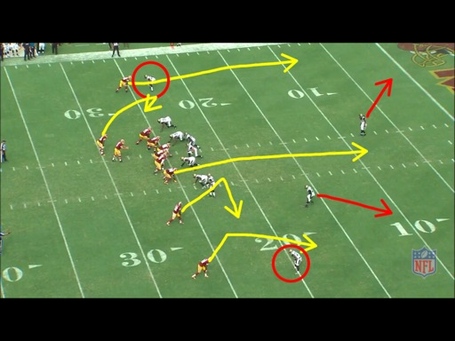 Jaguars are trying to disguise their Cover 2 Zone as a Cover 3. Ryan Grant is at the bottom running a "Sluggo." 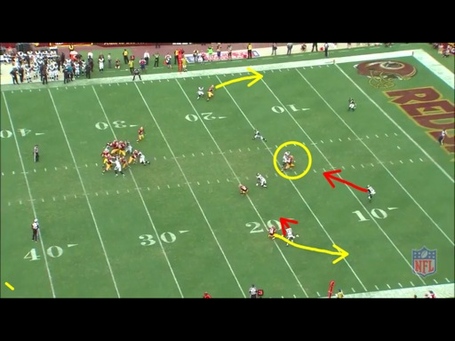 Garcon is actually open at the top of the screen down the sideline in a Cover 2 zone. At the bottom, Grant makes a hard slant cut which brings the CB up and turns up-field and goes right by him. Notice that the safety that is suppose to be over Grant is preoccupied by Niles Paul on a deep seam route. 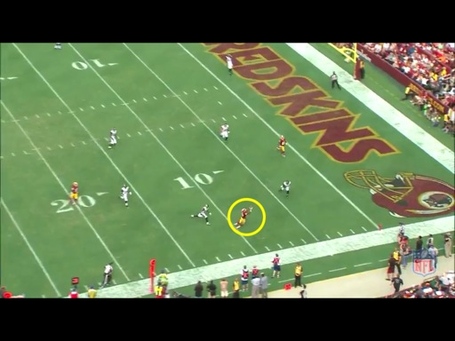 Cousins again drops it into the open space for Grant to run underneath it and make the catch.

Did I miss a throw that you liked? If there's enough commotion about a certain throw I'll put it up in the comments section but these ones just happened to be the ones that stood out the most to me. Later this week, I'll show that even though it looked like we could do no wrong, we still left plays on the field.