Where The Redskins Rank In...Well, Everything!

Through week two of the NFL season, where do the Washington Redskins rank among the NFL's elite?

Share All sharing options for: Where The Redskins Rank In...Well, Everything!

After week one of the NFL season, the Washington Redskins defense looked much improved. They held the Houston Texans offense to 10 points and only one big pass play. This was a marked improvement over the usual 28-point first half holes the defense had to dig out of last year.

Then came the Jaguars and Chad Henne. I'm still not sure if the Redskins are going to be hit with criminal charges or not for what they did to the Jags.

After a ridiculous 10-sack performance, in which the Jaguars didn't even run a play in Skins territory until the fourth quarter, Washington was sure to be highly ranked.

But it's not just the defense pulling their weight. The Redskins offense caught fire, scoring on seven drives against the helpless Jaguar defense.

Through a fortnight the Washington Redskins are, to say the least, improved. And the numbers prove it. OH, YOU DON'T BELIEVE ME?! SUCK ON THIS! 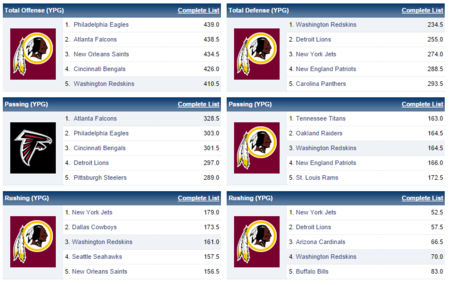 In all but one of the major offensive and defensive categories, the Redskins are in the top-five.

Oh, and the Redskins are number one in sacks with 10 and 4th in points allowed.