On Monday, Ryan Kerrigan hosted the second annual Celebrity Waiter Night at Ruth’s Chris Steakhouse in Arlington, VA. Mike Harar attended the event and was able catch up with Kerrigan and some of the other players who helped out.

Ryan Kerrigan has quickly developed a reputation for being a great football player on the field and a great guy off of it.  Last night, I was lucky enough to attend Celebrity Waiter Night, in which the players served as waiters for the evening and interacted with all who attended.  The proceeds went towards Kerrigan's Blitz for the Better charity foundation.  Along with Kerrigan were his teammates Alfred Morris, Ryan Clark, Gabe Miller, Niles Paul, Jackson Jeffcoat, Adam Hayward, Shawn Lauvao and Braxton Cave.

Fresh off my Sunday gameday sunburn and looking even more red than normal (which I had to explain to everyone I talked to), I was able to catch up with some of the guys and ask about the charity and the season so far. 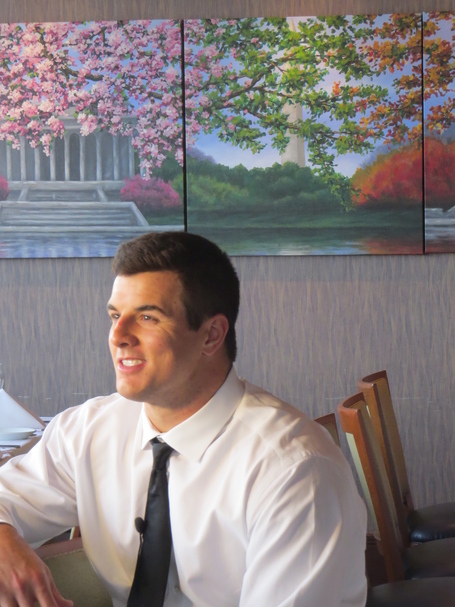 Ryan Kerrigan and his thoughts on getting four sacks and the defense overall last week against the Jaguars:

It was an awesome feeling all around because we were able to get such pressure on the quarterback consistently.  It was such a balanced game.  The offense moved the ball really efficiently.  We got off the field on third down and kept their defense on the field and that's a recipe for success.

On his Blitz for the Better Foundation:

We started this foundation two years ago with the hope of helping some special needs children and some physically challenged children and their family members in the greater Washington DC area.  We want to help them by providing resources and in particular, we wanted to establish Kerrigan's Corner in Children's National Hospital in which will provide a locker for extended stay patients at the hospital.  The lockers will be filled with iPads, Gameboys and different stimuli to make their stay a little better. 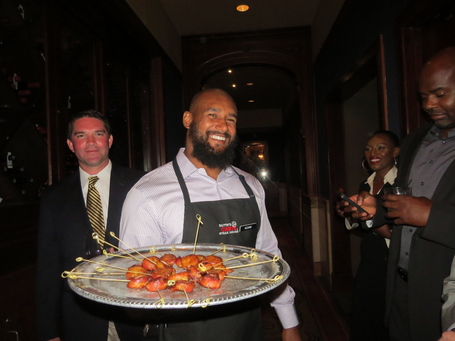 Adam Hayward on being in Washington and being named the special teams captain in his first year with the team:

I love the team, first off.  The atmosphere of this team is awesome.  It's just a bunch guys like myself that want to win by any means necessary.  We have a coach that believes in that, too.  I've known Jay (Gruden) for seven years now from back in Tampa Bay when I was under his brother (Jon).  Coming here was a no brainer once he got the job.  I do love it.  It's an honor just coming over here, from being the special teams captain in Tampa the last three years, and coming over here and the guys seeing me as that guy.  Being able to go out there and have fun and play a good game on special teams and lead the unit is awesome.

Niles Paul on his play at tight end so far this year:

I feel like I've made the transition (from wide receiver).  This year I feel like a complete tight end, blocking and receiving-wise.  I feel like I've taken the steps.  I worked really hard this offseason with Logan Paulsen, coach Wes (Phillips) and Jordan Reed.  Just working on little technique things, working on my strength and trying to become a more complete player.

Gabe Miller on being with the team this year:

It's been great.  This is a very cool and unique group of guys. I've been on a number of teams now and bounced around a little bit, so I've gotten to see different locker rooms.  One thing I can say about the Redskins, it's a lot of really good guys.  Everyone's pretty tight knit.  There's no cliques or anything.  So it's really cool.  And having the leadership we have with Kerrigan and (Brian) Orakpo, it's great for me.  I can learn from watching them.

Alfred Morris on being the fastest Redskins running back to rush for 3,000 yards: (He did it in the 34 games, topping John Riggins' team record of 38 games.)

It's an honor.  I know there's been a lot of great backs that have come through here.  It's kinda cool.  Especially with Riggins, you still see his jerseys all around the stadium and all around the DMV.  So to be able to beat him to that mark, it is cool.

On the team this season:

Last year we took a dip, coming off 2012 and making the postseason that year, and then only winning three games.  This year, I mean there's always some excitement to come out and play, but this year we have a different vibe about us; a different feel. We want to redeem ourselves from last year. 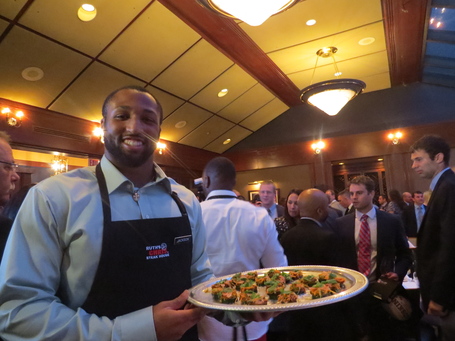 It was a fantastic night and a lot of fun for all who attended, and all for a great cause.  If you would like to learn more about Blitz for the Better or Kerrigan's Corner, please visit www.RyanKerrigan.org.