This article endorsed by Kurt Cousins.

Share All sharing options for: Five Things You Need To Know About…Kirk Cousins

Kirk Cousins was drafted at the same position and in the same draft class as Robert Griffin III. Initially resigned to life as a perpetual backup QB, Kirk has proven himself to be the consummate team player. Through all the trade rumors and barbs thrown at him, he has remained positive about how he can help the Redskins. So with a sunny disposition, here are five things you need to know about Captain Kirk Cousins.

#1. Kirk was once given a random drug test by the NFL at his grandmother's house.

NFL's off-season drug testing at my grandma's town-home! I'm all for a clean game but weird having a stranger watch u in your own bathroom

In other Cousins' grandparent news, after the death of his grandfather this year, Kirk bought his conversion van from his grandmother. He plans to use it as a tailgate machine for friends and family and as a commuter car to practice throughout the season. 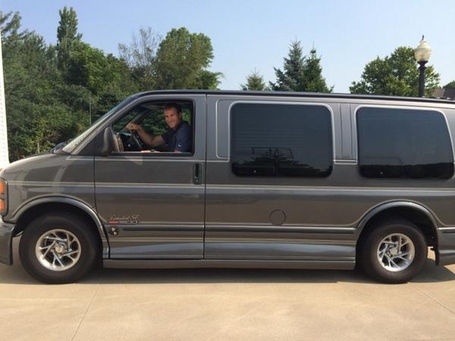 #2. After the 2012 season, a Grand Rapids, Michigan sports memorabilia store asked Kirk to make an appearance and sign autographs. Unfortunately for Kirk (a Michigan State alumnus) the store misspelled his name. 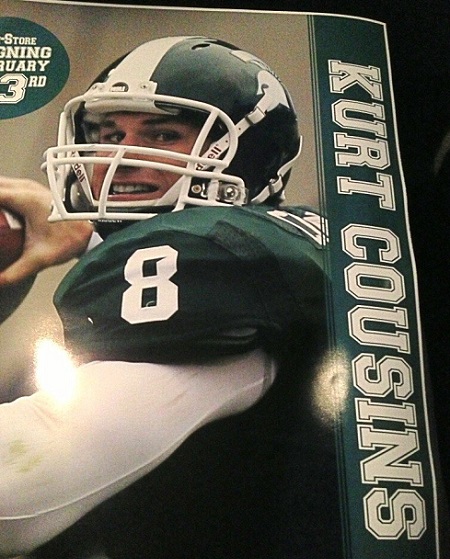 #3. Cousins threw one of the strangest Hail Mary passes while at Michigan State. In a game against the University of Wisconsin, the Spartans needed a miracle to win the game. On the Badgers' 44 yard line, with 0:04 left on the clock and the game tied at 31, Cousins threw a pass up for grabs into the endzone. The ball passed through a defender's hands, bounced off the helmet of Michigan State receiver B.J. Cunningham and into the arms of Keith Nichol, on the 1 yard line. Nichol collapsed across the goal line for the touchdown and the win. Initially ruled short of the endzone, the call was reversed after official review. Here's the play.

#4. Former ESPN journalist Rob Parker erroneously reported that Captain Kirk beat up the entire Michigan State hockey team. Turns out that Cousins was in church at the time and Parker was suspended.

#5. Cousins is serious about his nutrition. With the crazy schedule of an NFL quarterback, Cousins doesn't have much time for breakfast. "Every morning before I go to the training facility, I have a smoothie. They are easy on the go, and I don't have to take a lot of time in the morning or spend as much on groceries." Here is Kirk's own smoothie recipe, from everydayhealth.com:

Even when he's not beating up a hockey team during church or writing a book (Game Changer: Faith, Football, & Finding Your Way) Cousins is an active guy, ready for whatever is thrown his way. This will serve him well as he has been thrust back into the role of starting quarterback. So let's all grab a Strawberry Stiff Arm (NOT on the NFL's list of banned substances. Yet) and watch the season unfold. It promises to be interesting!