Robert Griffin III has a dislocated ankle and could miss significant time.

Robert Griffin III injured his ankle as he made his way towards the sideline to avoid a Jaguars defender.  Griffin was able to complete a 19 yard pass to DeSean Jackson before going out of bounds.

After attempting to stiff arm Paul Posluszny, Griffin's ankle landed awkwardly and bent the wrong way.  Griffin was down on the sideline for a significant amount of time before being helped to the back on a cart.  His left leg had a brace on it, as he waved to the crowd. 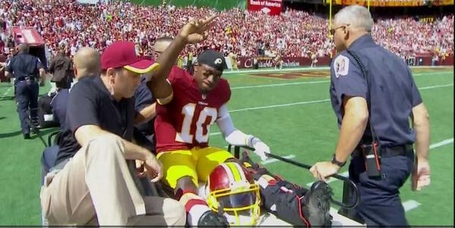 Some terrific photos from our crew here, including this one of RG3's injury: http://t.co/gC3sYnrTXg pic.twitter.com/zsBZfkEYaO #Redskins

During Jay Gruden's press conference, he confirmed that the injury was a dislocated ankle, but did not say how long he expected Griffin to be out.  Griffin will go for more tests tomorrow to assess the damage to his damage.

MRI tomorrow for RG3. Gruden claims no idea if he's done for the season.

Robert Griffin III also talked to the press after Jay Gruden and DeSean Jackson(also injured during the game) were done speaking.  He walked to the podium with the help of crutches.  Griffin said that his foot got caught in the ground as he planted and his ankle bent awkwardly.  He knew right away that something was wrong.  He will get tests tomorrow morning to see what the full damage is, and get a prognosis for the season.  He also gave his full support to backup QB Kirk Cousins and the rest of his teammates.  Griffin and DeSean Jackson were in the back cheering on the team as the dominated the Jaguars.

Several experts have weighed in with their speculation about the nature of the injury, and how long he will be out.  One of them is former Redskins Super Bowl winner, Dr. Mark Adickes who performed his first ACL surgery when he was at Baylor.  Adickes believes their could be a fracture along with the dislocation and that Griffin's season is effectively over.

RGIII has dislocated left ankle. These generally occur with fracture so I think he is done for year.

Dr. Ray Solano, a D.C. chiropractic physician, also feels that a fracture is possible with the ankle dislocation.  An MRI will be able to give Griffin, the team, and his doctors a better idea of what they are dealing with.  This injury could keep RGIII out anywhere from a few weeks(highly optimistic) to the full year or longer.

Kirk Cousins is set to be the starter with Colt McCoy backing him up until Griffin is able to come back.  This is a major setback for RGIII's development and the team's plans for the season.  The Redskins showed today that their depth was strong enough to defeat the Jacksonville Jaguars, but they will need to prove it's enough against other teams.  When Griffin comes back, people will be closely examining Cousin's performance as the starter, and I'm sure there will be many civilized, rational discussions about who should be the starting QB going forward.  Can't Wait!