Jaguars @ Redskins: How the Jags defended the Eagles running game

The Jags put up a good effort against the Eagles in week one, but ultimately came up short against one of the more potent offenses in the league. How did they tackle the Eagles running game and what clues could this give the Redskins ahead of their week 2 matchup.

Share All sharing options for: Jaguars @ Redskins: How the Jags defended the Eagles running game

The Eagles have an excellent running game, that mixes in some inside and outside zone. The Redskins utilise a lot of zone running, therefore I wanted to take a look at how the Jags defended this in their matchup last week - particularly in the first half before the Jags defense were worn down by the Eagles no huddle.

The Jags were successful against the Eagles inside and outside zone repeatedly in the first half of their matchup last week.  They accomplished this by recognising the possibilities from the Eagles formation. If an outside zone was in the cards the Jags would spread their defensive line out and have their defensive ends play wide 9 technique.  Their responsibility in the run game was to seal the edges of the Eagles zone running game and stop McCoy getting outside.

Let's look at an example...

In this screenshot Jags #91 Chris Clemons is the DE on the right, and is split out wide from the defensive line in a 9 technique.  The play will ultimately come to his side, but since the Eagles are in the pistol (a recent addition to the Eagles offense this year to enable them to run in either direction), we also have the strong side linebacker (LaRoy Reynolds) on the other side mirroring this alignment.

Clemons (#91) does a great job as he disengages Eagles Pro Bowl left tackle Jason Peters, freeing himself up to get upfield and make a play on the edge. McCoy has been taught to look at this as the key to his running lane.  If the DE is kept inside the helmet of the LT then he pushes it outside.  In this instance it is blatantly clear to McCoy that the edge is not where he wants to be...

McCoy has to stop and push this run either down the middle (which he doesn't like the look of) or cut it all the way back outside.  He chooses the latter option, and makes a play that only a few backs in the league can do, making a few defenders whiff before picking up 9 yards on what was a very well defended play by the Jags. Clemons did this repeatedly against this play design, and consistently stopped the outside zone for the Eagles. It all came from his original alignment out wide, which gave him the head start on the left tackle to seal the edge.

Let's look at the inside zone now, and this is more relevant to the Redskins as this is the bread and butter of our running game. 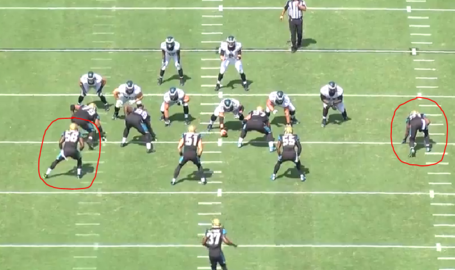 Look at the difference in alignment from the Jags. This is based on the Eagles formation - McCoy is lined up to the side of Foles. Since they know a run to the Eagles right is unlikely - despite having a tight end on that side - the strong side linebacker backs off the line and gets ready to help pick up a tackle when the play tries to break through the middle.  Also note that Clemons is still lined up out wide, as there is still a possibility that the Eagles run an outside zone here. 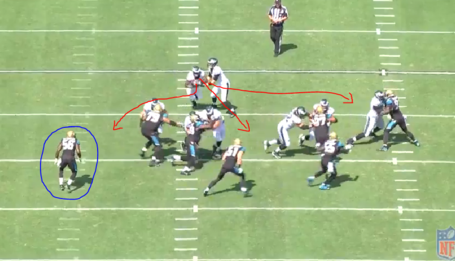 After the handoff, you can see the Eagles line trying to move onto their second level blocks and create an inside running lane for McCoy. LaRoy Reynolds (#56) is cautious from the threat of a read option or cutback on the play so holds his ground.  From this screen shot you would expect this play to be a success for the Eagles, as the two linemen should move on to block the linebackers and create a huge hole for McCoy.

However it doesn't develop fast enough as the Jags defensive linemen continue to maintain two blockers. Also look again at Clemons on the right end position, again pushing Peters back and cutting off any chance of an outside move by McCoy.

This play was forced to go inside.  The Jags shed their blocks easily and McCoy was tackled inside for a short gain.  The Redskins linemen will have to do a better job than this getting onto their second blocks and freeing up lanes for Morris and Helu.

It can be done though.  Sproles reeled off a 49 yard touchdown in this game with a simple inside zone run up the middle.  This play does have a huge disclaimer on it though as the Eagles caught the Jaguars out with a quick snap.  Look at this confusion seconds before the snap... 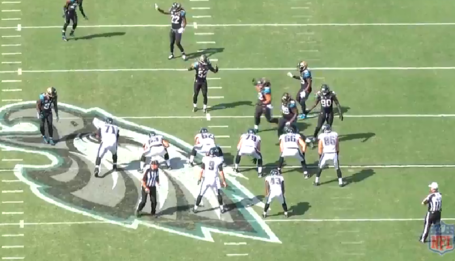 It is not surprising seeing the above that this play works perfectly for the Eagles.  The Center has a free run up to the second level to block one of the linebackers, while the other linebacker runs straight into the block from the RG.  Sproles takes it to the house without being touched. 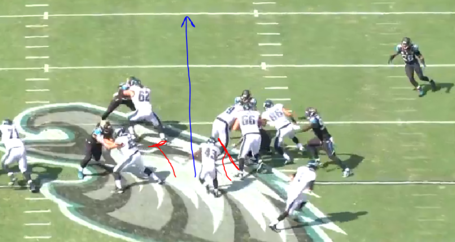 The Redskins will need to establish their running game quickly and efficiently in this tough matchup, and personally I believe they have the offensive line to do it. Yes, the line takes some heavy bashing for their pass protection, and rightly so, but they are one of the better run blocking groups in the league.

Take note of the Jaguars line and their positioning during the game to see how they take away the outside zone and force the run down the middle.

Either way this will be a key battle in the game as the Redskins attempt to draw more Jags defenders into the box and open up the passing game for it's talented receivers.