A mixed bag of thoughts and screen shots from the Week 1 loss to Texans.

If you follow me on twitter, you know when I watch through a Redskins game the second time to take notes for my film breakdowns that I like to capture screenshots of certain things I missed when watching it live. Because the NFL really messed up the All-22 film this week (only released a 1 1/2 quarters), I figured I'd blog my game thoughts and screenshots here. Without further adieu, let's try this out. 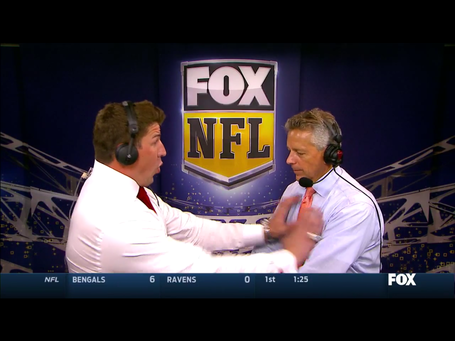 1. First off, is there anything more ridiculous than simulated game situations in the booth? Even if they are former players, this is still poison to the eyes of many viewers. No David Diehl, you haven't lost a step. 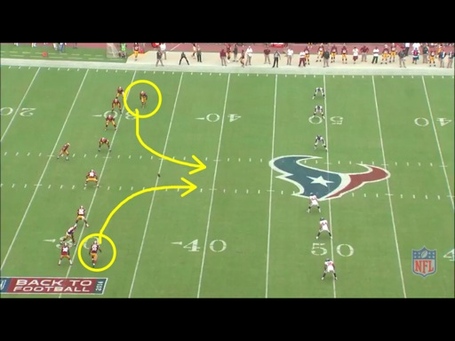 2. Ben Kotwica influence. I don't do a terrible amount of special teams film review but this is the first time I've seen this on kickoff. He takes two of his best special teamers (Adam Hayward and Trent Robinson), he has them play out as contain men and as the kicker starts his trot to the ball, they do the same and run down the middle of the field like wedge-busters. 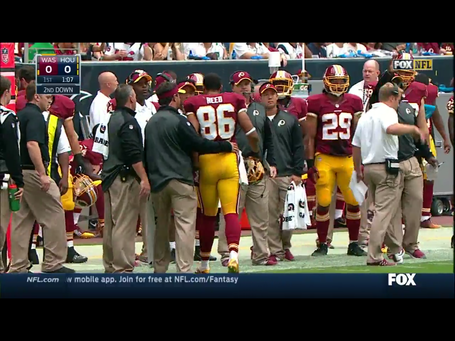 3. The loss of Jordan Reed is going to hurt. There are rumors that the coaching staff think he's injury prone and will never stay healthy. Jay Gruden's facial expression seems to support that theory. He has the look of "Ugh. I knew it." 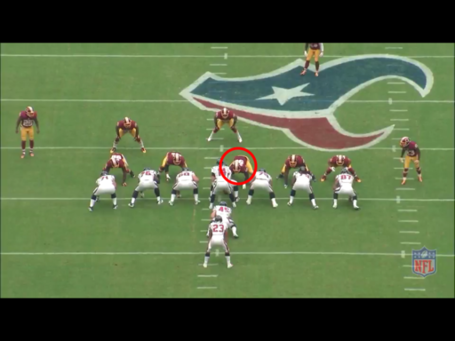 4. Barry Cofield is another player who is going to be missed after being put on short-term IR. He had a bunch of splash plays where he penetrated the middle of the O-line and really messed up the flow of the play. This was a particularly interesting one. Cofield is at NT and is lined up really low. 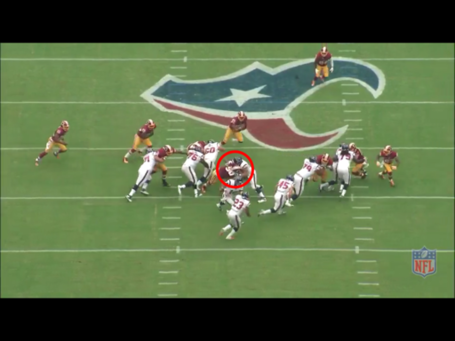 Cofield gets under C Chris Myers pads and draws a holding penalty immediately because Myers has no other choice but to grab him and throw him after that kind of leverage. 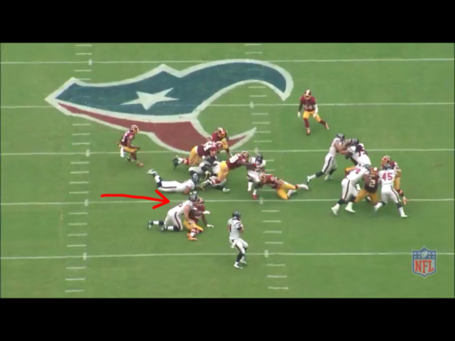 Um, what are you guys doing? This is a very compromising position, indeed. 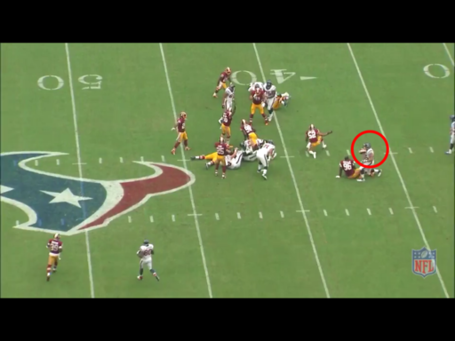 OH! Okay, apparently when Cofield exploded off the snap and got under Myers pads, he also got underneath his helmets and they somehow got stuck together. As you can see, Myers has his hands by his sides while Cofield's helmet is still lodged in his facemask. 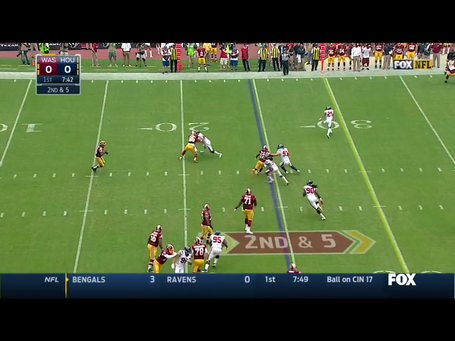 5. This is the play where D.J. Swearinger sacks Robert Griffin III. Someone had to have gotten the call wrong because both Jordan Reed and Andre Roberts are blocking here giving Griffin no one to dump the ball off to in the flat. In fact, I believe Swearinger blitzes when because he had one of them in coverage but they were both blocking. 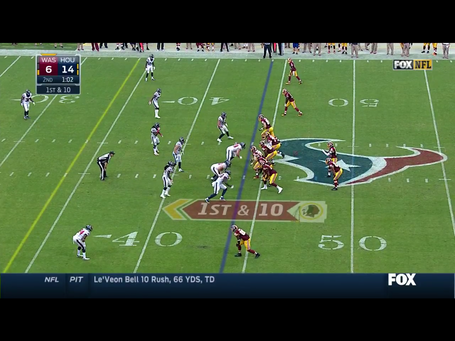 6. A couple people were mad that Robert Griffin III left Tyler Polumbus "out to dry" on this play by rolling out. Well, that would be a misguided criticism. This is a screen pass to Roy Helu. 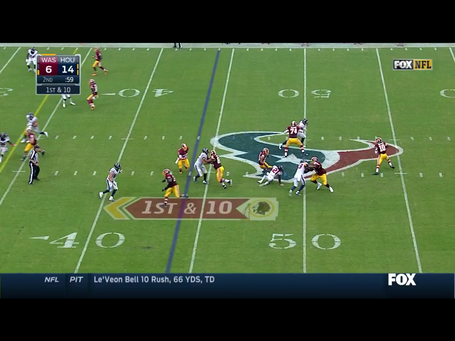 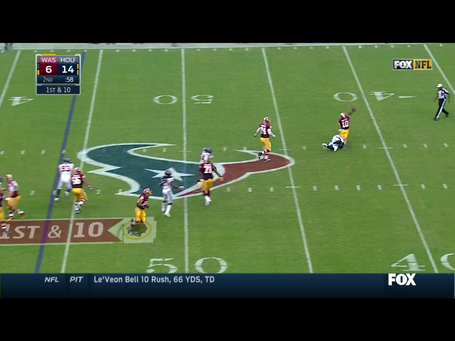 While I don't recommend rolling out to J.J. Watt's side, there was nothing else he could have done. He at least got the ball away. While this was a play that Rg3 got to much flak for, the next play is one he got too much credit for. 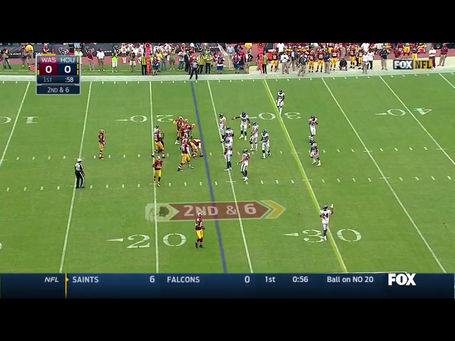 7. Rg3 comes to the line with two plays. This technically isn't an audible because you are calling the play based on personnel on the field. The Texans send out a bigger package (run support) so Rg3 spreads his guys out into an empty set. 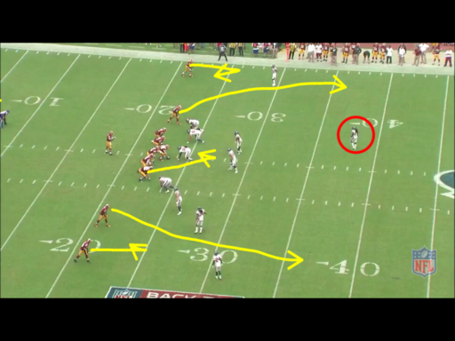 This is what the play now looks like. You have hitches on the outsides with outside release seams from the slot. This is a simple high-low read. The Texans show a single-high safety so it looks like either Cover 1 or Cover 3. RG3's job is to pick a side of the field and read that CB. If the CB sinks underneath the seam route, you throw the hitch. If he comes up on the hitch, you go for the seam route. RG3 is going to look at the top of the screen here at Alfred Morris (hitch) and Niles Paul (seam) where you can see the weakness in the defense (good). 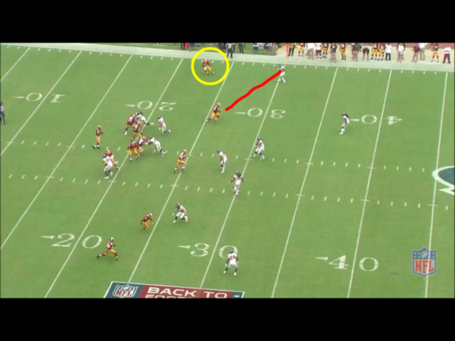 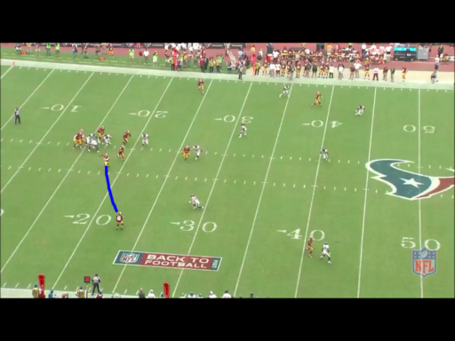 Instead, Rg3 scrambles and finds Pierre Garcon on the same read on the other side of the field and throws it to him before he crosses the line of scrimmage. Griffin was praised for this because he kept his eyes downfield, found another option and threw it instead of running it but I think he should have just taken the first option which was clearly open. You need to trust players to make plays. 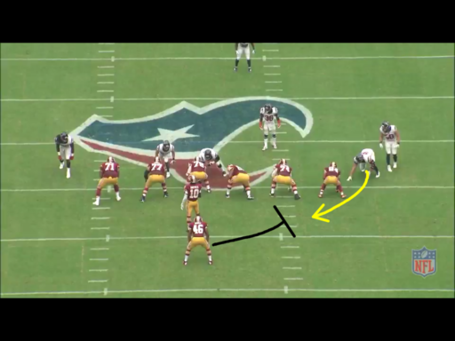 8. Speaking of Alfred Morris being on the field on passing plays. Take a look at him helping out with J.J. Watt. 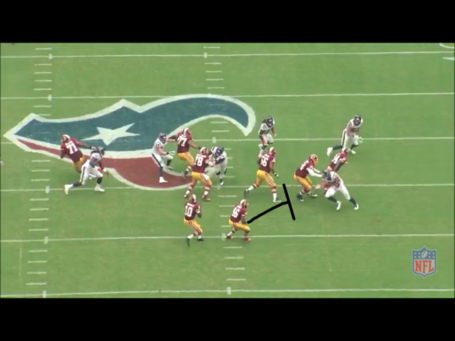 Watt takes a chip from Niles Paul and then bends the edge around Tyler Polumbus. 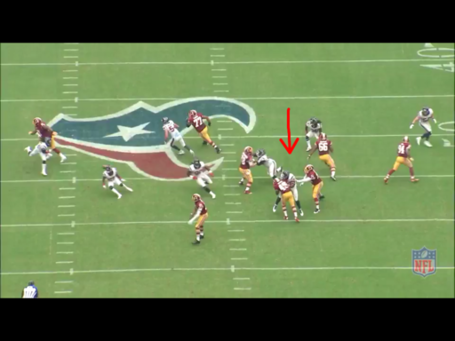 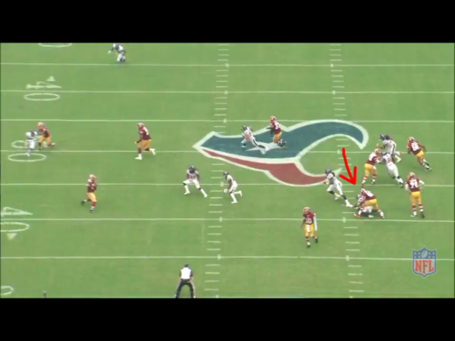 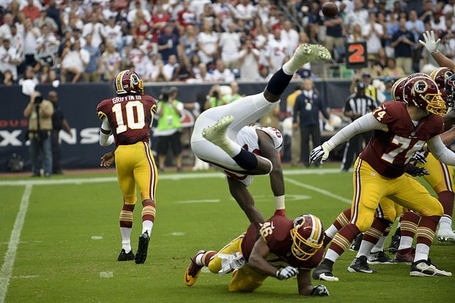 9. This was another good one by Morris that I think you've all seen this week. Alfred Morris chopping Jadeveon Clowney. This was the play that was billed as the play that took out Clowney while Clowney told teammate D.J. Swearinger that it was the field that hurt his knee. I looked back at the tape and found where he hurt his knee. 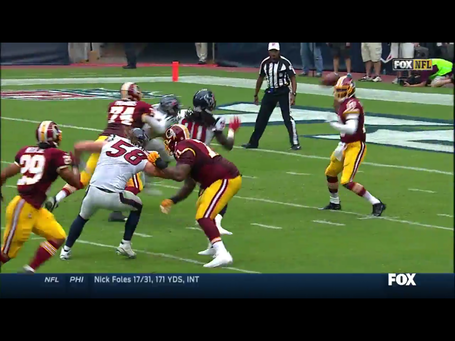 It was a screen pass to Roy Helu. You can see him in the foreground meanwhile Clowney is en route to Rg3. 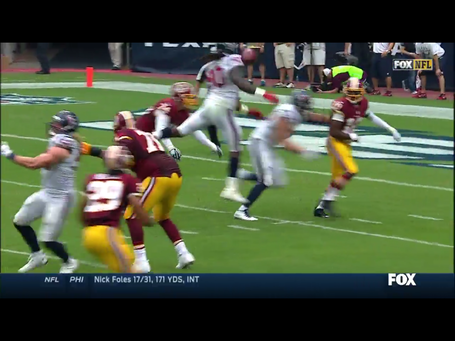 As Rg3 releases the ball, Clowney jumps high into the air to bat it down but Griffin manages to fit it past him. 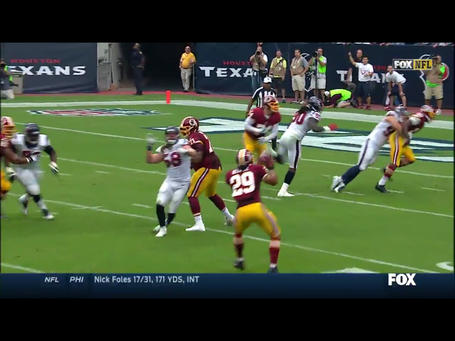 Clowney lands at an awkward angle here with his body weight being distributed all over the place. Didn't look like anything got stuck in the field (cleat). 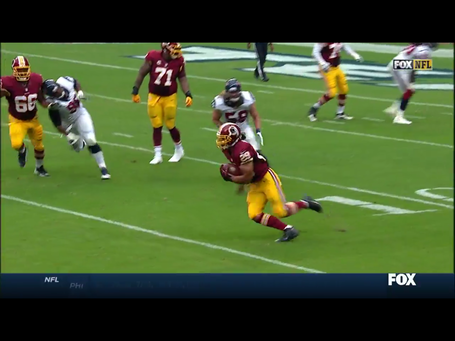 While Helu turns it up-field, you can see Clowney in the background immediately clutching his knee. 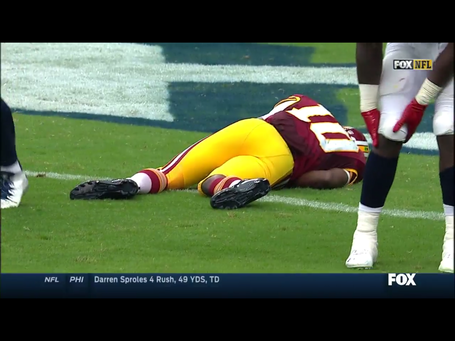 The camera then zooms in on Rg3 who was pushed down (why does everything always look like a car crash with him?) and in the foreground you see Clowney showing serious attention to that knee. He tries to play for two more downs on this series where he is hobbled then exited to field to the locker room.

Those were the random thoughts for this week. Sorry, there was no All-22. Don't think I'm not leaving awful messages for NFL Rewind to delete later. Hopefully you liked this and if it's popular maybe it can become a thing.