Oh boy, I can hardly contain myself. It's week two of the NFL season and the Washington Redskins are being visited by USFL team and 17-point-halftime-lead-blowers the Jacksonville Jaguars.

Nice job guys. You had one job. You had those insufferable GED holders with four-leaf clover tattoos right where you wanted them. WHAT HAPPENED?! We're you busy staring at this? 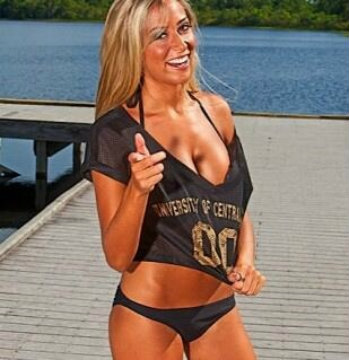 I can't say I blame you, but keep it in your cargo jorts boys.

This offseason the Jaguars signed Chris Clemons and Red Bryant from Seattle. Now Jaguars fans and beat writers keep talking about how the Jaguars "Plan to emulate the Seahawks' defense." Well, that's off to a good start. Is 34 second half points good? Is that Seahawks-esque?

As we all know, the Jaguars built a swimming pool in their stadium this year. But with Jacksonville fans piling in it's more like a Maryland Crab Soup...and probably smells like Old Bay. And remember to not wear your Old Navy jorts and K-Swiss dad shoes into the pool...you could drown, like a first half Jaguars lead.

When I was researching this article (yes, I research) I found two very sad facts.

1. In the last 15 years the best quarterback for Washington and Jacksonville has been Mark Brunell.

2. News 4 Jacksonville ran a story about the 15-year anniversary of this. 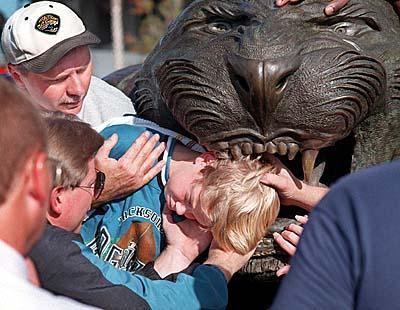 It's like "Well, are we gonna run a story about the anniversary of an AFC Championship loss? Naw, let's go with the kid that got his head stuck in a statue."

I mean, they're treating it like the anniversary of the OJ chase. DO YOU REMEMBER WHERE YOU WERE WHEN THIS KID GOT HIS HEAD STUCK?!

Of course nobody from Jacksonville remembers. They were too busy blasting Limp Bizkit and drinking Wild Irish Rose...which I'm sure is pretty much what you'll find at a Jaguars tailgate in 2014.

But let's focus on the game Sunday. I'm going to bring back my rap prediction for this game. Usually I use an artist from the city we're playing, but .38 Special and Lynyrd Skynyrd suck, so how about some 50 Cent!

Wish death upon me, Lord I don't cry no more

Don't look to the sky no more

Chad have mercy on me.

Now these Griffin doubters put a price on our head,

But we play the Jags this Sunday, we ain't dead.

Allen Hurns a diamond in the dirt, that think he found.

Remembers Henne throw to him, take off that crown.

When we play the Jags, something special every time.

Been knocked on the humble,

Swings the bat when he rumbles.

Show your ass what the DeSean do.

Got a temper n*gga, go ahead, lose your head

BUT FOR THE LOVE OF GOD DON'T TOUCH RGIII's LEGS.

I walk around jorts on my waist, chip on my shoulder

Till we bust on Gus Bradley's face, the beef ain't over.

Wish death upon me, Lord I won't cry no more

Cause the Jags can't run and score

Chad have mercy on me.