Before the third pre-season game, the most important of the pre-season games, there were reports about Morgan Moses and Spencer Long getting possibly getting snaps with the starters because improvement was needed on the right side of the offensive line. Morgan Moses never got his shot with the starters, but Spencer Long did. For one drive, Spencer Long moved into RG while Chris Chester moved over to center. Since concerns about that side of the line remain, let's take a look at how he performed. 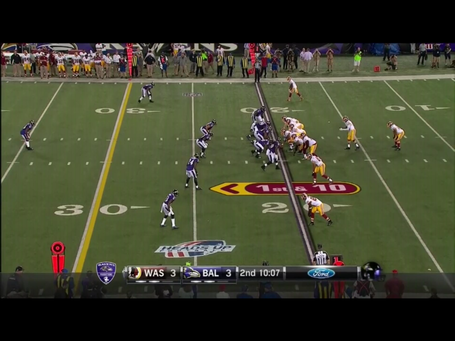 1. Spencer Long is lined up at RG in pass protection. 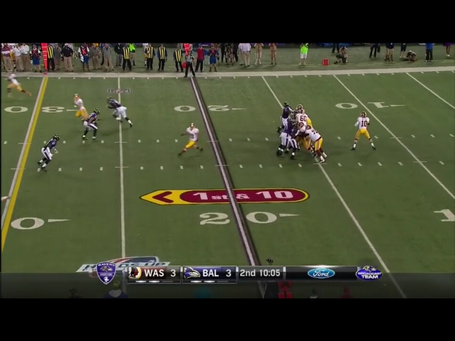 The DT makes a good swim move over Long's initial punch but Spencer is able to shuffle his feet to stay in front of him. 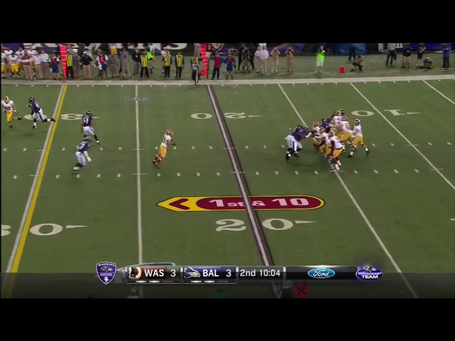 But while shuffling his feet, he wasn't able to set up a very good base and got pushed too far back. He's right in front of Robert Griffin III. 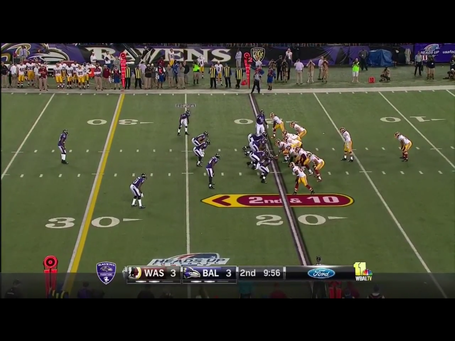 2. Spencer Long in at RG run blocking on an outside zone stretch left. 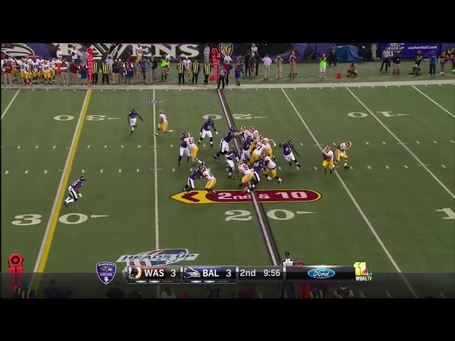 Long gets out in front of the DT with a hand on his chest while running down the line. 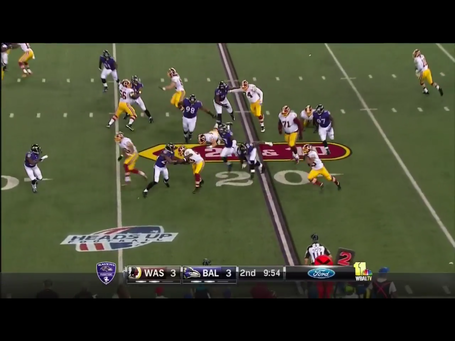 Long eventually loses his balance and falls to the feet of the DT but held him up and pushed him down the field to where he is a non-factor in the play. 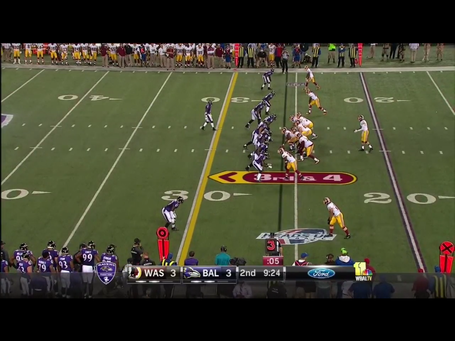 3. Long at RG and is in pass protection. The Ravens are running a stunt on his side. 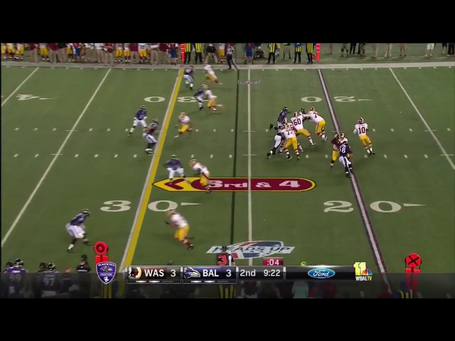 Long does a good job of riding the DL out to Tyler Polumbus. Terrell Suggs is stunting inside. 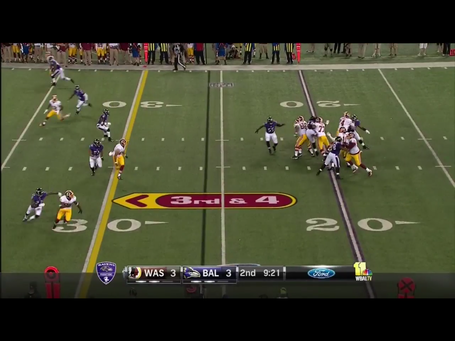 Long picks up Suggs with authority. He pushes him back. From here, Suggs gives up on rush and just tries to read Rg3. 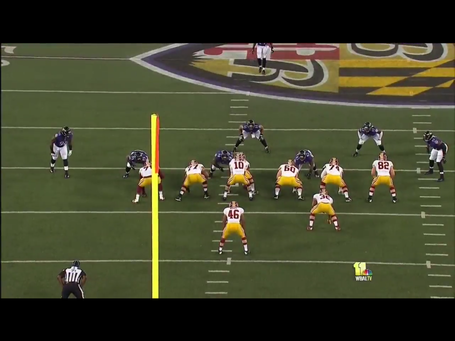 4. Spencer Long is lined up at RG in pass protection again. The Ravens DT is lined up over his outside shoulder. 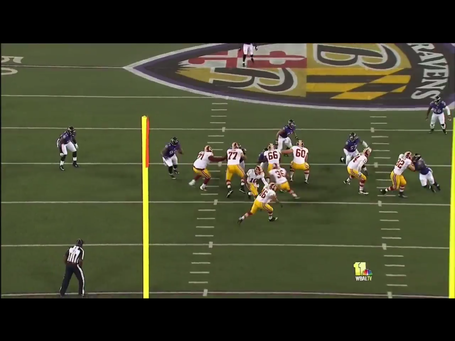 The DT cuts to the inside gap to get Long to turn and open up a gap for the LB to shoot through. 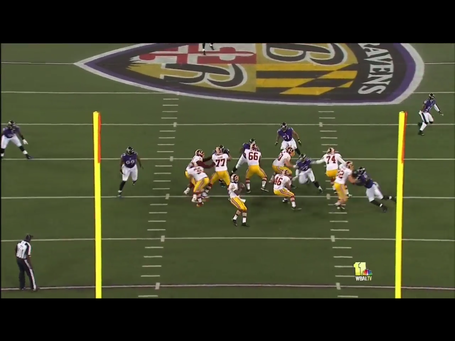 Long keeps an eye on one MLB while the other one comes from his right. Polumbus misses him too. Alfred Morris picks him up but it blows up the play. 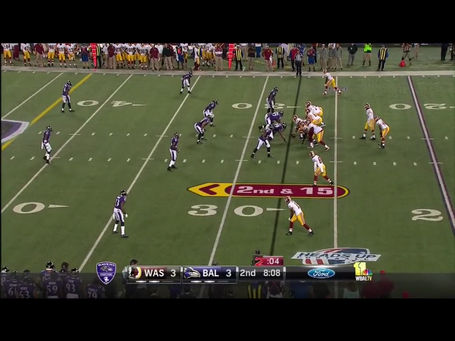 5. Long lined up at RG in pass protection again. This is a quick, 3-step drop from RG3. 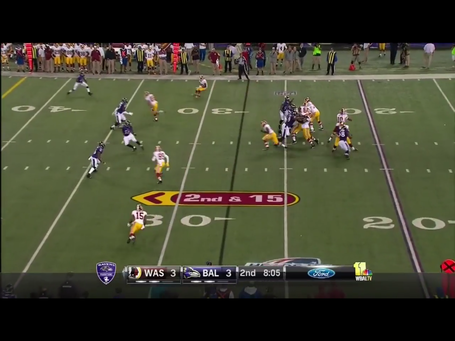 Long stays in front of his man but needs to work on balance and base. He is getting pushed back and this could have been trouble on a longer drop. 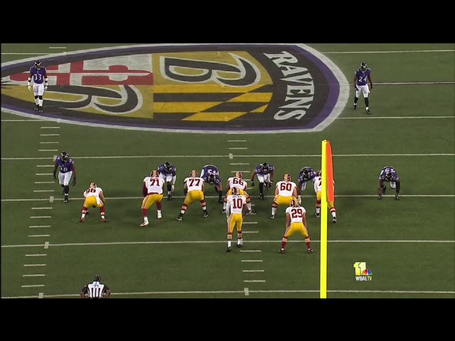 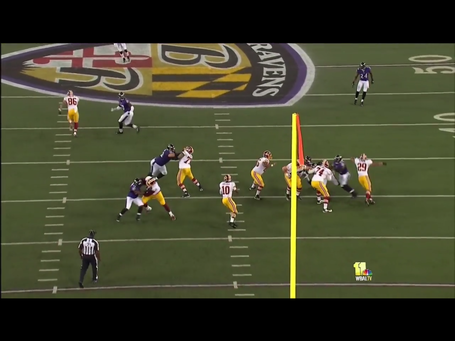 Long opens his hips outside to get a hand on the DL. As he does that, the LB bull rushes, putting both his hands on Long's inside shoulder and pushing. This turns Long completely around. Don't want your RG facing your QB. Again, a balance and base issue. 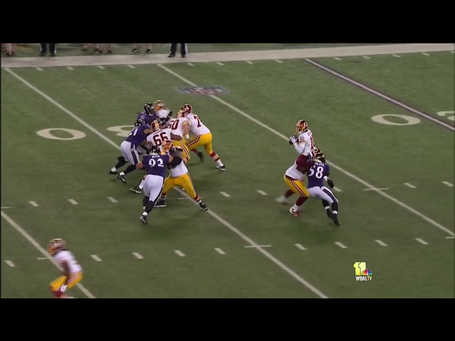 From another angle, O-Lineman can't be turned away from D-Lineman. 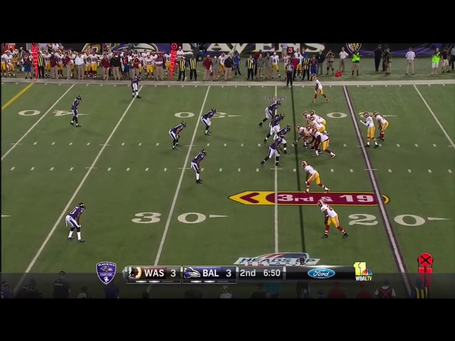 7. The last play on the drive. Long lined up at RG in pass protection again. 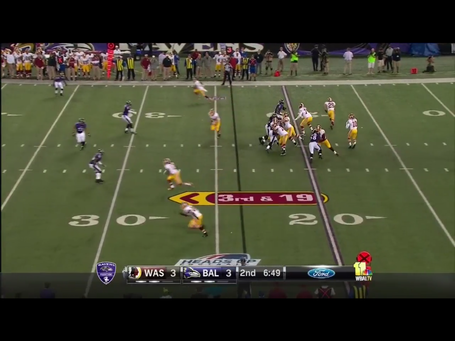 Long does a much better job of getting low and setting his base early. 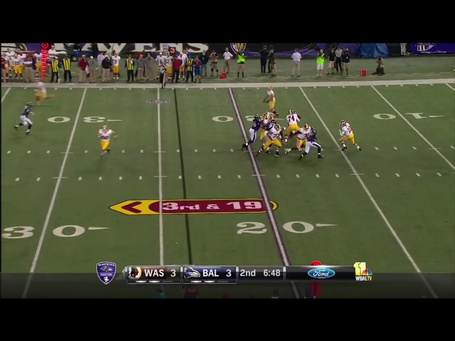 This time, Long keeps his defender the furthest away from the QB.

While Long showed some good attributes in this game, he also showed some weaknesses. The D-lineman in the NFL are much stronger than the players he is used to and he is going to have to adjust to that. He will. Long didn't run away in the RG competition with these reps so Redskins chose to roll with Chester's experience. I believe we will see Long contribute on this O-line at some point this season. The only question is: Will it be from Spencer Long earning the spot or will it be from Chris Chester losing it?