A film look at the Redskins starting defensive front against the Patriots Thursday night.

Much has been made about the Redskins defense this year. Will we improve the pass rush? Is Haslett finally free? Is it 1-gap vs. 2-gap? Will Jason Hatcher be as effective here as he was in Dallas? Is the NASCAR package real? Those are just some of the questions that have been asked about the defensive front. Let's take a look at what they did in their first live game-action in 2014. 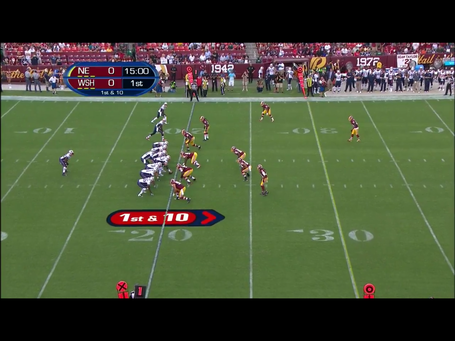 1st and 10. Redskins came out in a Nickel defense. Ryan Kerrigan, Barry Cofield, Jarvis Jenkins and Brian Orakpo are up on the line of scrimmage. Something looks off about this defense though I can't put my finger on it. . . . .OH! I see it now. The Redskins only sent 10 players on to the field. It appears that DeAngelo Hall is the one missing as David Amerson, Bacarri Rambo, Brandon Meriweather, E.J. Biggers, Keenan Robinson and Perry Riley are all on the field. I'm going to assume Ryan Clark asked Hall to take one off as a tribute to Sean Taylor because it's better for my conscience. Either way, the Patriots run to the left. 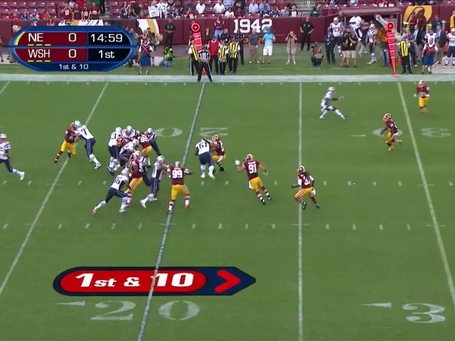 When the hole opens up, Perry Riley and E.J. Biggers (who comes off the slot) fill the hole and Riley makes the tackle. I like seeing Biggers get his nose in the mix as reports out of training camp sound like he is starting to become the lead dog in that slot competition. 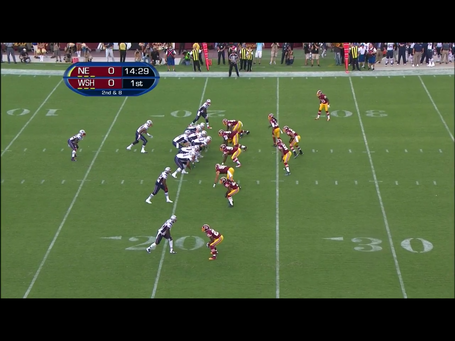 2nd and 8. The same line-up (Kerrigan, Cofield, Jenkins and Orakpo) on the field. The TE motions into the backfield which brings Brandon Meriweather down into the box. 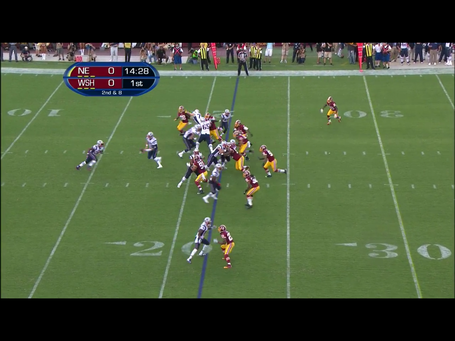 The hole opens on the left side but Keenan Robinson and Brandon Meriweather fill it quickly. 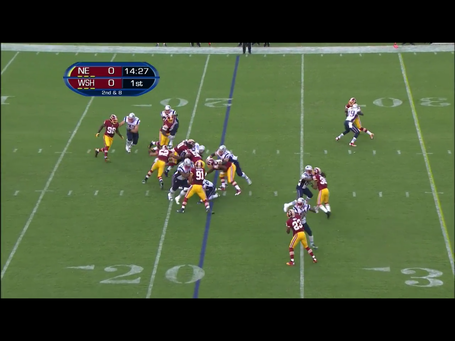 The RB tries to push into his offensive line to fall forward but Meriweather wraps him up and brings him to the ground. 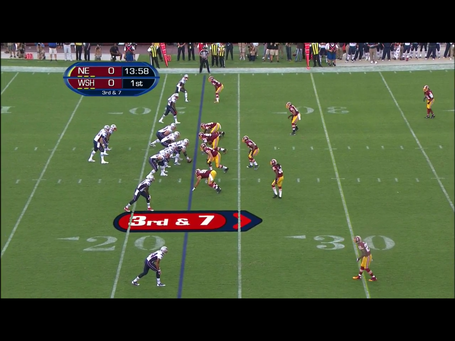 3rd and 7. THE NASCAR PACKAGE! Cofield is subbed off the field creating a Ryan Kerrigan, Trent Murphy, Jarvis Jenkins and Brian Orakpo line-up. When Jason Hatcher is healthy, he will be taking the spot of Jenkins in this personnel group. 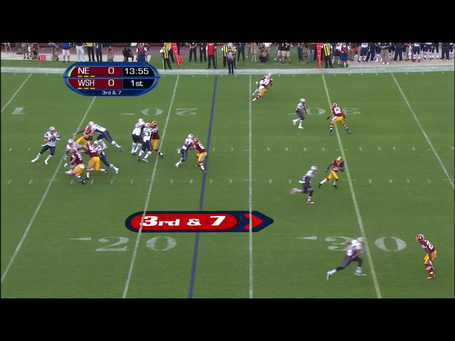 Ryan Kerrigan and Trent Murphy get quick penetration. On the opposite side, Brain Orakpo is drawing a holding penalty. Patriots O-Line is doubling Jarvis Jenkins. Ryan Mallet is forced to move up into the pocket. 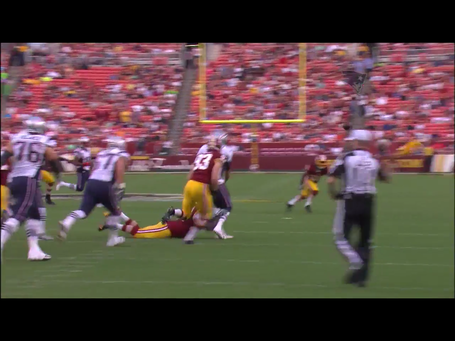 Jarvis Jenkins gets off his double team as Ryan Mallet moves up into the pocket. Jenkins brings him down by his ankles as he completes a pass to his WR. It doesn't matter though as the holding penalty on Orakpo negates the whole play. 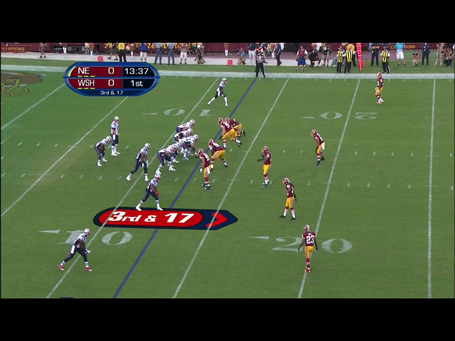 3rd and 17. NASCAR package stays on the field but aligns differently this time. Trent Murphy lines up next to Orakpo on this play when on the previous play he lined up next to Kerrigan. 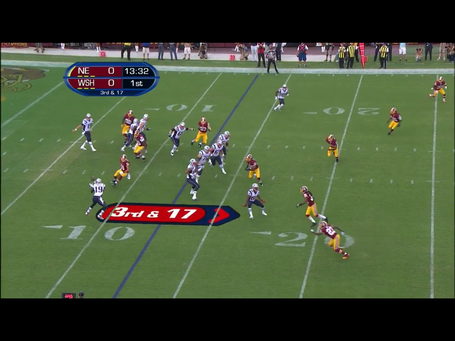 Kerrigan is in mid-season form at this point. He slows down his rush as the Patriots run a WR screen to his side. 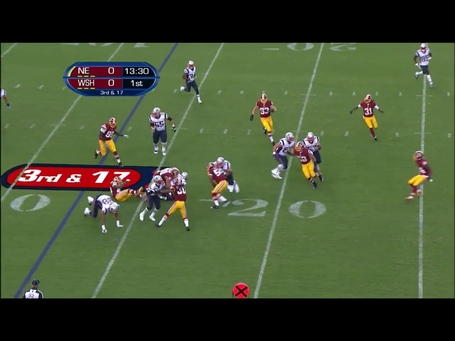 Not only does Kerrigan identify it, but he chases it down from behind for a minimal gain. 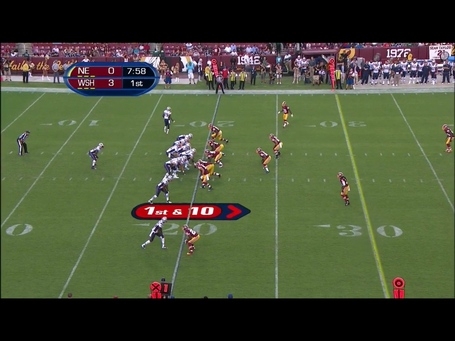 1st and 10. Redskins come out in its base 3-4 defense. Chris Baker, Barry Cofield, and Jarvis Jenkins on the line with Brian Orakpo and Ryan Kerrigan at OLB close to the line. 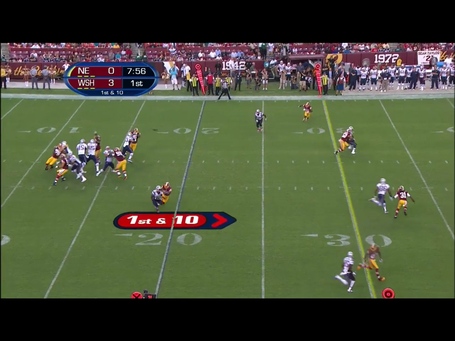 It appears that Brian Orakpo is drawing another hold at the top of the screen. Chris Baker pushes the OG right into Ryan Mallet's lap and his pass on the slant route ends up short because of it. 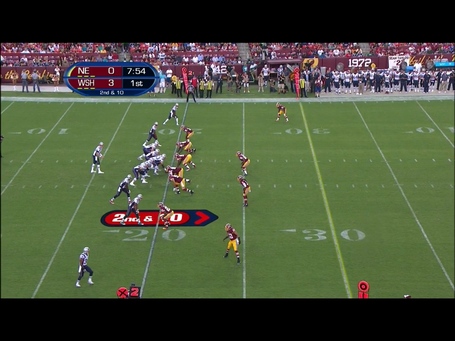 2nd and 10. Same D-line group as the previous play. 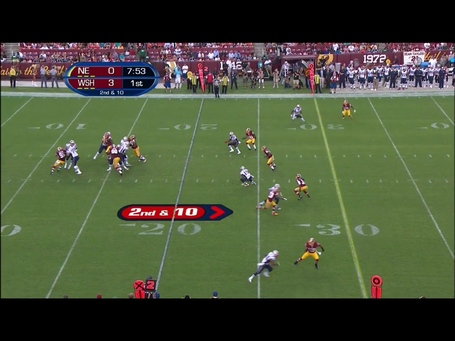 Ryan Kerrigan pushes up-field quick and gets the RT on his heels. At the top, you can see Brian Orakpo beating the LT on an inside move (a big no-no for Olineman). Kerrigan's pressure forces Mallet to step up into the pocket. 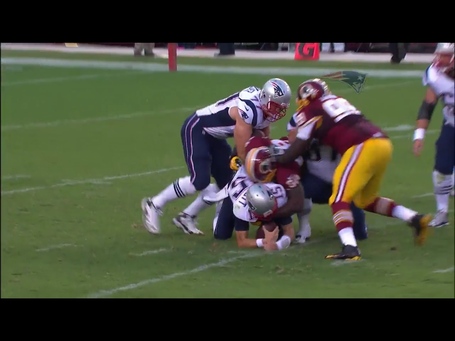 That's where Brian Orakpo is waiting for him and brings him down for the sack. 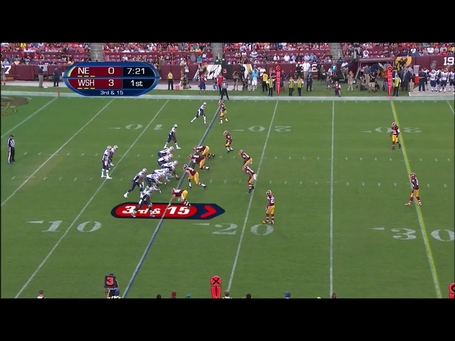 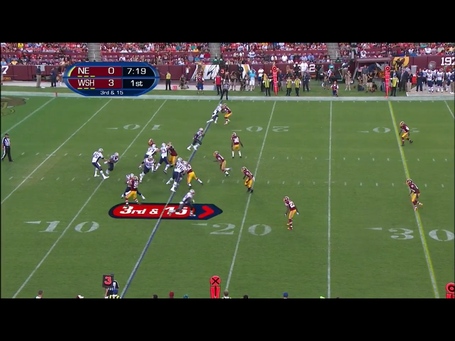 Patriots go with the draw play here. The Patriots O-Line is double-teaming Trent Murphy at the point of attack. 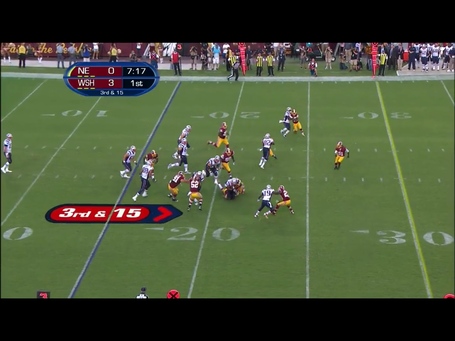 As the RB comes up on the side of the double team, Trent Murphy does a great job of making an outside spin move and grabs ahold of the RB as he passes and brings him down by his ankle.

Yes, it's pre-season but the Redskins defensive front had a very respectable showing in the limited snaps they had. All those practice snaps for Trent Murphy on 1st, 2nd, and 3rd teams were no joke. They are getting him ready for numerous snaps to add to this Redskins pass rush. We will monitor how these guys hold up as they get more snaps through the pre-season and what the addition of Jason Hatcher (when he's healthy) will do for this defense.