One of the more interesting camp battles that no one is talking about.

No, not SS Akeem Davis. The title is not a misprint. I'm talking about the battle between SS Phillip Thomas vs. LB Akeem Jordan. Confused? Let me explain:

With the NFL becoming a passing league, Nickel defense has become more important than ever. In fact, in a division with the Eagles, Cowboys, and Giants, it's highly likely that it's the most prominent defense we use. Anyone else still haunted by our defense's attempt to keep up with the Eagles offense last year? We will need speed and athleticism on the field to improve that effort. That is where the Thomas/Jordan battle comes into play. 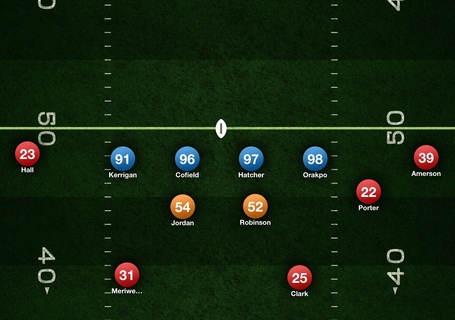 Here is your typical Nickel defense 4 DL (whether Orakpo and Kerrigan are in 3 point or 2 point stances doesn't matter), 2 LB, 3 CB, and 2 S (I will also get to why I have Akeem Jordan here instead of Perry Riley later on). When Akeem Jordan played for the Eagles, he was used a lot in passing situations. His athletic ability allowed him to stay on the field to cover both TEs or RBs while still offering the ability to stop the run if the offense went that route. When Jordan played for the Chiefs however, he wasn't used this way. Why? The Chiefs have a little player named Eric Berry. Heard of him? In obvious passing situations, the Chiefs would put an extra safety on the field and move Eric Berry down into the box to cover TEs and RBs. Enter Phillip Thomas. I'm not calling him Eric Berry or expect him to be Eric Berry but if Thomas can hone his skills this year and stay healthy, he may be able to provide a versatility that we didn't have last year. 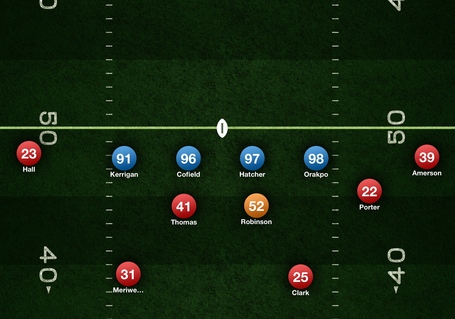 A hybrid Nickel defense. 4 DL, 1 LB 3 CB, and 3 S. The second LB is substituted for an extra safety. In Phillip Thomas's case, not only would this put more speed and athleticism on the field, this would also put a ball hawk on safety valves for the QB who will (hopefully) be facing pressure with the Ryan Kerrigan, Brian Orakpo, Jason Hatcher and Barry Cofield pass rush. Raheem Morris was quoted yesterday saying, "Right now, Thomas is an elite box guy. When he's in the box, he's as good as anyone." While I don't buy that entire cup of Kool-aid, it's nice to see he is able to show off some of those skills that made him a 4th round pick. Phillip Thomas won't beat out Ryan Clark or Brandon Meriweather for a starting spot but in this scenario he can build on his flashes in training camp and play a lot of meaningful downs for us in 2014.

As to why I used Akeem Jordan in this battle instead of Perry Riley, Darryl Sharpton or even Adam Hayward is because in the tape I've watched, Jordan has shown the best in coverage. Some reports out of Redskins Training Camp say that Riley has had better coverage and is ahead of Jordan even in Nickel situations (already knew Riley was ahead in base) so we will keep monitoring that. Regardless of who wins the battle between the LBs, Thomas needs to show enough to keep them off the field in passing situations. He's had a year off and tackling wasn't his strong suit but he's put on some bulk, and flashed in camp. Hopefully, that translates into a growing role within the Washington Redskins defense.

P.S. Don't get me started on the Hybrid amoeba Nickel defense I saw at training camp. . . . . 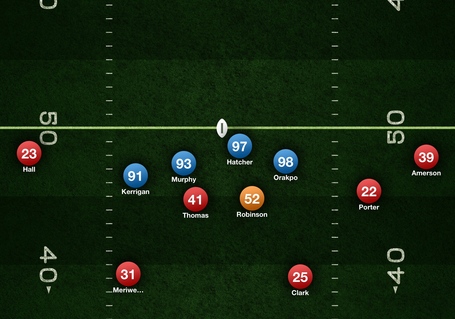 Hatcher in a 3 point stance with Orakpo, Kerrigan, Murphy, Robinson and Thomas all moving around the line until the snap.