Hazard's Huddle: Controlling the Middle Of The Field

A quick film look at Robert Griffin III and the middle of the field.

Share All sharing options for: Hazard's Huddle: Controlling the Middle Of The Field

The pitchforks have certainly been out this week, huh? I won't get into the Redskins "QB controversy" because I file it into the same folder as Santa Claus, the Tooth Fairy, and the Easter Bunny. Robert Griffin III has things he needs to work on. "Leading the league in mental reps" is always a bonus but you need to know what you're looking at in order for those mental reps to pay off. You can get a lot of cheap yards in the middle of the field but we aren't hitting on as many of those plays as we should. Let's take a look: 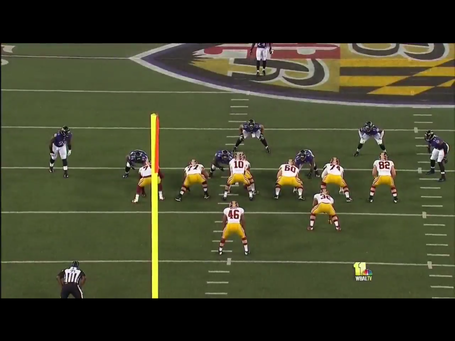 Here's a play-action to Alfred Morris. The play-action is designed to suck up the LBs to the line of scrimmage so Pierre Garcon can run an in-breaking route behind them for an easy gain. 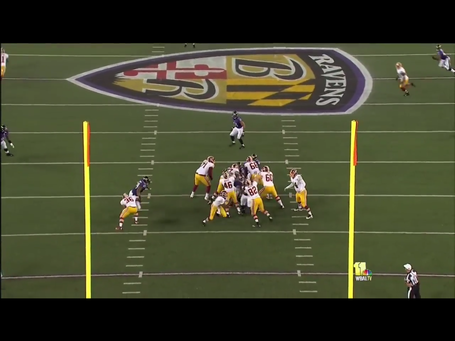 Maybe Rg3 is afraid Alfred Morris isn't going to make this block but this is when you need to stay strong in the pocket. LB came up to the line of scrimmage, realized it was a play-action, is trying to bail, Garcon is coming wide open but Rg3 leaves the pocket too soon. 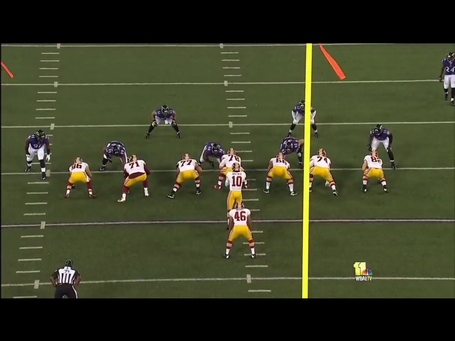 If you've read any of my Jay Gruden breakdowns, you know he loves running high-low concepts. He runs them on the outside and runs them in the middle. This is why Gio Bernard was so dangerous. He'd catch a dump off pass and turn it into a big gain because LBs were concerned with the TEs. Here is 12 personnel. Jordan Reed at TE on the left with Alfred Morris in the backfield (Pistol set). The route combo by Reed and Morris is suppose to put the MLB on an island and choose between covering two different players in a situation where he CAN'T be right. Reed runs a seam route and Morris releases on a short hook route. 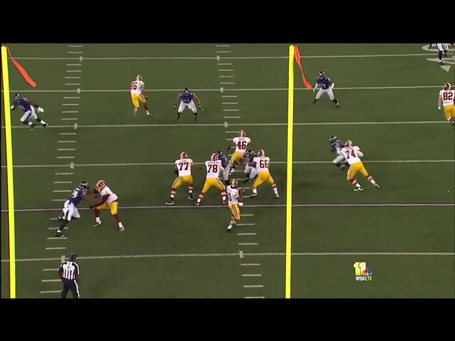 The LB follows Reed up the seam but sees Morris coming out of the backfield. This is the moment of truth. LB has to decide to keep riding the TE up seam or coming down on RB. 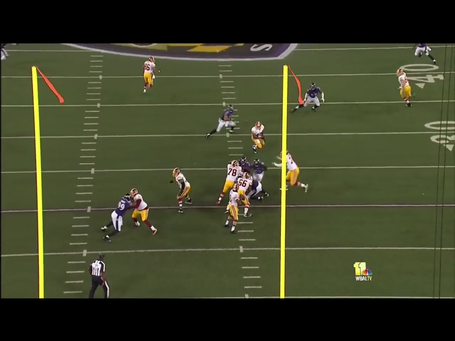 The LB chooses to crash down on Alfred's route. As soon as he makes that decision, ball should be out to Reed. Both Ravens safeties are in this screenshot and Reed has so much room to run. 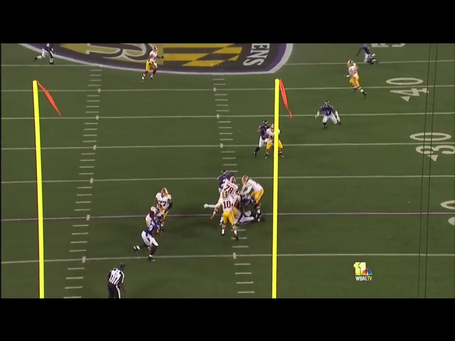 Instead, Griffin dumps if off to Morris who is hit from behind which pops the ball up and it gets intercepted. He's been told he needs to dump the ball off more but there is a time and a place for it. This was not it. Controlling the middle of the field is not a new problem and it's an area Griffin needs to show some growth. He needs to learn to rely on concepts as much as his athletes. It may have cost us a game last year. . . 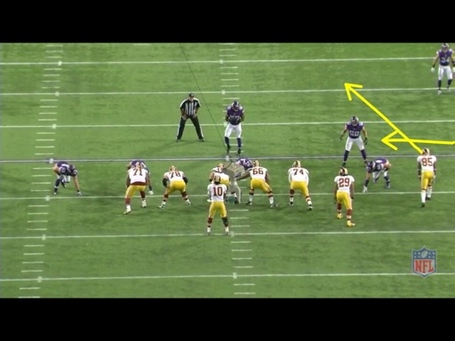 This is last year against the Vikings. There was a short amount of time left and we were driving down the field for a score. Near the end zone, we call a high-low concept to take advantage of the MLB. Leonard Hankerson is running a seam route, while Jordan Reed is coming into the screen with a slant route. 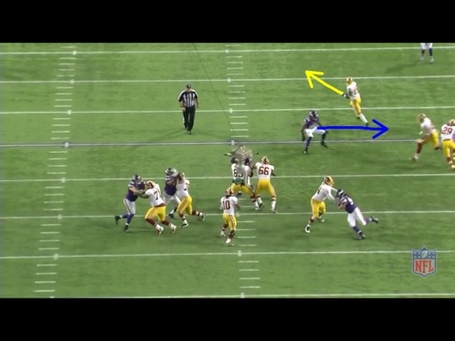 Middle Linebacker shows no hesitation in committing to Reed on the slant route. Hankerson has a free run to the end zone. Griffin should be leading him right into the middle of the field. 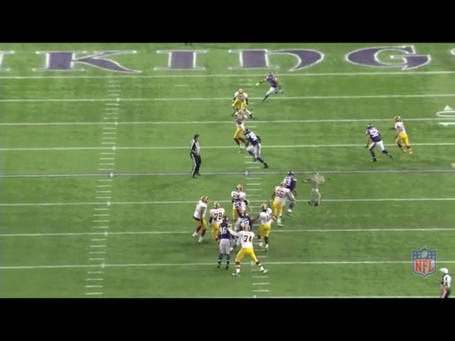 Instead, Griffin just waits for Reed to outrun the LB. This play does result in a 17 yard gain which is good, but we ended up getting bottled up inside the 5, not scoring and losing the game.

Robert Griffin does not need reminders of what he needs to work on. I'm sure he is well aware as is Jay Gruden. The two of them will continue to work together to iron these things out. We should be there to support them along the way.