Alfred Morris will once again be starring in the online fantasy football mockumentary, "Tough Season"  which features a fantasy football league, and one owner in particular who develops relationships with the players on his team.  In the 2nd season, Brad, last season's winner tries to retain his championship.  Alfred Morris is also looking to help win the fantasy championship, and the pizza party that comes with it.

The official press release for the new season:

"It’s great to be back for a second Tough Season with Lenovo," said Indianapolis Colts quarterback Andrew Luck. "All of us players really enjoyed shooting the series, and working with the very funny writers at The Onion. Fans still remind me about my fake championship-game locker room speech from last year! I can’t give away what happens this season…but I can tell you that it involves multiple hula skirts and a pretty sweet music video."

The series premise revolves around perennial fantasy football loser Brad Blevins (actor Tim Baltz) using Lenovo’s Yoga 2 Pro and support from NFL stars to secure his first-ever office fantasy title. In season two, how will Brad handle the defense of his crown: will he let success and his Lenovo spokesman contract go to his head? Can he count on his NFL friends to perform up to championship standards?

The videos will be supported by social engagement from the fictional fantasy owner/coach Brad Blevins, through The Onion and Onion Sports (who together have more than 10 million followers), the players who appear on the series – and three real-life teams, the Colts, Bears and Redskins.

If you missed Season 1, here is the full playlist including some great scenes with Alfred Morris:

The new season premiered today, and there will be a new episode every Friday for the next 12 weeks. Here is the first episode:

And today also marked the world premiere of the music video for the hit song, "Cheeseburger in a Coconut" featuring Alfred Morris, Matt Forte, Andrew Luck, Wes Welker, and other NFL players.

Alfred having a good laugh:

Alfred and Andrew Luck buried in the sand:

Alfred riding a surf board on magma: 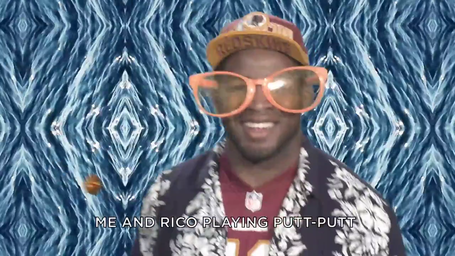