Hazard's Huddle: 3rd Down Back Situation vs. Cleveland Browns

A quick film look at our 3rd down back situation.

Share All sharing options for: Hazard's Huddle: 3rd Down Back Situation vs. Cleveland Browns

Last year, Jay Gruden had tons of success with Gio Bernard. Gruden challenged Bernard in training camp by throwing everything at him and hoping he would soak it all in. Bernard did just that. He started as a 3rd down specialist and his success there led to get getting more snaps on early downs. This year, Gruden drafted Lache Seastrunk in the hopes he could play that same role at some point. While Seastrunk has flashed, he has also struggled and it is clear he is not ready for that role. That leaves holdovers Alfred Morris and Roy Helu battling for the spot. A third down back needs to be able to run, catch, block and execute protections. Morris has made catching a priority to show he can handle the role but that is still a work in progress. Despite Roy Helu's positive grades in pass protection the last two years, reports out of camp have him struggling as well. Let's take a look at what they did in the Browns game: 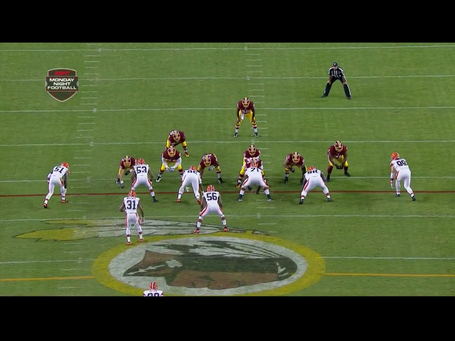 Here is Alfred Morris in a Strong I set. The Redskins are running play-action here. 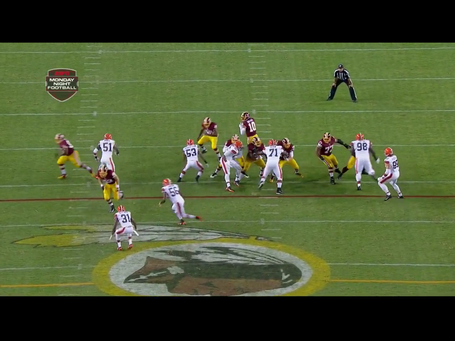 After Morris carries out the play-fake, he has Barkevious Mingo (51) and Craig Robertson (53) running free. You are always taught to pick up the inside guy so Morris focuses on #53. 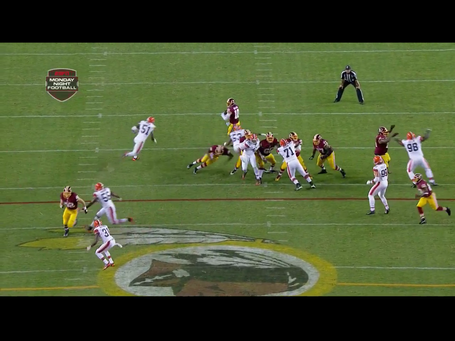 Alfred Morris puts his head down and lunges, missing completely and now Mingo and Robertson have free runs at RG3 forcing a quick throw. 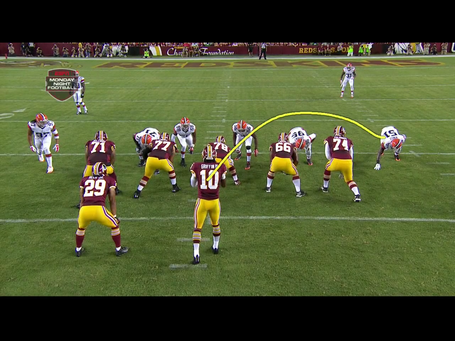 Barkevious Mingo is running a stunt from outside to inside on this play. Helu comes up on a middle protection. 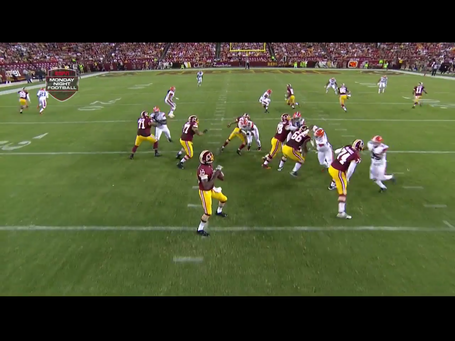 Helu also drops his head when throwing a shoulder and misses Mingo completely. 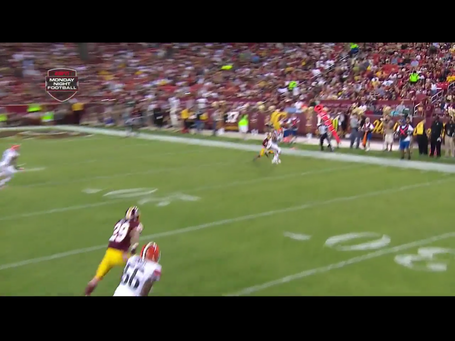 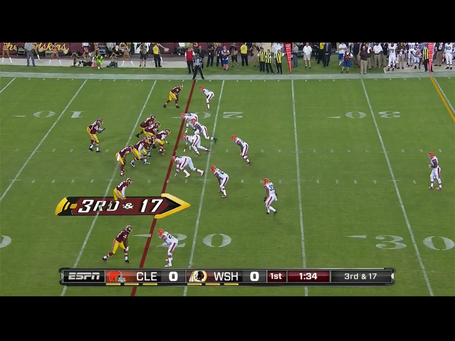 Here is Roy Helu in shotgun with Robert Griffin III. 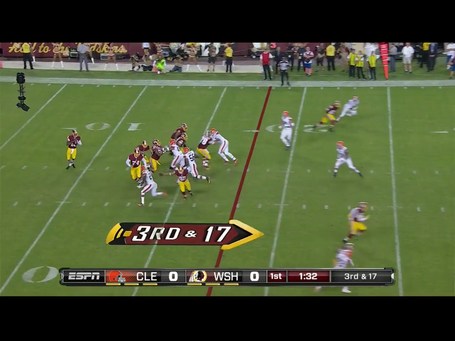 After the snap, Helu starts sliding to the right of the formation to pick up any extra rushers. 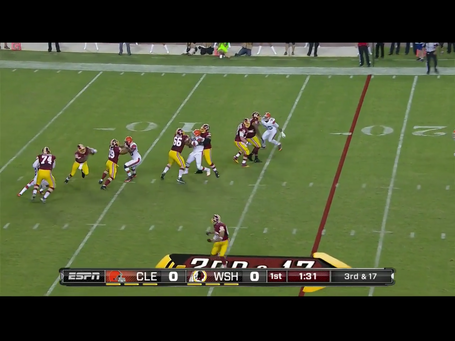 Helu is late across the formation though so when he meets the rushing LB he isn't able to set a base and gets thrown backwards into RG3's lap (Tyler Polumbus isn't helping here either). The play ends in a scramble. 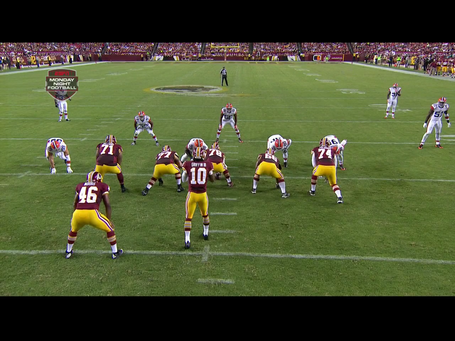 Here is Alfred Morris next to Robert Griffin III in shotgun. 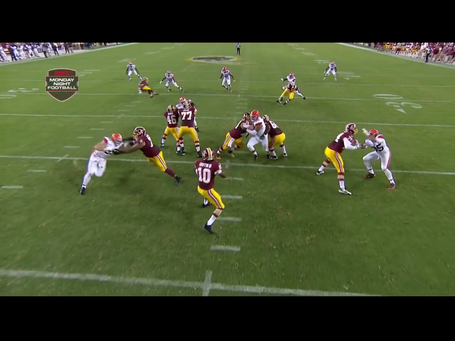 Morris goes up and helps Shawn Lauvao block, who already had his guy well handled while Chris Chester and Kory Lichtensteiger are being split on the other side. 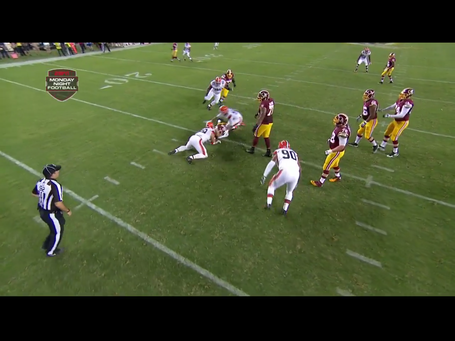 The play ends in a sack. Not faulting Morris for this one obviously. 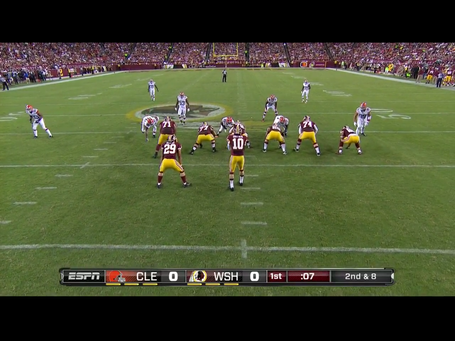 Here is Helu next to Griffin in shotgun again. 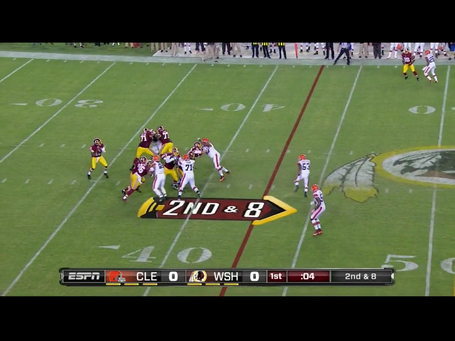 This time Helu gets across the formation quickly and helps Jordan Reed block the DE and gives RG3 time to hit Andre Roberts on the deep bomb to end the first quarter. 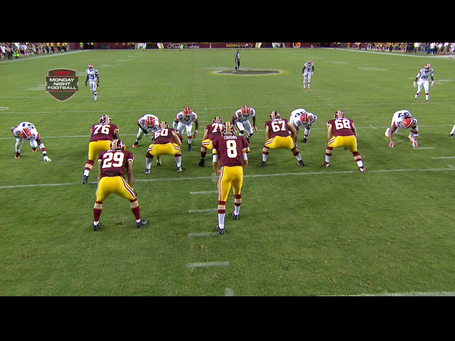 Here is Helu next to Kirk Cousins in shotgun. 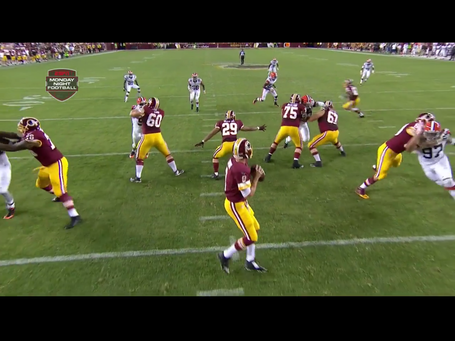 Helu does a good job this time getting to his middle protection assignment quicker but there are no extra blockers so no telling how he would have done. At least he has a solid base this time.

The truth is, Evan Royster, who has been written off everyone's roster predictions (just like last year), looked better than both Morris and Helu which can't please Jay Gruden. If things don't improve, Darrel Young might have to be the Redskins 3rd down back.