A quick film look at the Redskins four failed goal line tries vs. the Cleveland Browns.

Pride is ending a 16 play drive w/ a 4 down defensive stop. IN THE PRESEASON! #DawgPound

^ This guy is pumped about it.

Last year, the Redskins were not very good in the red zone. The fact of the matter is, the zone running scheme that helped the Redskins get all over the place between the 20's bottles up when the field in shrunk. Athletic Olineman don't have enough room to run and the cutback lanes disappear. At some point, football has got to be about lining up against the guy in front of you and beating him and the Redskins didn't do that. Mike Shanahan, a man not known for his honesty, even went as far to say that he looked at some of the things Jay Gruden was doing in the red zone to be so successful. While Jay Gruden is still going to run the zone scheme and play to the Redskins strengths, he is also bringing over the power run game that he used a lot in Cincinnati. Monday night, the Redskins got inside the 5 yard line and on four tries they failed to make it into the end zone. Let's see what happened: 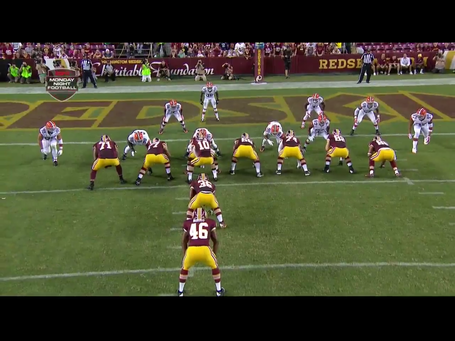 1st and Goal. 22 personnel (Two RBs, Two TEs). The Redskins are running Power Right. The right side of the line is suppose to block down while Shawn Lauvao pulls right and Darrel Young also leads out to the right. 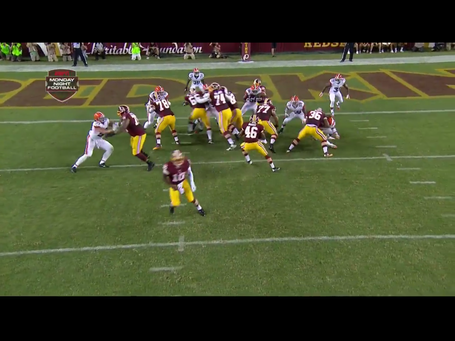 Logan Paulsen goes across and blocks down on a DT and Jordan Reed blocks down on 2nd level as he should be takes a bad angle on the LB (he's behind him in the hole). Young and Lauvao lock up their blocks so if Reed made his block correctly, it would leave Morris vs. Donte Whitner 1 on 1. 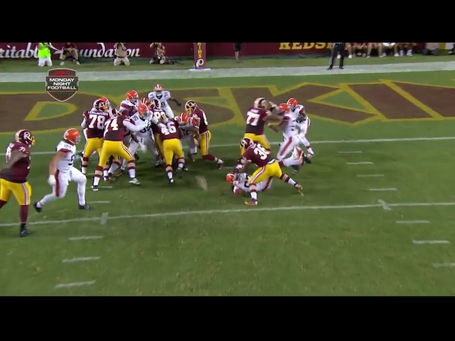 Instead, Morris runs right into the LB that Reed is standing behind. Browns rally around the tackle and stop his momentum. 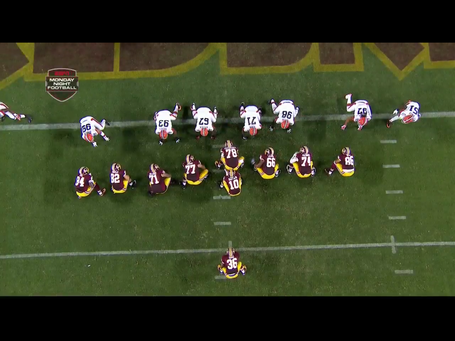 2nd and Goal. 23 personnel now. This time the Redskins run a Power Left. That means the left side of the line is blocking down with Chris Chester pulling left and D.Young leading up the left side. 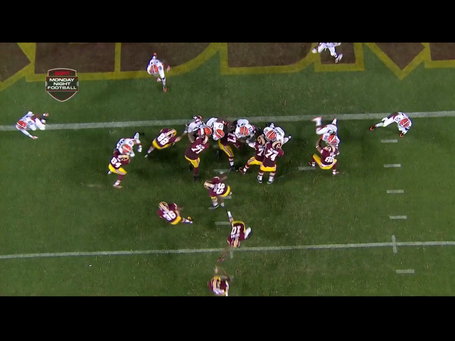 On the previous play, Jordan Reed went to the second level to block a LB. On this play, Niles Paul has the DE. Why? The DE crosses Paul's face. No one crossed Reed's face so he had a free release to the second level. Paul seals the DE inside, leaving Young and Chester to block the only two guys left on the outside. An ideal 2 on 2 situation. 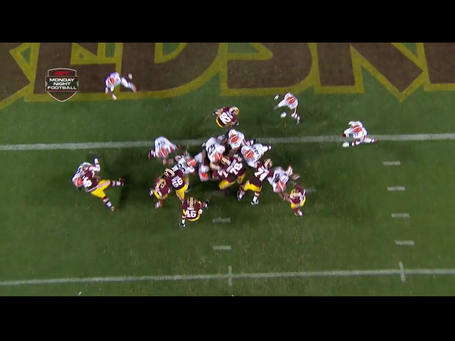 Unfortunately, Chester doesn't go outside and instead blocks the guy that Paul already sealed inside. 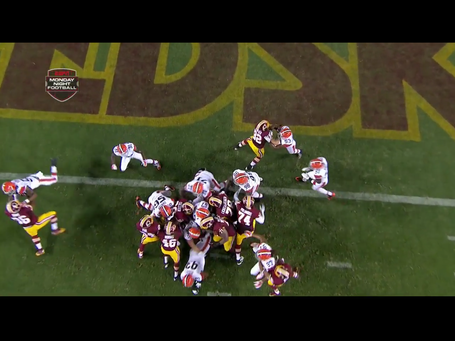 Morris now gets caught up on that pile and the free defender is able to come up and stop him from crossing the goal line. 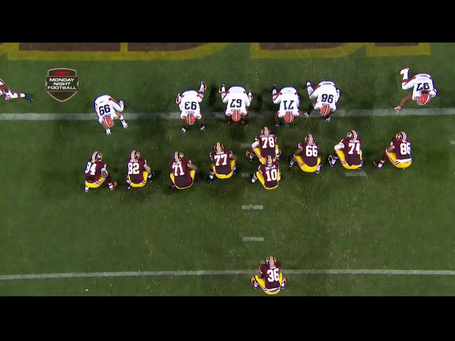 "RUN IT AGAIN!" Jon Gruden yelled in the booth. 3rd and goal. The exact same play as the previous one. Power left with 23 personnel. Chris Chester pulling again. 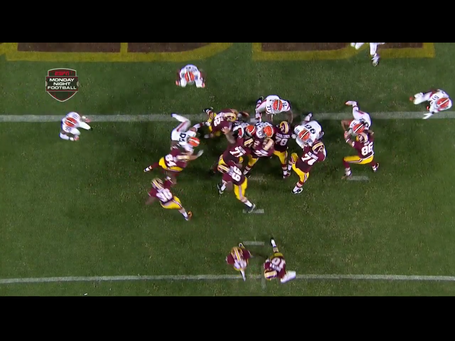 Again, Niles Paul has the DE cross his face and again he seals him inside with Chester pulling around and Young coming up for the kick-out block. 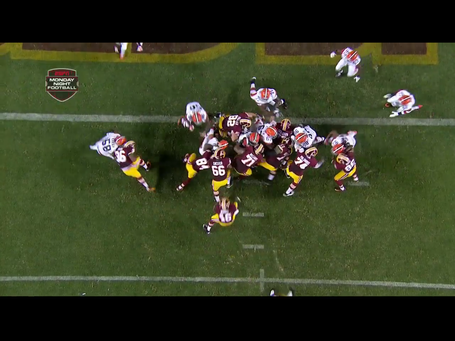 Again, Chris Chester blocks the man Paul already has taken out of the play. That leaves a LB free in the hole and then Alfred Morris tries to jump over Chester. . . .which fails miserably and the Redskins are stopped again. 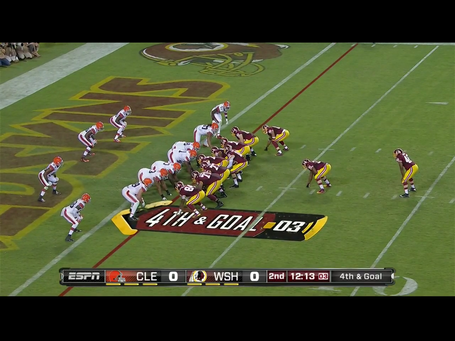 4th and Goal. Power didn't work? Let's try the outside zone left (the weak side) which didn't work last year. 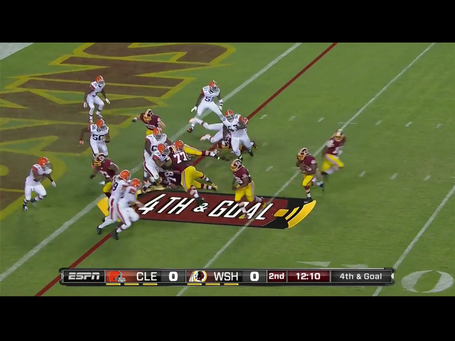 Logan Paulsen releases to the 2nd level from the right side to take block a LB (his assignment). But as you can see, Paulsen is already 5 steps behind the LB he is suppose to block. The confined space really takes a toll on some of these blocking angles. Shortly after this screen shot, Paulsen also gets stripped up. 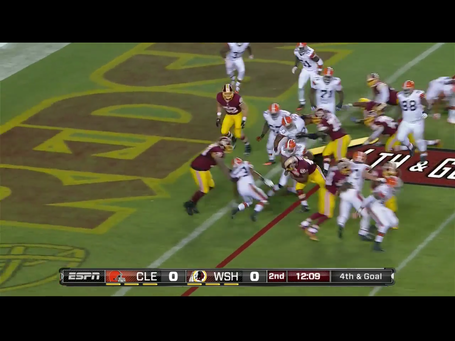 The LB who Paulsen was chasing is now free to meet Morris in the hole and a few other Browns join the pile. The play is originally ruled a touchdown but gets called back after replay review. Turnover on downs.

I think it's safe to say that the zone stretch is still not going to have a high success rate inside the 5 and the installation of the power is still a work in progress. This is just simple assignment football here and will be a good teaching tool in the film room for Jay Gruden and the offense.