Comparing the differences between the current Redskins depth chart and my current projected 53-man roster.

You can find the current Redskins depth chart here. 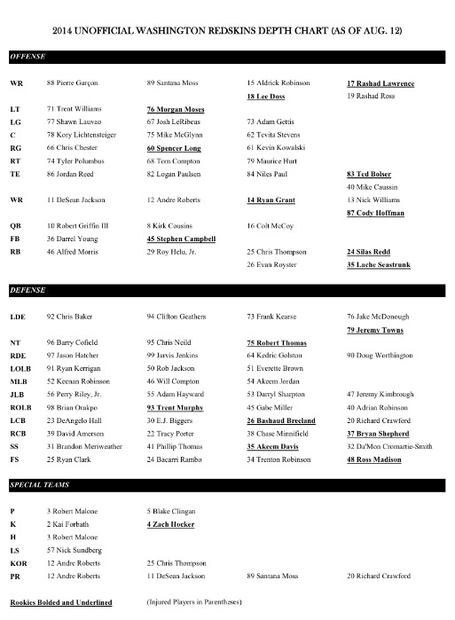 With camp wrapping up and the first preseason game behind us, who stays and who goes?

There are some differences in my projected 53-man roster and the current Redskins depth chart.  Let's take a look.

The only difference on offense comes at the RB/FB positions.  We both agree that Morris and Helu are the top two RB's while DY is the top FB.  Where we don't agree is who comes after Morris and Helu.  I went with Seastrunk at this time based on Thompson's inability to stay healthy and Seastrunk's impressive performance against the Pats.  The Redskins list Chris Thompson as the third RB.  Seastrunk is listed third of the "Others" behind Silas Redd and Evan Royster.

This is interesting.  The depth chart and I agree that Hatcher, Cofield, and Baker are clearly the starters.  What's interesting is that the depth chart lists Geathers, Nield, and Jenkins as the second unit with Frank Kearse, Robert Thomas, and Kedric Golston as the third-string.  Bowen isn't listed at all as he's still currently on PUP.  I went with Golston over Geathers and Nield and think the RDE or LDE designations are pretty irrelevant.  Golston is listed as the third-string RDE but I'm confident he could play on either side of the DL.

Another slight interesting disagreement here.  We both agree that Riley and Robinson are locked-in as starters.  The Redskins list Adam Hayward and Will Compton as their primary back-ups followed by Akeem Jordan and Darryl Sharpton as the third-stringers.  My prediction includes Sharpton and Hayward as primary back-ups with Akeem Jordan being the fifth guy.  Am I overlooking Will Compton?

The Redskins list Bacarri Rambo as the back-up FS with Trenton Robinson being the third-stringer there.  I went with Robinson over Rambo based primarily on ST's ability.  It's also interesting that the depth chart has to designate FS and SS though they're largely interchangeable on our team and most of the safeties listed can play either.

The Redskins still list Kai Forbath as the first-team K whereas I think Hocker is clearly ahead at this point.  What do y'all think?  Hocker looked great in the preseason game against the Pats and Forbath was very underwhelming.  I don't think it's as close as others do at this point.