The final write-up of the Redskins Recon series look at the St. Louis Rams who the Redskins will face in week 14 of the 2014 season. These two teams will be forever tied at the hip by the trade that brought RGIII to Washington, and until he leaves the league pundits will compare the two to evaluate who got the better end of the deal in 2012. With the previous game in St. Louis in 2012 ending in defeat for the Redskins, what can they expect in 2014?

Well let's get that elephant out of the room nice and quickly. In order to get the Rams #2 overall pick in the 2012 draft(to select Robert Griffin III), the Redskins gave up their 6th overall pick and 2nd round pick in 2012, they also traded their first rounds picks in the next two drafts.  You want to know what the Rams did with that bounty of draft picks?  Well here you go (courtesy of Mr Hazard via Twitter)... 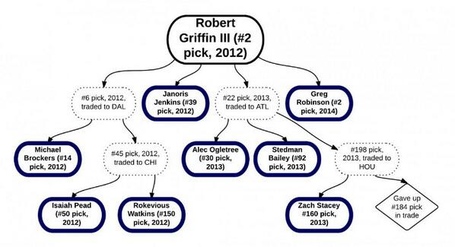 So the Rams turned one player into eight.

I will leave the necessary debate to you guys in the comments section.  Needless to say, due to this trade in 2012, the Rams have been able to go on and improve their roster significantly over the last couple of years, to the point where they are on many people's radar for a breakout performance this year.  Over the last decade the Rams have struggled and haven't even recorded a winning season since 2003, but last year they managed to fight their way to 7-9 and now the onus is on these young players to make an impact sooner rather than later and return the franchise to it's turn of the millennium dominance.

In terms of the coaching staff, the Rams have kept Jeff Fisher for another year, but made a change on the defensive side of the ball that may make Redskins fans envious.  Gregg Williams will step in to take control of a defense that is loaded with talent.  Of course we all know Williams well from his time in Washington, but if you would like a recap of what Williams brings to a defense I recommend you read this by former Redskin Matt Bowen.

The Williams' scheme is based out of a 4-3 front, but to pull out something specific I thought these quotes sum it up well.

The Insider's Guide to a Gregg Williams Defense

Find out what Gregg Williams' defenses do so well in advance of our reunion in week 14 vs Rams.

The Insider's Guide to a Gregg Williams Defense

Williams' scheme is complex. Multiple fronts, coverages, pressures, personnel packages, etc. There was a lot going on there. A defense that went deeper than anything I had experienced as a player.

But at the core of any Williams game plan is pressure. It can be exotic with the disguise, or he will have his guys line up in a blitz look and dare the offense to stop it. If he could, Williams would blitz fans out of the stands.

On the offensive side of the ball we have Brian Schottenheimer who finds himself under pressure this year to deliver results in what will be his third year with the team.  This article goes into more depth about this pressure on Schotty, and the most useful quote to explain what the Redskins can expect is as follows:

In an NFC West teeming with some of the league's most creative offensive minds, Schottenheimer stands out as an anomaly: A rigid disciple of the West Coast attack stuck in an era when coaches such as Philladelphia's Chip Kelly and San Francisco's Jim Harbaugh are pushing the envelope weekly.

(Editor's note: NFC West and creative offensive minds... not sure about that? Defensive maybe)

In terms of the playing staff, the most obvious talking point is the approaching crossroad that Sam Bradford finds himself staring down. The former first overall pick in the 2010 draft has never quite lived up to his reputation.  Up until the last couple of years he would have had an easy counter argument to make - that he was not protected and had no weapons.  As he walks around training camp this summer he must realise that these arguments can no longer be made, and it couldn't have come at a worse time for him. Recovering from an ACL injury suffered last year is difficult enough, but he also must be keenly aware that this is the last year on his rookie contract. At this stage it is anyone's guess what the Rams front office would like to do with their quarterback, but I am sure they are not 100% happy with their return on investment to date. I suppose they also have to consider if their window for drafting a franchise QB is closing rapidly if they don't stick with Bradford.  Could that hamstring them for years to come?

In free agency the Rams made a couple of small splashes, but naturally with their mountain of draft picks they didn't need to go into the market unless necessary.

Then came the draft. SB Nation gave them a B+ and summed up their draft as follows:

The Rams' first two days of the draft were almost perfect. Greg Robinson and Aaron Donald add tenacity, physicality and explosive power to the trenches on each side and both embody the culture that pervades the NFC West. Joyner is a nice need pick with the departure of Cortland Finnegan, and gives them more flexibility. Tre Mason feels like a luxury pick -- the Rams already have a solid backfield as it is -- but it's an enticing addition and adds some explosive speed to their offense.

I guess the difficulty for Fisher and his coaching staff is wading through all this talent and putting together a winning scheme and a final 53-man roster that can deliver results. You have to question if the youth and experience factor will play a part, as will getting this team to gel quickly, but I am picking at straws here.  If these payers can match their potential the Rams will be a worthy foe in 2014, particularly on defense. Their offense looks like it will have more playmakers but still may suffer from predictable and rigid play calling.  The Redskins may have an edge by playing at home, but this will be a tough game.

Since we have discussed the QB already we can look at some other key players. This roster is loaded with talent, but here are just a few to keep an eye on during the game.

Moved from tackle to guard recently, and performed at a very high standard

Rookie season last year saw him take a bit of time to adjust but by the end of the season he ended up being rated as the 2nd best run blocker and 7th best pass blocker out of the league's tackles. Recovering from a torn ACL.

One of the best pass rushers in the league. Was limited a bit by injury last year, but averaged over 11 sacks a season for previous 3 campaigns.

Finished 7th in the league in his rookie season in terms of rushing yards.

Under Gregg Williams this huge linebacker could flourish.  Had a great rookie season last year and many are predicting great things for him in 2014.

Keys to the game

The Redskins need to play well defensively here to minimise the Rams offense and keep them in the game.  Whilst our offense looks strong we will need to be on the top of our game against this talent filled, Gregg Williams led defense that will cause many teams problems in 2014. In terms of attacking that defense, the secondary is probably the weakest area, so we will be looking to the passing game and our wide receivers to create quick separation for RGIII to unload quickly and accurately - before any Rams pass rush gets home. The screen game may come into play heavily in this game. Although Bradford is not yet considered a top QB, he will have better protection and if our pass rush can not get to him then he has more than enough talent to pick apart our secondary.

Since the last few games are divisional we have finally covered all of our 2014 regular season opponents, and that brings us to the end of this Redskins Recon series. I have really enjoyed writing these articles and appreciate all the comments and feedback (even from some of the Eagles fans!). It has given me a great perspective on this season, and deeper insight into each opponent and I hope it has helped you in one way or another. You can expect the usual articles during the season as we build up for each game week by taking a look at some of the key players and story lines surrounding each opponent.

The St. Louis Rams Shut Out the Washington Redskins 24-0