Three Candidates for Replacing the "Redskins" Nickname (OR: Why "Warriors" Stinks)

Without rehashing the argument itself, Tom breaks down the criteria for a good new nickname and evaluates several possible options in the event that Dan Snyder and the Redskins decide to make a switch.

Share All sharing options for: Three Candidates for Replacing the "Redskins" Nickname (OR: Why "Warriors" Stinks)

I recently awoke from my off-season aestivation and was simply stunned to discover that the whole "nickname" thing has not, in fact, died.

I don't want to rehash the debate here.  We all need a break from the argument, right?  The continuous desecration of what's left of this particular horse's corpse has fatigued even me.

My thoughts on the name and the bigger-picture controversies that emanate from it have been documented extensively, including here, here, here, and, most recently, here.  Our own Ken Meringolo wrote what I thought was a balanced and very astute piece on the topic recently.

Instead of weighing the merits yet again, I'm going to offer three alternative names that I like quite a bit---if the Redskins eventually decide to change their name.

I'll begin with a few points that help form criteria for what constitutes a "good" name.  I'll also explain why I believe "Warriors" would be a bad choice. 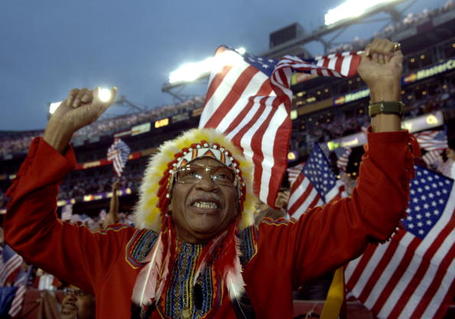 1. All Native American imagery must go. My apologies.  Let me explain.  A lot of people will hate this, I know, but a lot of people already don't much like the idea of dumping the current nickname.

There have been several compromise suggestions that involve tweaking "Redskins" but keeping everything else.  Here's the problem: If one of the primary reasons for changing the name is to get incessant commentators and organizations to end their campaigns against the team, then a "compromise" name is a non-starter.

For every Bob Costas who would be put at ease with a switch to, say, "Warriors," there would be a Dave Zirin or Keith Olbermann who would still decry any "mascotting" of Native Americans.  Just a couple of weeks ago, activists announced that their next target will be the Kansas City Chiefs, whose nickname is seen as more innocuous than "Redskins."

That's one reason why changing the name to "Warriors" would be a mistake.  "Warriors" will stave off pressure temporarily as much of the anti-"Redskins" crowd is satiated, but some of the louder voices will continue to criticize the franchise if it uses any kind of Native American imagery.  Within 48 hours, "Warriors" would bring a flood of harsh columns from some of the same outlets that stopped using "Redskins" last season.  Just a couple of years after changing to "Washington Warriors," we would probably be back to square one.

For those who think that this is a silly concern, recall Marquette University.  And that was all the way back in 1993.

A half-measure will tick off both die-hard fans and die-hard activists.  If the name goes, it should all go.  Remove everything.  I don't want to see so much as a feather. 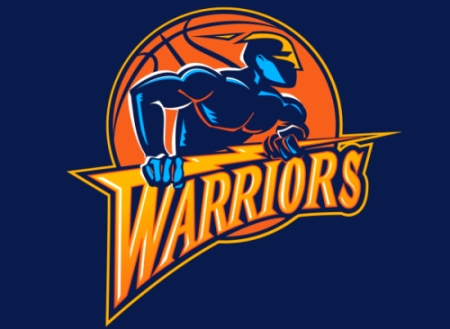 2. Don't use names that already exist. Another problem I have with "Warriors" is much more straightforward: There's already a major professional sports team with that name, the NBA's Golden State Warriors (whose original logo was this, by the way).  That same-name element bugs me, as would "Redhawks."  There is also already a team in the NFL with a name in the form of "____hawks," as well as a D-I school that uses that exact name (after once being known as the "Redskins" themselves).  And that's to say nothing of the Atlanta Hawks.

I've actually read a few suggestions that the Redskins should revert back to the "Braves" nickname.  That's a problem both because of #1 above and because of the Atlanta Braves.  The Atlanta Braves, of course, were originally the Boston Braves, from whom the Redskins took (stole) their original nickname at a time when pro baseball was many times more popular than pro football.

The point is that Washington should resist the temptation to take a name that's in use elsewhere in major professional or college sports in the United States. 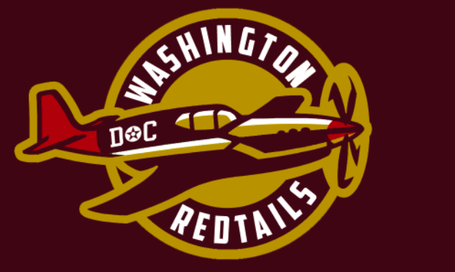 3. Don't use a bad name for the sake of clinging desperately to "red" or "skins." I'll just come out and say it: "Pigskins" is lame.  If you don't think it's lame, it's probably because you want to hang on to "skins." I understand that impulse-but it doesn't change the fact that you're naming the team the Washington Footballs.

The same goes for names like "Red Tails," referencing the Tuskeegee Airmen (and an underwhelming, CGI-addled George Lucas movie).  While that might be a reasonably cool nickname if the franchise were located in Alabama, the connection isn't tight enough for a DC-based team.

5. Ideally, the name should "work" with the fight song. The lyrics would have to change at least a little with a new nickname, but the key is: two syllables.  This isn't mandatory, but it would be a nice bonus.  If the new name isn't "compatible" with "Hail to the Redskins," fans will just sing the old song, anyway, which will trigger round after round of tsk-tsking from the usual self-congratulatory media voices who will leap at the opportunity to insult the team's "racist" fanbase.

I should pause here to bring up another point: Make no mistake, even a nickname change won't end this crusade entirely.  Prominent, snarky columnists and bloggers will write post-name-change articles with titles like "Racial Slur Appears 29 Times in Washington Media Guide."

That brings me back to the fight song.  Being able to use the new name with the old fight song will not only preserve what is objectively one of the better traditions in the NFL, but it will also mitigate the inevitable chorus of "Should the NFL penalize Washington for its fans' racist song?"-style hot takes.

6. Also a bonus: Picking a name that sticks in the craw of the anti-"Redskins" folks. I'm not referring here to Native Americans who oppose the name.  Naturally, I'm talking about sportswriters.

Yes, it's petty, and that's usually not my style.  And, as I said, it's not essential.  But it would be a nice little perk if some of the same condescending media members who have peered down their noses at Redskins fans for the past couple of years got those same noses out-of-joint over a new, bulletproof nickname.

The Washington Times recently suggested changing the team name to the "Reagans" primarily for this reason.  While the idea predictably triggered a critical response by left-leaning outlets, "Reagans" is wayyyy too heavy-handed.  If taunting anti-"Redskins" blowhards is one of the small goals, the attempt needs to be something more subtle and less divisive.

Here are three new name options I like.  None are flawless, but I could be happy with any of them if a change does occur. 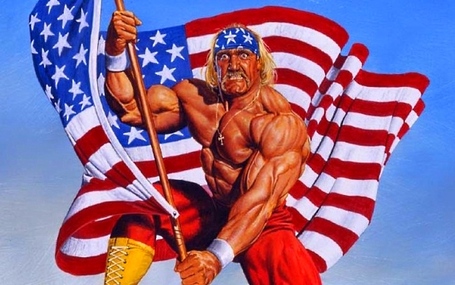 Upside: This is one that's been tossed around quite a bit, largely because it would allow the continuation of the use of Native imagery.  For the reason I explained in #1, my version would go in a totally different direction.  Red, white, and blue color scheme.  A uniform that resembles something like this, but without the grey, and definitely without the blood.  But the flag theme is a good one.  Oh, you have a star, Dallas?  Awesome.  We have fifty of them. Have Hulk Hogan lead the team out of the tunnel for the first season home opener.  There's also some nice symmetry with the Nationals.

Downside: Several problems.  The name doesn't work with "Hail to the Redskins" unless you want to butcher the pronunciation of "Americans."  And I don't.  Moreover, there's already a small-time women's professional hockey team with this name, although I'm guessing they would be amenable to selling their IP to Dan Snyder for a small sum.  But there's a bigger problem: The mascot.  The natural totem for such a team would have to be a bald eagle.

Verdict: The mascot thing, in and of itself, could be a deal-breaker.  We could always go with Uncle Sam instead, I suppose.  I love the red, white, and blue motif, and everyone from gun-toting Tea-Partiers to progressive hipsters would be up for bearing those colors.  However, this one might have too many small defects to be viable.  Let's look at another option . . . 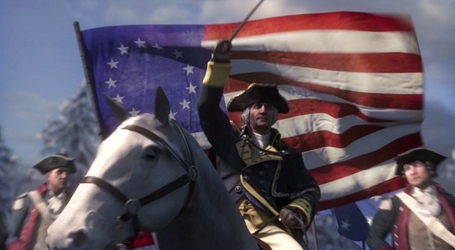 Upside: The song works fairly well, although a few lyrics would need some modifications.  The name has a strong connection to Washington as our nation's capital.  We could also use a red, white, and blue scheme, or the team could keep the old colors.  The new mascot would be terrific, with a jacked-up version of our first (and perhaps greatest!) president, George Washington, serving that role.  There are no IP issues to speak of, at least until someone with way too much time and money on his hands reads this article.  What's more, the use of "Founders" and George Washington will chafe some of the more outspoken "Redskins" critics who aren't big fans of the history of the United States.

Downside: The fact that "Founder" rhymes with "flounder" will make for a ton of hack-y headlines.  There's also a slight historical problem.  When the actual Founding Fathers were at the height of their powers, the city of Washington hadn't even become the capital yet.  That didn't happen until 1800, and Washington was basically just a swamp before the 1790s.  Prior to Washington assuming the mantle, Philadelphia had been the temporary capital of the United States, and, before that, the meeting place of both the First and Second Continental Congresses.  So, we're back to the Philly problem again.

Verdict: I like this one quite a bit, but it still has issues.  It's likely a better choice than "Americans" overall, but fewer people would immediately embrace the name.  On the other hand, I would enjoy fellow Virginian and American hero George Washington as the new mascot and symbol of the franchise. 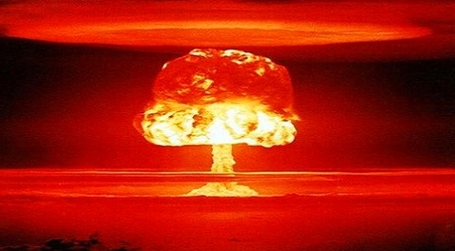 Upside: When the nickname controversy started gaining steam back in 2012, this was the first thing I suggested when I was coming up with viable alternatives.  Washington is the home of the Pentagon and the Commander-in-Chief.  The military connection is obvious.  "Warheads" meshes almost perfectly with the fight song.  In fact, I think you could change "Redskins" to "Warheads" and "Braves" to "Nukes" and call it a day.  The merchandise would be excellent.  You can keep the old color scheme, switch to red, white, and blue, or even go for something much different.  The helmet could have a mushroom cloud on it, the radiation symbol, or an ICBM, among other options.  The hashtag potential is just as tremendous. #BEATDALLAS?  Good.  #NUKEDALLAS?!?  Better!  "Warheads" conjures up images of total destruction and instant annihilation.

Downside: "Warheads" conjures up images of total destruction and instant annihilation.  Whereas "Americans" fits that unassailable mold I talked about earlier, the more squeamish and sensitive would be "uncomfortable" with such a militaristic name, tethered to weapons of mass destruction.  Remember that this is the same city in which "Bullets" was deemed too unsettling.

Verdict: Little else in this world frightens me more than the sobering realization that the continued existence and proliferation of nuclear weapons effectively guarantees their eventual use.  Therefore . . . why not harness that terror for football purposes?!?  I love it.

To be fair, apocalyptic imagery is pretty intense.

If those symbols are too scary for people, this guy would be a very nice consolation prize.

Hail to the Founders.