Jordan Reed Will Not Be Wearing Special Protective Helmet This Season

Share All sharing options for: Jordan Reed Will Not Be Wearing Special Protective Helmet This Season

Jordan Reed knows full and well he has a big part on this offense. He won't be wearing any special protective helmets pic.twitter.com/eBHDpnGG7Z

And compared to TE's all-time:

No one needs to tell Gruden how to best use Reed. However, if Gruden ever has a question about Reed, he can call on McVay, who knows him better than anyone in the organization. The work they did together last fall could help Reed blast off this year. From the start, they developed a model coach-player relationship.

"He's obviously a great player, but I really enjoy him as a person, too," McVay said. "He's a great guy, so you want to continue to be involved with him."

Jordan Reed has been getting a lot of hype for his breakout potential.  He is consistently named the Redskin most likely to have a breakout season, and there are plenty of football pundits who believe he has the potential to be one of the best 2nd year players on offense this season.  With the additions of DeSean Jackson and Andre Roberts this year, there will be a lot of opportunities for Reed to benefit from the attention that they, along with Garcon, will generate from defenses.  Jordan Reed thrives at finding holes in defenses and exploiting them for big gains.  Coach Gruden likes to use TEs in his offense, and Reed is a versatile piece who can line up anywhere.

The concern going into this year is the concussion(s) that ended his season early last year.  Reed recently admitted that he hid the severity of the concussions in an attempt to play again, but he was repeatedly kicked out of practices when he didn't pass the concussion protocol tests.  Eventually the Redskins shut him down for the season to fully recover, and be prepared for 2014.

After being diagnosed with a concussion, Reed attempted to play the following week against the San Francisco 49ers, and again a week after that against the New York Giants, before coming to terms with the severity of the injury.

"Some games, I wasn't being completely honest in telling them how bad [the symptoms] were, so that was kind of why I was able to come back [to practice] and then getting kicked out again," Reed said.

For Reed, those symptoms included severe headaches in the morning and at night, nausea, and an inability to sleep.

"I started to get a little scared after about two months - like, ‘Maybe I'm going to be like this forever,' or something like that," Reed said. "But it ended up going away."

Media and fans alike have wondered if Reed would be wearing any specialized protective helmets this year to try to prevent another concussion.  Head injuries can be cumulative, and the more concussion Reed gets, the more likely he will be to suffer another one.  Concussions are getting more attention in football circles due to increased research, and the multiple lawsuits that have been filed against the NFL, NFLPA, and CFL by former players.

Helmets are being developed to lessen the chance of sustaining a concussion, but they are not being used by players across the league yet.  Last season everyone saw the over-sized helmet that Wes Welker wore after coming back from a concussion. 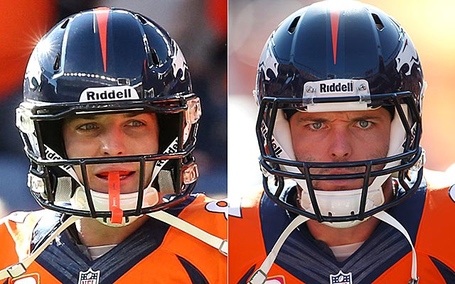 He claimed it wasn't a concussion helmet:

"I wouldn't say it's a concussion helmet,"

Welker said, his muscular arms laced with raw abrasions from shoulder to forearm after the Broncos' victory. "It's the next size up. A few players in here wear one. It's something they had me wear for safety."

There are other helmets being developed for all players to wear designed to disperse energy, reducing the risk of trauma like Riddell's Speedflex that several college programs will start using this season.

SpeedFlex builds upon technology used in earlier helmet models. Some of its features:

In a study by Virginia Tech-Wake Forest School of Biomedical Engineering and Sciences department head Stefan Duma and others, published on the Journal of Neurosurgery's website this past January, extensive research showed that helmet design does play a factor in player safety:

This exemplar comparison illustrates that differences in the ability to reduce concussion risk exist between helmet models in collegiate football. Helmet designs should be optimized to reduce head acceleration over the continuum of impacts experienced by football players. Helmet design may never prevent all concussions from occurring in football, but the evidence illustrates that it can reduce the incidence of this injury.

Studies are still ongoing for this helmet and others like it, but for now it appears that Jordan Reed does not intend to take any extra precautions this season.

Should Jordan Reed, and other players who have suffered concussions, be required to wear helmets like Riddell's Speedflex?

This poll is closed