The Redskins Cheerleaders will be holding a 2014 Calender Release Party next Thursday. 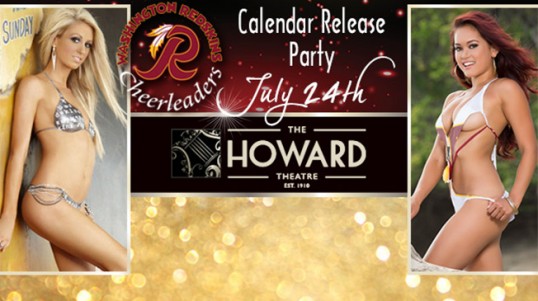 The Washington Redskins Cheerleaders 2014-2015 Calender is being released the same day that the Redskins open Training Camp to the public.  They are throwing a release party at the Howard Theatre in Washington, D.C. and tickets are available now.  The price is $20 in advance and $25 at the door.  Below is the link to the Theatre, and a brief description of the event.

From the Redskinettes to the First Ladies of Football, the Redskins Cheerleaders are the longest running cheerleading team in the NFL. Founded in 1962, and originally named the Redskinettes, this team has brought worldwide recognition to the Washington, D.C. area, the Redskins football team, and the NFL.

Partnered with the largest and most prominent Alumni Association among cheerleading teams--in 2008 over 1,000 strong--the women who have cheered and continued to support the Redskins have also helped raise millions since the team's inception and support more charities and community events every year.

The Washington Redskins Cheerleaders will be at Howard Theatre to release their 17th annual Cheerleader calendar. Come see this calendar first, meet the ladies, get personal autographs and watch an hour long show featuring their talents. This intelligent and beautiful group of women have been voted hottest in the NFL for several years straight.