ESPN's Most Memorable Play Tournament has eliminated the Redskins in the 2nd Round of voting.

ESPN's Redskins Insider John Keim solicited nominations on twitter and through his column, and whittled the list down to 3 choices that were voted on by fans.  The final choices were voted on and you can see the results below: 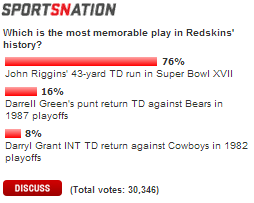 So the obvious choice from those selections won, it doesn't get much bigger than a Super Bowl moment.  70 Chip on 4th and 1 for the win.

From the moment this project was announced, and before I tweeted a word on it, there was only one play in my mind that deserved top billing. When a team hasn't won an NFL title in more than 40 years ... and it trails by four points in the ultimate game ... and it's fourth-and-1 ... and the running back goes the distance? How exactly do you top that? ortunately and wisely, the fans agreed with my take. Which is why John Riggins' touchdown run against Miami in Super Bowl XVII was the runaway choice for the top spot. Riggins' run received 76 percent of the more than 30,000 votes and was solidly ahead shortly after the choices appeared on the blog.

This put Riggo's run into the tournament as a #2 seed in it's bracket. The first play it was put up against was from the Indianapolis Colts.  Marlin Jackson's interception of Tom Brady in the 2006 AFC Championship game to send them to Super Bowl XLI was selected by Colts fans to represent their team, and it was decisively defeated by Riggo's Run, 63% to 37%.

This put the Redskins up against the Seahawks in Round 2.  Marshawn Lynch's Beast Quake run in the playoffs vs the New Orleans Saints defeated the Arizona Cardinals entry, the Kurt Warner to Larry Fitzgerald 64 yard TD in Super Bowl XLIII.  The Voting was not close with the Seahawks(bolstered by a suddenly swelling fanbase) getting 66% of the vote to the Cardinals 34%.

In this very meaningful July poll of the NFL's All-Time Most Memorable Plays, the Seahawks came out on top over the Redskins.  A play as important as Riggo's Run might have lost some luster since it happened over 32 years ago, or people that vote in polls like this weren't even born yet when it happened.  This play was a huge part of the Redskins first Super Bowl victory and made Riggins a legend in Washington.

While Beast Quake was an impressive play, and the crowd reaction was strong enough to cause a small tremor at the stadium, it was a meaningless play in comparison.  Seattle went to the next round to face their division rivals, the San Francisco 49ers.  The Niners Most Memorable Play selection was "The Catch", Joe Montana's TD pass to Dwight Clark to defeat the Dallas Cowboys in the 1981 NFC Championship game.  Riggo's Run vs the Catch would have been a great matchup of iconic NFL plays, but it wasn't meant to be, and the Catch handily defeated Beast Quake 65% to 35%. 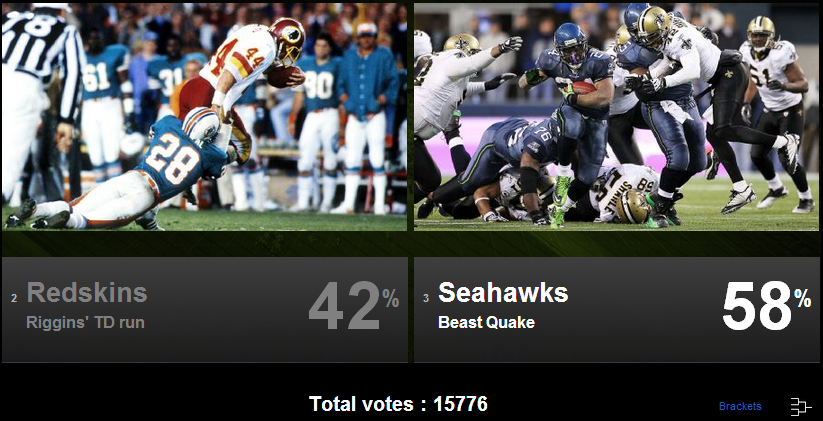