A look at three different Top 100 NFL Players lists, and which Redskins players are named.

It's July and besides the predictable Tanard Jackson suspension, the highly anticipated supplemental draft, and daily Johnny 8ball updates, there really isn't much going on.  Which means it's the perfect time for fans, bloggers, and NFL media personalities to make lists for everything and blindly predict the outcome of the upcoming season.  I have pulled out 3 different top 100 lists from the bloated blogosphere for your perusal.

First up is Mr Pete Prisco, who many consider to be a Redskins hater.  While this may be true, it is just as likely that he is a click hoarding writer who loves to troll all fans for his own amusement, especially on twitter.  Prisco also consulted with 4 current NFL General Managers when making this years list.

46. Trent Williams, T, Washington Redskins: He was one of the top left tackles in the league last season, although he did have a couple of two-sack games.

NFL GM No. 2 on Williams: "Has some inconsistencies to his game, but physical tools are all there."

78. Pierre Garcon, WR, Washington Redskins: He led the NFL with 113 catches in 2013, even though the Redskins' passing game struggled.

Garcon stat: In his first season in the league in 2008, Garcon had four catches for the Indianapolis Colts. He's had 341 in the five years since.

86. Brian Orakpo, OLB, Washington Redskins: Coming back from an injury-shortened season in 2012, Orakpo had 10 sacks, which is why the Redskins placed the franchise tag on him this spring.

Orakpo stat: Seven of his 10 sacks last season came in the final eight games, showing he was fully recovered from the torn pectoral muscle he suffered in 2012.

88. DeSean Jackson, WR, Washington Redskins: His big-play ability is second to none. Look at his 16.2 per-catch average.

Next up we have his counterpart at CBS Sports, Pat Kirwan. Kirwan spent 25 years in football at all levels before moving on to writing books, hosting radio shows, and writing articles for NFL.com, CBS Sports, and other outlets.  His list comes from a different, and some would say more knowledgeable, perspective than Prisco's.  So how many Redskins players make Kirwan's cut for 2014?

55. Alfred Morris, RB, Redskins: He is humble and quiet and just keeps rushing for over 1,000 yards per season.

83. DeSean Jackson, WR, Redskins: A big-play guy who was shown the door in Philly, but will rebound in Washington.

97. Trent Williams, OT, Redskins: He never gets any help and gets the job done.

And finally we'll look at the Top 100 list that most people have already seen and complained about.  NFL.com has turned a simple Top 100 list into a month long summer time programming event, dragging out the list into 10 spot shows, followed by reaction shows, accompanied by anonymous NFL players reacting on twitter, and finished off with more reaction shows after the final list is revealed.  It's truly the crown jewel of their June-July programming.  This list is voted on by current NFL players, and takes into account past performance and future projections.

The third Redskins player to make the 2014 list is LT Trent Williams.  Williams continues to be one of the top Left Tackles in the league and was voted into the Pro Bowl for the second year in a row following last season.  Williams was presented by Eagles' Mychal Kendricks and Najee Goode, and Giant Damontre Moore.  The running theme of their commentary was that Trent Williams is big, and surprisingly quick, and he is tenacious when he gets his hands on you, and plays with an attitude.

These are all traits that have made Williams one of the top Redskins players over the last few years.  Williams is a big part of the Redskins running game, and is instrumental in breaking open holes for RB Alfred Morris.  Coach Gruden seems to be bringing in players with more size for the offensive line, and Trent Williams has the size, speed, and talent to fit into any scheme the new coach plans on running.  Trent Williams has been the anchor to the offensive Line for the last few years, and that will not change going forward.

The next Redskins player to make the list is former Philadelphia Eagles WR DeSean Jackson.  He is coming off of the best season of his career, starting 16 games and getting 82 receptions for 1332 yards and 9 TDs.  He was also voted into the Pro Bowl for the 3rd time in his 6 year career with the Eagles.  Jackson was cut from the Eagles after attempts to trade him before free agency failed.  Jackson was quickly signed by the Redskins, and joins RGIII, Pierre Garcon, Andre Roberts, Jordan Reed, and Alfred Morris in Head Coach Jay Gruden's new offense.  Expectations are high with Griffin another year removed from his ACL surgery, and with Jackson in the mix to be the deep threat the Redskins have been needing to open up their offense.

From my write-up when this selection was announced:

Pierre Garçon is the first Redskins player to be named to the NFL Top 100 list, coming in at #80.  In 2013 Pierre Garçon led the NFL in catches with 113 receptions, and he also broke Art Monk's single season receptions record with the Redskins.  His 1,346 receiving yards were the 8th most in the NFL last year, and Garçon was one of the few reliable weapons on the Redskins' offense in an otherwise forgettable year.  Last season was Garçon's best season as a pro, but he was not voted into the Pro Bowl.  One reason for his Pro Bowl snub was despite his high volume of catches and yards, Garçon only reached the endzone 5 times last season.

Now let's get an overall list of which players were picked between the three very scientific lists that we are looking at today.

Some obvious takeways from looking at this compilation of prognostications: 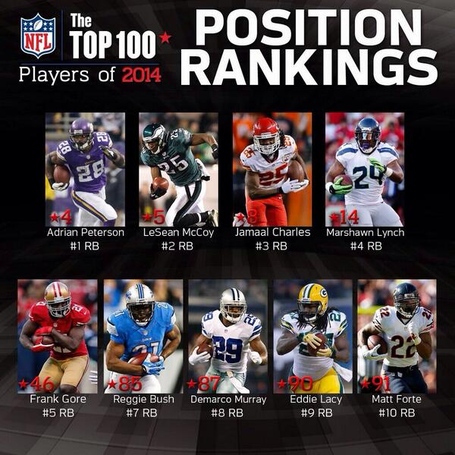 Megatron leads the way! Every WR on this year's #NFLTop100! pic.twitter.com/pYe1xQvGLi