New details are emerging about the case between Jackson and Rosenhaus.

Share All sharing options for: DeSean Jackson vs Drew Rosenhaus in Federal Court

DeSean Jackson continues to deal with legal issues that started when he was with the Philadelphia Eagles.  In April, an arbitrator ruled that he had to repay his former agent, Drew Rosenhaus, $516,415 of the $777,793 that was being sought in the case.  The money was for loans, interest charges, credit card charges, insurance premiums, and agent fees.  Jackson argued that the money loaned to him was an inducement to get him to sign which violated NFLPA rules and regulations, but the arbitrator ruled that Rosenhaus did not induce Jackson to sign.

The agreement Rosenhaus and Jackson signed stated that $175,000 of that $375,000 would be forgiven if Jackson allowed Rosenhaus to negotiate his next contract. If Jackson had fired him, he'd have to pay back the full $375,000 with interest (7 percent).

Jackson ultimately allowed Rosenhaus to negotiate that five-year deal with the Eagles in 2012 that had a potential reported value of $48.5 million. Jackson was released by the Eagles after earning $17,750,000 of that money.

Jackson and Terrell Owens(previously) have both brought up the fact that there could be a conflict of interest with the NFLPA using arbitrator Roger Kaplan who rules on most of these matters.  Kaplan failed to disclose to Jackson and the union that he had been receiving money from Rosenhaus to rule on a dispute between Rosenhaus and a former employee while he was hearing Jackson's grievance.  This could create the appearance of bias due to the failure to disclose their financial relationship.

Jackson and his attorney have said they plan to appeal Kaplan’s orders in federal court.It’s an interesting twist to an ongoing dispute between the two parties, one that is complicated by the fact that Rosenhaus has reportedly had a financial relationship with Kaplan, whom the NFLPA uses almost exclusively to handle these disputes.

Drew Rosenhaus was reportedly the reason that DeSean Jackson tried to holdout during the 2011 preseason after failing to get a new deal during the 2010 season.  Rosenhaus claimed to have influence with Eagle's management, and could get him a new deal, but that did not happen and Jackson was not happy about the failed attempt.

Jackson was so angry over the botched holdout that he says he told Rosenhaus he was going to fire him, but ended up staying with the agent after Rosenhaus paid him and his family $143,088 to remain a client. NFLPA regulations prohibit agents from "providing or offering money or any other thing of value to any player … to induce or encourage that player to utilize [his] services."

"We went over the contract on the car [on the side of the road]," Rosenhaus said in an arbitration hearing in September of 2013. "I waited until I saw on my phone that it was after midnight. We proceeded to execute the contract. After executing the contract, I then gave DeSean the money that we agreed to give him. I gave it to him in the [Louis Vuitton] bag."

There is speculation as to why Jackson is doing this.  To avoid paying over half a million dollars is a pretty big reason, but getting Rosenhaus in trouble with the NFLPA could also be a reason.  Rosenhaus will most likely not receive anything more than a slap on the wrist from the union unless Jackson has some damning evidence against Rosenhaus.  The arbitration is done, even with the allegations about the relationship between Rosenhaus and the arbitrator.

Asked De Smith about allegations like this a few weeks back. He says the CARD committee of the NFLPA will be active: http://t.co/HHhep56Bpf

Rosenhaus has been investigated by the NFLPA in the past for a relationship with financial adviser Jeff Rubin and a number of Rosenhaus' NFL clients.  Rosenhaus and his brother claimed complete ignorance and shock at the entire situation that led to his clients losing $43.6 million in a failed Alabama casino.

The relationship has been scrutinized in part because of a series of issues surrounding Rubin, who is at the center of a bankruptcy filing for the failed casino that cost the players as much as $43.6 million.Starting in 2003, Rubin was questioned about financial transactions that could have raised red flags for a financial adviser, a five-month Y! Sports investigation has found. That included allegedly mismanaging a player’s game checks in 2003 and settling an issue related to allegedly falsified insurance documents in 2004.The NFLPA is looking into whether Rosenhaus should have paid closer attention and kept his clients away from Rubin, founder of Pro Sports Financial. Multiple sources, including free agent NFL wide receiver Terrell Owens, indicate Rosenhaus actively recruited players with Rubin and valued that association because it helped him increase his business. Although Rosenhaus specifically denied any relationship to the casino and there is no evidence to indicate he profited in any way from the project, his client base grew to more than 100 players during the seven years Rosenhaus and Rubin were associated. Rosenhaus currently represents about 140 players, more than any other agent in the NFL. 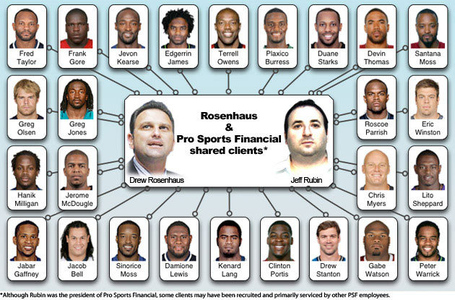 You'll notice a few familiar faces in this picture, a few current and former Redskins were burned in a failed casino deal that was organized by Jeff Rubin, a Rosenhaus associate.  Another familiar face on the list is Eric Winston, the OT who seems to be linked to the Redskins before free agency starts every season.  He is also the current NFLPA President, and it doesn't seem that he has disregarded his past experience with an agent who had questionable business practices.  He, along with NFLPA Executive Director DeMaurice Smith, have both talked about being more aggressive with predatory agents who deal with young men getting their first or second big deals.

USA TODAY Sports: DeMaurice Smith has spoken about agent regulation as an emphasis going forward. There were six agents disciplined in 2013, with appeals on two others pending. There also have been some agents voicing their frustrating about their lack of say on union and collective-bargaining issues. What do you think should be the role of agents in NFLPA business?

Winston: I’ve been on the CARD committee (Committee on Agent Regulation and Discipline) the last year, and I can tell you it’s a priority for me to make sure that every agent that’s not in it for the right reasons is no longer part of this union. The agents work for us. They are agents of the union, agents of the players, not any other way around. That’s first and foremost. Those guys (who are in it for the wrong reasons) aren’t welcome, and we’re going to straighten out the rules, the penalties, that if they’re making a large amount of infractions, that they’re gone and they’re not welcome back. But that’s a small amount of those guys, and I completely agree with the fact that we need to continue to reach out. We did a small agent meeting in Indy this past year of (agents) that hold a good amount (of clients) and it was a good, productive meeting. They got to voice a lot of their opinions, a lot of what they are seeing, and in my opinion – this is solely my opinion – they’re kind of soldiers in this, too. They’re boots on the ground. They’re hearing directly from teams. They have probably more access to general managers and the teams than most of us do in the negotiating sense. They’re going to know a lot of things, and I think there’s a lot of useful knowledge from them. But we’re going to engage them. I’m going to engage them. I’m going to expect them to engage us, and I’m going to expect for them to help us. They don’t work for anybody but theNFLPA, and I think they need to understand that. But at the same time, the door’s open. My phone’s always available to them, and if they’ve got some sort of suggestion or they see something that needs to be fixed, then we’re all ears, because I know they see things from a unique perspective and we need to understand that and we need to give them that due. A lot of them have been here for a long time and know a lot about the salary cap, know a lot of the game, know a lot about players and I think some of them genuinely want to help and I want them to help us.

USA TODAY Sports: What are your biggest concerns with those agents you say aren’t in it for the right reasons?

Winston: The agents have always been the innovative guys pushing the envelope as far as getting guys contracts, setting a high-water standard. The things I worry about are the agents that don’t do it for the right reasons – they’re steering guys wrong, whether it’s in a negotiation or in some other aspect of life. We’ve had to discipline guys because they’re in business with business partners they shouldn’t be with, financial guys. That concerns me because it’s the overall welfare (of players), and I think a lot of guys for a lot of good reasons go to their agent for a lot of input in what they’re going to do. The biggest thing that worries me about agents is them not working the way they should with us. I want to increase that transparency. I want them to feel like they’re welcome and can make some kind of suggestions. But at the same time, they’ve got to keep doing what they’ve always done, and them bickering about where the (salary) cap is is not going to get anything done. They’ve got to look for innovative changes. They’ve got to look for different ways to get guys even more guaranteed money than they already are and I think that’s got to be a consistent push for them.

So what does this all mean for the Washington Redskins?  It is a distraction for DeSean Jackson right now, but it has not been blasted over the major news...yet.  Jackson and his lawyer will attempt to get the arbitrator's decision reversed, but it most likely will not happen.  Will Rosenhaus get into trouble with the union?  I don't know if it will come to that, how serious the NFLPA is about going after agents, or how much of a case there really is here.  Further details are sure to come out soon.

[UPDATE: 6/9/2014 4:30PM]  Yahoo Sports has shared a copy of the court papers filed, and reported accusations made by Jackson against the NFLPA and DeMaurice Smith.