After posting my article on the Eagles earlier this week, I was asked a couple of times about how some teams managed to stop the dynamic Chip Kelly offense in 2013. After watching some games, a bit of light reading and some other analysis it is clear that there are some ideas that teams used to slow this offense down.

Firstly I would like to start with the most important aspect I have found in my research. One thing that really stood out to me is that the teams that beat the Eagles last year all executed the fundamentals really well.  In order for these tactics to work you have to rely on good tackling, coverage, and organisation.  Tackling is especially important as you are going to be spread out and matched up against playmakers such as LeSean McCoy who can beat you in a split second. Your veteran players will need to organise the defense quickly, and everyone needs to know their jobs and assignments. Penalties are a killer as you can't afford to give away extra yards to this team. Furthermore, the special teams and field position battle were especially important. Giving the Eagles as much distance to travel as possible makes it more difficult for their offense to work it upfield.  Obviously these principles apply when facing any team, but are especially important in this case.

Let's look at some of the other specific tactics used against them last year.

The read option highlights one defensive player (usually a defensive end) as the main read from which a QB will (a) choose whether to hand off to the running back, or (b) keep it and run round the edge rush for a quick gain.  If run properly the defensive end can not win.  One method of stopping this is to let the DE bite on the running back and then scrape the inside linebacker outside him and towards the QB.  The weakness of this play against the Eagles is that this leaves the TE and slot receivers with more space between the linebackers in the middle of the field - a prime spot for Kelly who will run play action to pick apart this coverage.

Another option is to simply tell your DE or read player to hold and play the QB in a zone read option.  You can see an example of this here against the Chiefs: 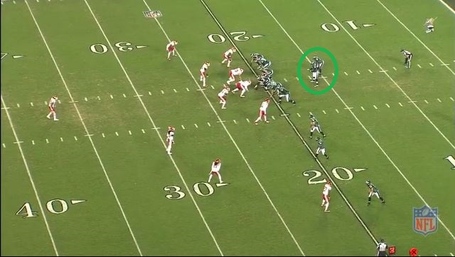 See above image how the Eagles are lined up in the pistol formation. McCoy's placement to the QB screams zone read, and should put the left defensive end on alert for a read on him. 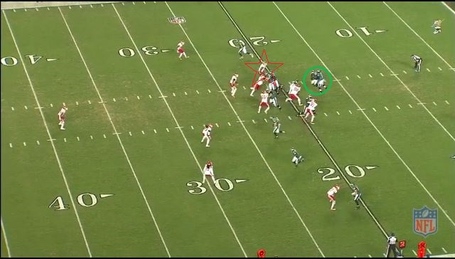 After the snap the DE (highlighted with a star above) makes his way forward but notices that Vick and McCoy are executing the classic read option look. He immediately holds his ground to play the QB, leaving his teammates to defend the hand off to McCoy for a minimal gain. This is where good tackling and strong defensive lines come into play. Holes and running lanes can not be left open or McCoy will exploit them.

Another point to notice on this is that teams let the Eagles choose the run by not stacking the box. They negated some risk by always keeping a strong safety ready to press the LOS as soon as it was obvious it was a running play. This safety has to be careful not to line up or shade too close to the line of scrimmage otherwise he risks opening up screens and other quick plays to the outside, which are the classic check down option in this scenario.

I watched this happen over and over in their losses against the Chiefs and Cowboys.  Obviously this puts a great emphasis(and therefore risk) on your defensive line and linebackers to come up and make a tackle on McCoy, who is one of the shiftiest runners in the league. Good tackling and support is essential for this to work.

As soon as the running game starts to fail, one of the first plays that the Eagles turn to is the screen. Playing press man coverage allows the CBs to get into the faces of the WR's and jump on the quick pass to make a play before the WR can get set. Shedding blocks is essential here, otherwise you will give up first downs and maybe more.

Kelly likes to counter this defensive ploy by sending a man in motion behind the LOS and out to the flat to catch the screen.  When this happens the covering defender will not be able to press the receiver in time, but the other CB's still need to try and shed their blocks and make a play to hold up the receiver while support arrives - to minimise the gain.

One other thing I have noticed with man coverage is that Foles does not like to throw into tight windows, and if the coverage is tight, he will not release the ball quickly.  Let's look at an example from the game against the Cowboys in Philly in which the Cowboys limited the Eagles to just 3 points: 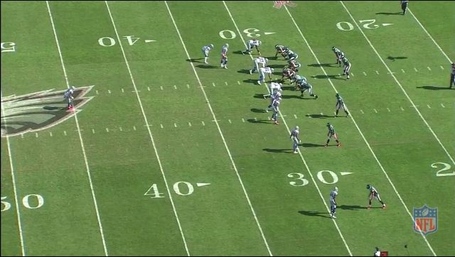 Notice in this picture how the Cowboys CBs are pressed right up against the Eagles receivers.  Even after some pre-snap motion the Cowboys manage to remain tight against their men. 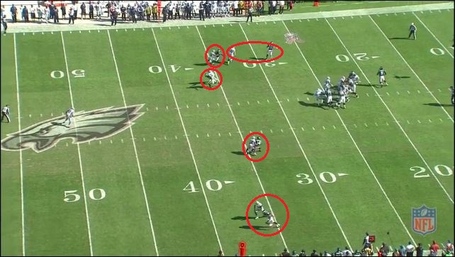 Post snap - look how tight the coverage is. Not many QBs would like to throw into this coverage. 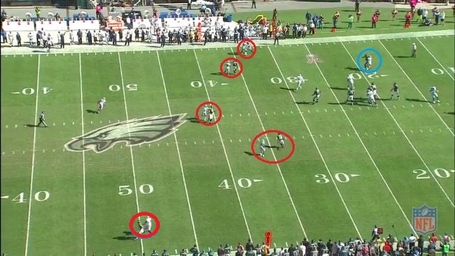 Foles breaks the pocket and scrambles out to his right.  The secondary stays with their men and Foles starts to panic as some pressure starts to catch up with him.  He throws the ball away and gets called for intentional grounding.

A great comment was raised in my earlier article regarding the number of snaps that the Eagles offense will be running, which naturally calls into question the durability of their players.  This is very true, and to extend this point further it is also worth noting that this offense really impacts the Eagles defense. This is compounded when the offense can not stay on the field and is running 'up tempo'. The defensive players will not be getting adequate rest between phases and tiring out throughout the game.

Most, if not all, of these QBs are excellent when it comes to keeping the ball safe (Romo jokes aside), avoiding pressure, and managing the clock.  In every single game they lost last year they lost the time of possession battle, in some cases quite considerably (e.g. the Chargers had the ball for 40 mins in their matchup).

Not only does keeping the ball mean that the Eagles offense is not on the field, it also means that the Eagles defense is put under extra stress and forced to play more snaps than they want to.  Fatigue in any professional sport is often a deal breaker, and this is highlighted here.

One thing that Dallas defended really well in the above examples is a counter move frequently used by Kelly.  McCoy will often be sent out on wheel or corner route when Kelly knows his receivers are getting caught up in man coverage.  The reasoning behind this is sound, in that the WRs are matched up well with corner backs and safeties, yet McCoy has the ability to shred the LB's who are marking him.  I distinctly remember this happening to Ryan Kerrigan last year in our second game against the Eagles.  It is therefore essential that any defensive coordinator or captain knows who is marking McCoy should the play turn into a pass. Ideally you keep your more athletic LB's on McCoy to negate the RB's speed and change of direction as much as possible.

McCoy often sells to the defense that he is simply blocking by chipping or delaying his run out of the backfield.  This is something Kelly likes to do with his tight ends as well, especially off boot legs and fake zone runs. Vigilance and good organisation are the keys to defending this, and if you know that your linebackers are poor in coverage then so does Chip Kelly.  I fall back again to the point raised in my previous article where London Fletcher was specifically targeted by Kelly in our week 1 matchup.  Fletcher, as we all know, was getting on in years and not able to cover the ground he used to.  Setting him up was an easy task and led to many yards for the Eagles up the middle on simple pass routes and option concepts with tight ends.

5) Blitzing & pressure along with disguising and stemming the defense.

As discussed in the first article, the Eagles run a lot of plays that rely on the QB to make pre-snap decisions on whether to run or pass based on the number of defenders in the box. For example, if there are 6 defenders in the box (usually diagnosed by seeing two safeties) it indicates a numbers advantage for the offense up front, and therefore a running play could be the best option. Needless to say, disguising your intentions with bluff formations and pre-snap movement can confuse the QB and make this decision more difficult and risky. The zone blitz can also be effective here as this relies on dropping players out of position and into coverage while sending blitzers from surprise angles. This can ruin offensive protection and bring quick pressure to the QB. Taking this pre-snap read out of the equation is a major boost when playing the Eagles as it slows down their offense, and limits their playbook when they are trying to rush through plays.

How Nick Foles Performed Against Pressure/Blitzes

How Nick Foles Performed Against Pressure/Blitzes

Looking at how Foles performs under pressure is also interesting. On tape I have always felt he was quick to surrender when under pressure. PFF recently analysed all QBs last year in this area, and for the most part Foles performed well, if only above average in some categories. Where he struggled however is when a team blitzes and he felt the immediate pressure. When this happens his completion percentage dropped markedly to 48% (from 79.9% with no pressure). You may say that this happens to every QB, but in this instance Foles' PFF grade dropped to 26th in the league. This confirms my feelings when watching him play, and certainly against the Cowboys in the example above he was pressured heavily throughout. He never felt comfortable in the pocket and was hurried through his decisions, making him less accurate throughout the game.

So that is my summary of how the Eagles offense can be stopped.  Whilst this is specifically targeted at the Eagles, there is a whole cat and mouse going on at the college level where this up tempo, spread offense is more prevalent.  Using formations such as 3-3-5 (or 'stack') have also proven successful against this offense, so we may see this in action more against the Eagles this year.

Finally, the Eagles will play some excellent defenses this year (as do the rest of the NFC East) whilst facing the excellent NFC West.  In particular the Seahawks defense is perfectly matched to neutralise this offense, so watching what Kelly does in this game will be fascinating. The 49ers coach Jim Harbaugh also has direct experience in facing Chip Kelly from his college days too, so he will not be surprised by this offense.

If anyone has other concepts or ideas about how to slow this offense down please add your comments below.