Matthew McConaughey visited Redskins Park yesterday to watch the last day of the Redskins second set of OTAs.  He was interviewed by Larry Michael for Nation and talked about why a 4 year old who lived near Dallas became a Redskins fan(it involves Westerns and hamburgers).  Redskins Hall of Fame LB Chris Hanburger also called in to briefly talk to McConaughey.

He also talked about the reason he was in town.  McConaughey is announcing a partnership with the Redskins Charitable Foundation and the Just Keep Livin Foundation, a charity that he and his wife Camille started to help high school kids lead active lives and work towards goals to better their lives.  He announced this in conjunction with Alfred Morris' charitable event last night, "Movies with Morris" which raised over $60,000.  The partnership will help McConaughey's organization expand to the Washington area. DC News FOX 5 DC WTTG

A look at the playbill, and what movie each Redskins player picked to show last night,. 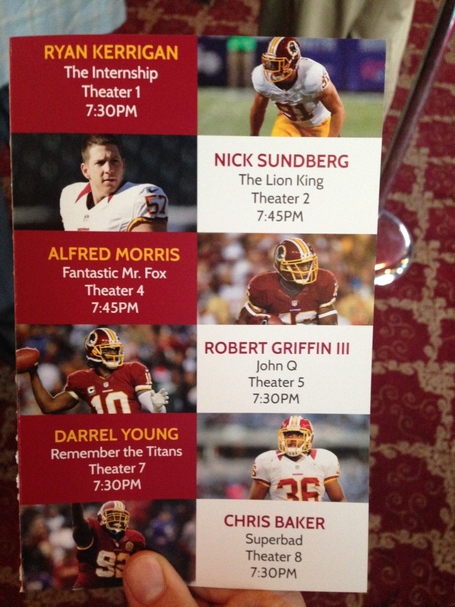 Griffin III knows that fact first-hand, so he’s playing off that theme for his "RGIII’s Friday Night Lights" football camp Friday, June 13, in the D.C. area. It’s another project that’s currently still in the planning stages, Griffin III said. "It’s really focusing on football and other sports, as well – some athletic drills" Griffin III said. "Anybody who knows my story knows I played a lot of different sports. We're going to try to do that for about 200 to 250 kids to keep it limited to I can interact with everybody, and really have it be a fun experience."

The next day, Griffin III will be lending a helping hand at the "Driven by Our Ambitions" educational seminar and football camp at Coolidge High School in D.C., a platform for high school student-athletes and their parents/guardians to receiver critical information that will help them continue their education beyond high school, while using athletics as a catalyst to help get them there. "It's about really giving back to the people here in inner-city D.C. to really give them a look into what it's like to be a professional athlete, and how our mind operates," he said.