Redskins Recon: Weeks 3 and 16 Versus the Philadelphia Eagles

As usual the Washington Redskins play the Philadelphia Eagles twice in 2014 - firstly in week 3 at Philadelphia and then again in week 16 at home. The Eagles swept the Redskins last year on their way to the NFC East title and a wildcard playoff berth, so these games will be a tough test for the Redskins, and one that we should look to as an early measuring stick for the NFC East in 2014.

Share All sharing options for: Redskins Recon: Weeks 3 and 16 Versus the Philadelphia Eagles

When these two match up for the first time in 2014 it is going to be big news due to the offseason exploits of Chip Kelly and DeSean Jackson. However what I am looking forward to the most is how the Redskins are going to contain a potent Eagles offense, especially after having a whole offseason to look at it in more detail and figure out ways of stopping it. This offense is a major reason why the Eagles ran away with the NFC East title last year and made the playoffs in Chip Kelly's first year as head coach.

Detractors would look at the quality of their divisional opposition and throw out a ‘gimmicky offense' remark as the main reasons for this initial success, but I for one think the Eagles are a legitimate threat, and their offense won't be an easy challenge for any defensive coordinator. Chip Kelly's offense is designed to put the power in the hands of the QB - Nick Foles, and stress the defense in terms of stamina, organisation, depth and adaptability.

Before we look deeper into this offense - a question for you. What would you define as the core principles of the 'Chip Kelly Offense'?

I am sure many of you said things like the following:

All of which would be right, however not many people realise that the main objective of a Chip Kelly offense is to run the ball and run it well. Many of the concepts mentioned above are simply methods he uses to identify and create running space. It is highly likely that a major attraction for Kelly when joining the Eagles in 2013 was the presence of an elusive running back we all know and hate; LeSean McCoy. It is also no coincidence that in 2013 McCoy led the league in yards (1,607), and the Eagles as a team were the number one rushing team as a whole.

The Eagles achieved this by using Kelly's staple running game which consists of inside and outside zone, mixed in with a few other power schemes for good measure. Furthermore many of these running plays are zone read plays, using the read option to create confusion in the defense and a numbers advantage for the offense.

The other, often misunderstood, aspect of Kelly's offense is his use of packaged plays. Due to the growing influence of college football, these plays have become a more common feature on most teams' playbooks, but unless you know what you are looking for the average football fan would never even realise they are being used.

A packaged play is a way of giving the QB the power to make decisions pre and post snap about how the play will pan out by reading the defense. Some key points about packaged plays:

Set your mind back to the Redskins opener in 2013 vs the Eagles and recall how London Fletcher, one of our most experienced defenders, was being made to look like a rookie by Vick and his tight end. How is this possible? This was because Fletcher was the key read in a packaged play that made sure whatever he chose to do he would lose.

So let's take a look at how this works looking through the eyes of Nick Foles. I have suggested a play call below. I am not insinuating that this is something the Eagles use, but in theory it could easily be part of the Kelly offense either as a whole or in smaller pieces. I have then provided a decision tree that shows how the play would pan out. 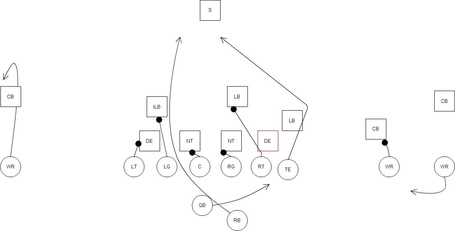 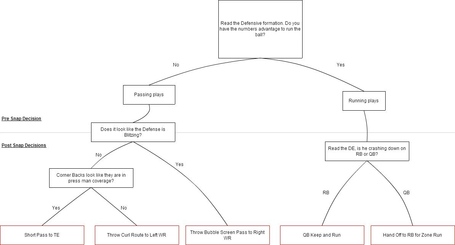 As you can see, this one play has a potential 5 outcomes based on how the defense reacts and lines up. As you can imagine, this is extremely difficult to defend against, especially when you combine this with the Erhardt Perkins scheme (the reason for many of those signs and boards on the touchline) with up tempo and no huddle elements as well.

Once the play is over the Eagles will often rush up to the new line of scrimmage and snap the ball again within a few seconds. Some interesting notes from this article on Grantland (a must read by the way) explains:

...  they actually have three settings: red light (slow, quarterback looks to sideline for guidance while the coach can signal in a new play), yellow light (medium speed, quarterback calls the play and can make his own audibles at the line, including various check-with-me plays), and green light (superfast).

The reasons for their up tempo offense are numerous, but to cover a few:

Note that this is different to the up-tempo offense that we have traditionally seen from veteran QB's like Manning and Brady, who will line up quickly but take their time to snap the ball while making audibles and changing formations. This offense looks to snap the ball as quickly as possible. The benefits of providing the QB with numerous options within a single formation (or set of formations) make it simpler to have a varied offense without the need to huddle.

Just to reiterate, all along the goal is to create a favourable situation in which Foles can hand the ball off to McCoy for an easy first down or more. Only in this system, if the defense wants to take that away, the QB has numerous other options to play with. If run correctly it is a 'choose your poison' scenario for the defense, who simply can't win.

Now it is easy to see how adding some of these kind of plays and up tempo offense can create a very potent attacking force, but with a whole offseason of preparation, should we expect to see last year's success replicated in 2014? To a degree I believe we should, I do think they will challenge for the NFC East again, but I also think they will come unstuck in some games as coordinators include more disguised blitzes and bluff formations to confuse Foles. I also believe that this team will be better prepared and adjusted to this system, and Kelly will also add a few wrinkles too.  On the flip side it will be very interesting to see how much impact the loss of DeSean Jackson will have on opposition schemes against the Eagles. His ability to stretch the field and make plays was a huge factor for this offense last year, and teams would often leave themselves thin elsewhere in order to double up on D-Jax. this will no longer be the case, and the remaining Eagles receivers will need to work harder for their separation.

On the other side of the ball the Eagles have added some depth in the secondary and pass rush through free agency and the draft. One negative side effect of this up tempo offense is that a defense needs to be prepared to see more snaps, especially when you are struggling to get some pass rush as the Eagles did in 2013.  It is no surprise therefore that defense was a focus in the offseason, and the green shoots of improvement towards the end of 2014 will need to continue in order for the Chip Kelly offense to experience continued success.

Finally, along with the rest of the NFC East, the Eagles will face some very tough defenses this year in Seattle, San Francisco, Arizona and Houston to name a few. It will be fascinating to see how these forces react to one another, and especially if teams start to figure out how to limit this offense.  By week 16 the Redskins may be in a much better place to understand what limits the Eagles having watched the above teams put them through the grinder.

To wrap up let's take a quick look at the Eagles offseason activity:

QB - Nick Foles will start after a good 2013. They added Sanchez and lost Michael Vick.

RB - LeSean McCoy to continue his 2013 form, and let's not forget that the Eagles added Sproles through a trade with New Orleans. Sproles will be an interesting player to watch in this offense.

OL - Added Gardner (RT) from Texans through FA otherwise this group stays as it was. Left tackle Jason Peters is a rock for them and has consistently kept Orakpo out of games in the past.

WR - Obviously no DeSean Jackson as he is playing for a better team. The Eagles added new talent through the draft signing Jordan Matthews and Josh Huff.  All eyes will be on the Eagles WRs in 2014 and of course any drop in production could create an awkward moment for Chip Kelly.

TE - No change to this group who performed well in 2013

The Eagles focused heavily on defense in the offseason:

OLB: Marcus Smith was picked 26th overall in the draft and the hope is that he will help knit this relatively new 3-4 defense into a more dominant unit.

S - A few players added to compete for the starting positions this season: Malcolm Jenkins and Chris Maragos through FA and then draft pick Ed Reynolds.

The feeling in Philadelphia is that this group of players are now becoming Chip Kelly's team, which brings with it the pressure of performance and delivery. Will they take a step backward or push on and improve again? The offense will face challenges to replicate it's successful 2013 campaign, and has lost one key piece of the puzzle. The defense took strides last season and with the addition of a few key pieces (particularly Marcus Smith) they will look to improve once again.

Keys to the game:

So that wraps up our first divisional rival in the Philadelphia Eagles.  Next week we will be looking at another divisional opponent - the New York Giants.  Before I go however I would like to point you all in the direction of an amazing website where I learned a lot about Chip Kelly and his offensive strategy. This is an Oregon Ducks fan site, run by a great guy who creates videos detailing the team's strategy.  An invaluable resource for anyone wanting to learn about Chip Kelly and his coaching philosophies.