Pro Football Focus has declared that DeSean Jackson was the most productive WR in the NFL when running crossing routes in 2013. How did Robert Griffin III do throwing the crossing route last year, and what about the Go route?

Share All sharing options for: DeSean Jackson: King of the Crossing Routes

Everyone is speculating what DeSean Jackson will bring to the Redskins' offense this season.  With a new coach, it is hard to judge how much of last year's offensive scheme will be used, and how many new wrinkles Jay Gruden will bring to the team.  DeSean Jackson has the speed to take the top off of a defense and demand attention deep, which can open up the middle of the field for players like Pierre Garcon, Andre Roberts, and Jordan Reed.

Jackson had the best year of his career under first year Head Coach Chip Kelly.  He caught 82 passes for 1332 yards, 9 TDs and a 16.2 yards per reception average which earned him his third Pro Bowl appearance.  He also started a full 16 games for the first time in his career.  Some of his fellow WRs weren't as lucky avoiding injuries.  Jeremy Maclin and Arrelious Benn both tore their ACLs before the season started, making Jackson the unquestioned top target and allowing an average WR like Riley Cooper to also have a career year as the #2.

Pro Football Focus published an article through E$PN IN$IDER looking at every route on the traditional route tree, and which wide receivers had the most success running them in 2013.  PFF has started to track every route that every receiver runs as they describe here:

If you could have one NFL wide receiver to run each of the pass patterns on the route tree, whom would you choose for each route? We can answer that question with a process that we at Pro Football Focus added for 2013 -- we started tracking every route that every NFL receiver ran, giving us not only a description of the passing concept but also an in-depth look at what each receiver is asked to do over the course of a season.

We can track how often a receiver runs each route, how often he's targeted and what he does with those targets. Instead of looking at just a receiver's total numbers, we can get a snapshot of where the yards came from and how efficiently each receiver ran each route.

So which route was DeSean Jackson the best in the NFL?  Not the Go route like some people would assume(although that is the route he ran the majority of the time), that honor went to Alshon Jeffery with 469 yards, the most by any one receiver running one type of route.  Jackson was the top receiver by yards at running crossing routes.  According to PFF the crossing route accounted for 273 of his 1332 receiving yards last season.

Not just a go-route option in Eagles coach Chip Kelly's offense, Jackson did a lot of damage on the crossing route last season, whether it was the shallow drag or the deep crosser behind the linebackers. His speed was an asset, as he was able to run away from underneath coverage on the drag while sifting through the coverage on the deep crosser as part of the downfield concepts that Kelly teaches.

Jackson ran 70 crossing routes on the season, picking up 273 yards, which made up 20.5 percent of his season total of 1,332. With Jackson moving to the Redskins this season, expect new head coach Jay Gruden to tap into the receiver's ability to stretch the field both horizontally and vertically with the crossing routes.

How did Robert Griffin III do on crossing routes last season, because what we really care about is how Jackson will perform as a Redskin right?  According to PFF's numbers, Griff was 30 for 44 for this route for a 68.2% completion rate.  He scored 3 TDs, was intercepted 2 times, and had 3 receiver drops.  He rolled out 27.3% of the time, and his receivers had 208 YAC.  PFF rated him the 26th best QB at crossing routes out of 35 qualifying QBs.

What about the Go route, which many people expect DeSean Jackson to be running a lot this year?  Last year was not very good for Griff's deep ball for a variety of reasons(no not Aldon Smith).  The constant pressure up the middle didn't allow time to set up deep passes.  Griffin's mechanics were very noticeably off last year coming back from the ACL injury, and he would constantly throw off of his back foot and not finishing the weight transfer on his plant leg causing passes to float and/or be inaccurate.  This has been a major focus this offseason, as Griffin went back to QB coach Terry Shea to fix his throwing mechanics and footwork. Another year removed from his season ending knee injury(and Darth Shanahan) has also helped his confidence levels in his knee and game in general.  Also the Redskins defense and special teams were...not good, putting the offense in the hole(and to be fair the offense wasn't helping the other two units out with some of it's play last year either).

So back to the Go route last year, it wasn't good.  Griff was 6 for 20 for 124 yards and a 30% completion rate.  He did score 2 TDs with 0 INTs and 0 dropped passes.  For a comparison we'll look at Jackson's former QBs Nick Foles and Michael Vick.  Foles was 9 for 24 for 232 yards and a 37.5% completion rate.  He also had 6 TDs and 1 INT on this route.  Vick was 6 for 14 for 226 yards, 1 TD and a 42.9% completion rate.  Not all of these passes went to Jackson, but Jackson did run go routes 36% of the time when he lined up outside.  Here is a more complete look at the routes he ran last season, and I suggest reading another PFF article breaking down all of Jackson's numbers from last season. Expect Griffin's numbers to get better on the Go routes this year, and look for defenses to play the Skins differently now that they have a legitimate deep threat. 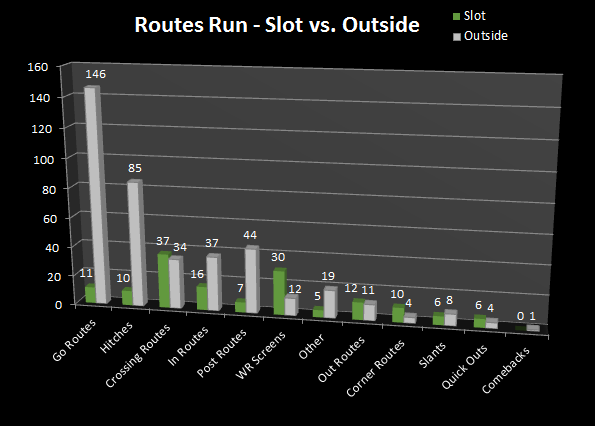 Jackson ran the Go route almost 160 times last year, but was only targeted 21 times with 6 receptions for 227 yards.  He ran the Crossing route around 70 times with 22 targets for 305 yards(Note: the updated numbers from PFF credit him with 273 yards for crossing routes.) 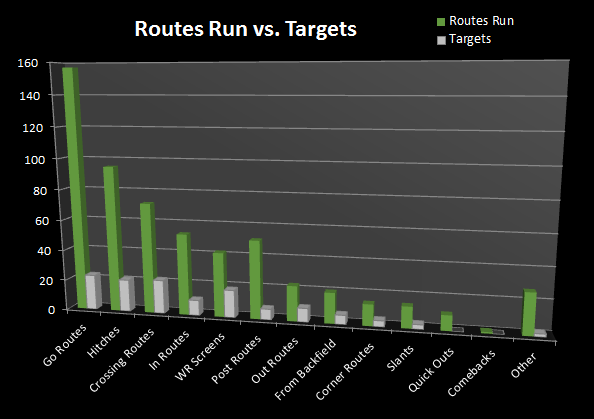 What does this mean for the Redskins' offense this season?  The offense has obviously improved with the addition of DeSean Jackson.  Jackson is not going to repeat the numbers he had last year in Philly when he was working with Riley Cooper and Jason Avant.  Jackson will demand coverage deep and hopefully allow Garcon, Roberts, and Reed to get their opportunities.  Aldrick Robinson's speed might not save him this year if he doesn't improve his route running and his hands.  Gruden will have to play to Jackson's strength's to maximize his skills in his offense.  Jackson can be contained and limited with press coverage, so the other 3 prime targets will have to get open when the defense focuses on him.  Pierre Garcon will have less catches this season, but he will be a major beneficiary of Jackson replacing Josh Morgan/Leonard Hankerson.  No matter how this season turns out, it should be a fun one to watch.