An All-22 look at the DeSean Jackson/DeAngelo Hall match-up from Week 1 (Part 1).

I posted this one twitter last week as an ode to the rivalry throughout the years between DeSean Jackson and DeAngelo Hall. I was surprised to see this as the general reaction from the fans:

Last year was DeAngelo Hall's best year in a Redskins jersey and possibly in an NFL jersey. When I stated that, I was hit with a lot of "DeSean Jackson had 7 catches 104 yards 1 TD against DeAngelo Hall just in Week 1. Case closed." Let's take a closer look: 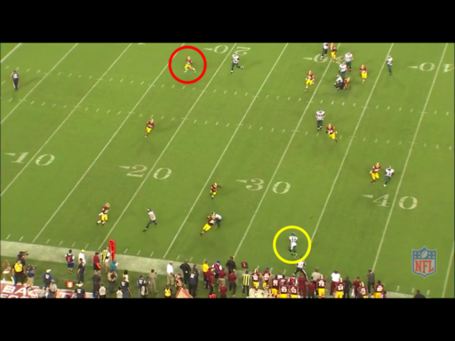 --. Michael Vick dumps the ball off to DeSean Jackson here for a gain of 5 yards. It gets called back on an offensive penalty anyway but notice where DeAngelo Hall is. . . .the other side of the field. Play doesn't count regardless. 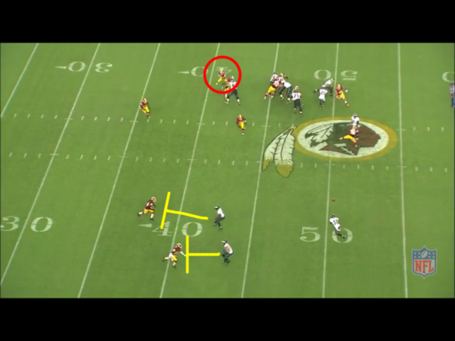 1. DeSean Jackson catches a bubble screen here and takes it for 16 yards. DeAngelo Hall isn't even covering him on this play. He's on the opposite side of the field. 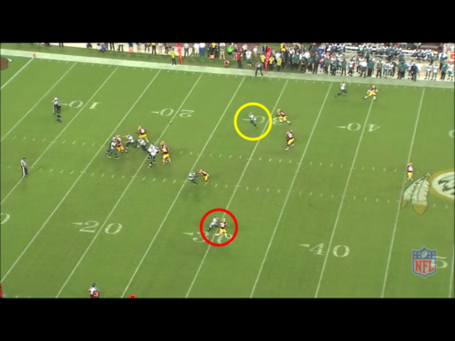 2. DeSean Jackson catches a short hitch route for 5 yards here. DeAngelo Hall is on the opposite side of the field covering Riley Cooper. 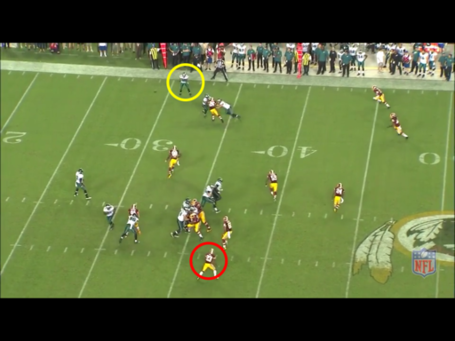 3. Eagles run a trips alley screen with DeSean Jackson on the outside. He takes this for 6 yards. DeAngelo Hall is on the opposite side of the field. 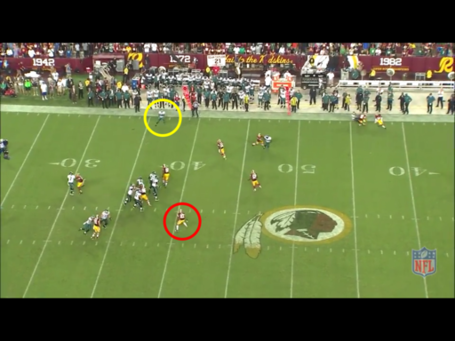 4. So on the very next play from the one above, Chip Kelly runs a Fake Alley Screen Slot Go. I don't know if this is just terrible play-calling or that our defense was so bad he thought it would work. Alley screen, then fake alley screen. Either way. Redskins cover the fly route and leave DeSean alone to catch the dump off pass. This time he takes it for 12 yards. Again, Hall isn't covering him. 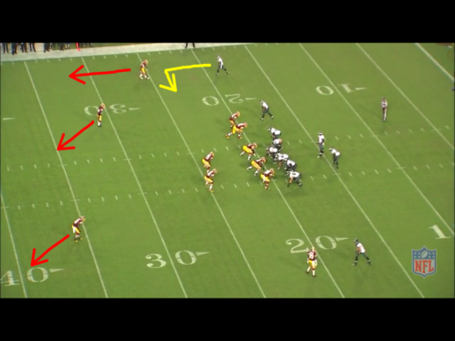 5. Finally, we get to a play where Jackson is targeted on DeAngelo Hall's side of the field. Jackson is running a little in/curl route while Redskins are running a Cover 3 Cloud. Hall is playing bail technique. 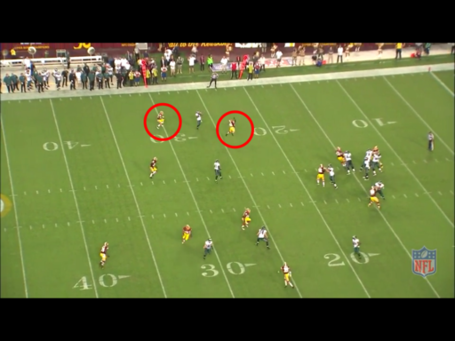 Jackson actually catches this in Josh Wilson's zone (right past his outstretched hands) but I'm going to hold Hall just as accountable on this play. Why? 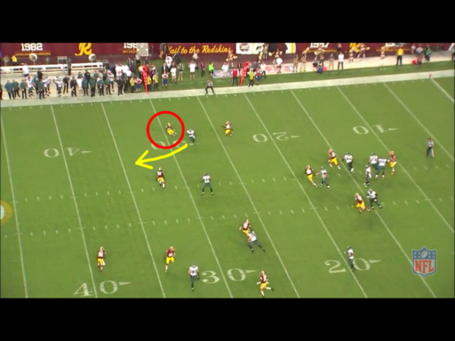 Hall takes a bad angle coming up on the play and Jackson is able to break to the middle of the field because of it. 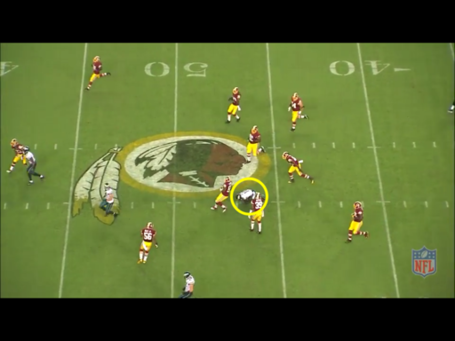 Jackson's speed gets him all the way to mid-field. That is a 26 yard gain after a 5 yard route. Hall could have stopped that with a better pursuit angle. It's frustrating to know how much YAC he just got. . . . . .until you remember he plays for us now. Then, it's awesome. 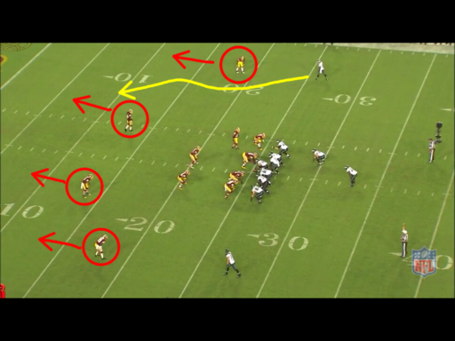 6. DeSean Jackson is on Hall's side again. Jackson is running a post route while the Redskins are in a Cover 4. 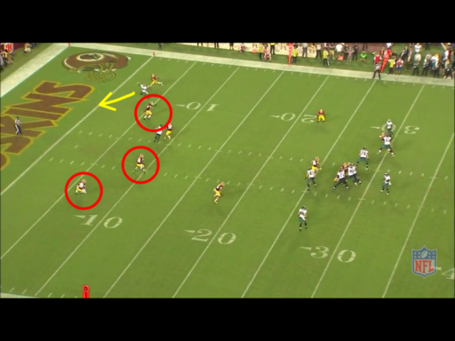 Hall keeps him covered throughout his zone and passes him off to the next zone. Only problem, none of the other three defenders notice the deep route. Hall sees this and tries to get back into the play. 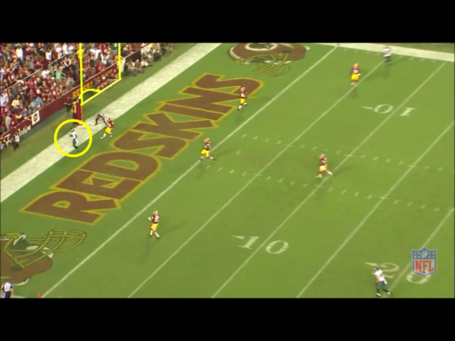 The only reason Hall is even in the vicinity of Jackson is because he was trying to cover for the other player's mistake. He caught it in Bacarri Rambo's zone so technically it's his fault but Vick could have hit him in E.J. Biggers' zone as well. Regardless, this 25 yard TD pass isn't on Hall. 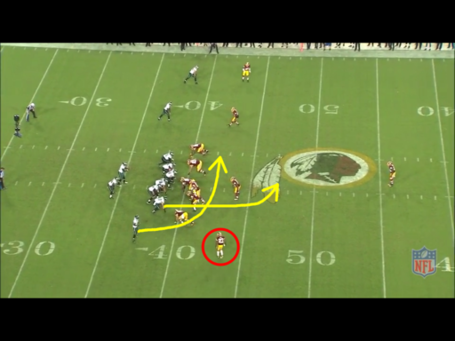 7. Jackson's 7th and final catch comes against DeAngelo Hall in man coverage. The Eagles motion DeSean Jackson in tight to the formation and Hall is forced to back off. Jackson only running a drag route. 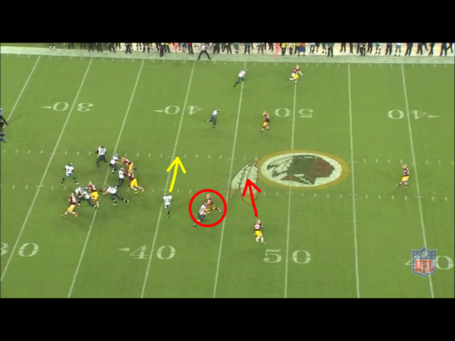 The route by the TE causes a natural pick play and Hall is forced to go around him creating more separation from Jackson. 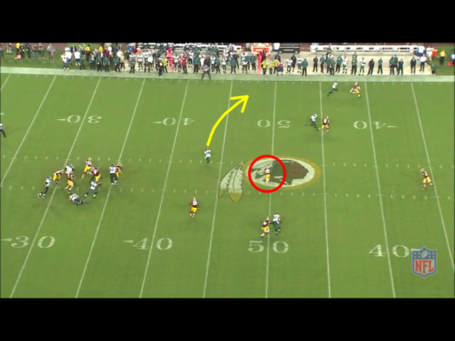 Jackson catches the ball here and look how far away Hall is now (combo of pick route and motion inside by Jackson). 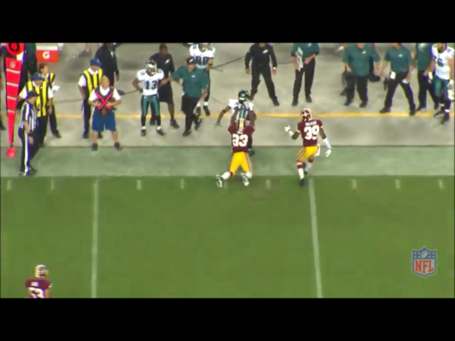 Whether it was the pick play that allowed Jackson to get open or the pure frustration of being manhandled by the Eagles, DeAngelo Hall takes DeSean Jackson down with a horse collar tackle. This 14 yard reception is on Hall because he had Jackson in man coverage even though the pick play caused an obvious disadvantage.

The Eagles moved DeSean Jackson to the trips side of the field a lot because they know DeAngelo Hall wouldn't follow to cover him in the slot and thats where Jackson did most of his damage. If you do the math, out of the 7 catches for 104 yards 1 TD, only 2 catches for 40 yards 0 TDs came against Hall (and that's being harsh considering one play was a catch in Josh Wilson's zone and the other was an obvious pick play). Later this week, I'll show you how the match-up looked the rest of the game.