An All-22 film breakdown of what Keenan Robinson can do for the Redskins.

This week we've been taking a look at ILB Keenan Robinson and what he brings to the Redskins defense. If you missed Part 1, you can find it HERE. In review, Robinson had been keeping Jason Witten of the Dallas Cowboys in check. Continuing where we left off: 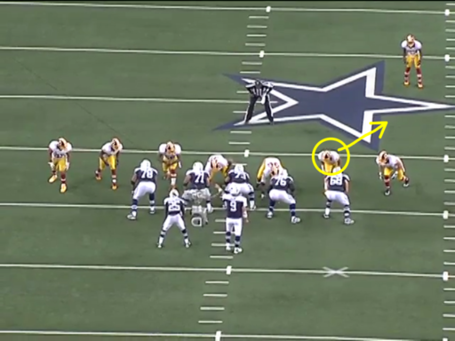 #6. Here is Keenan Robinson showing blitz again. He'll actually be dropping into coverage on Jason Witten again (out of the screen) on a hitch route (something we saw a lot of in the last film breakdown). 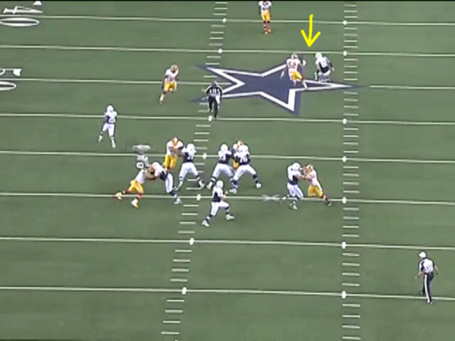 Same route. Same result. Keenan is able to close gap between himself and Witten then sinks hips and turns with Witten on the break. 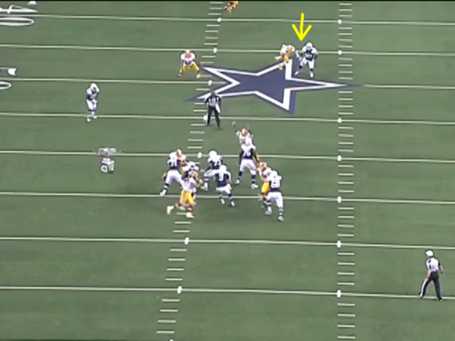 There is a little window to throw into but the pass would have been contested. Robinson is right there. 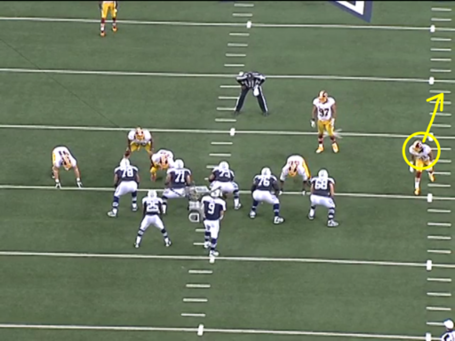 #7. Due to Robinson taking away Witten in the pass game, here is an adjustment the Cowboys made. Witten runs a hitch and out. Robinson is lined up at OLB. 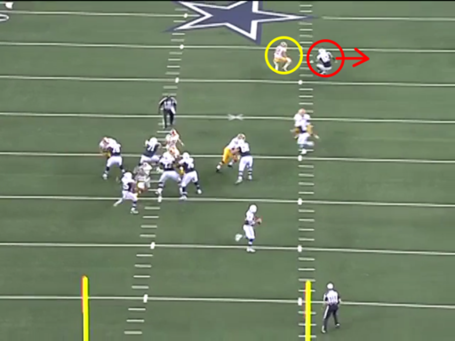 Witten makes the break on the hitch route and Robinson mirrors like all of the other ones but as Robinson breaks back towards the ball, Witten breaks outside. 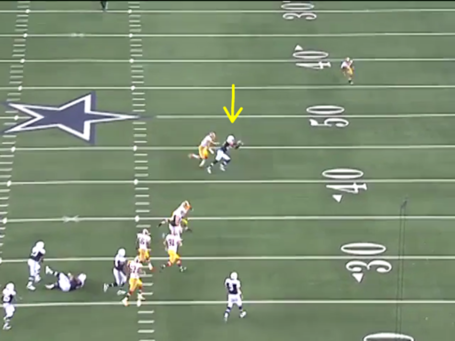 Robinson actually keeps decent coverage for someone who bit on initial move but it created enough separation for Tony Romo to fit the ball in to Witten. 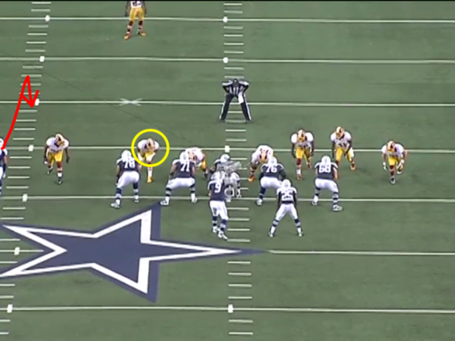 #8. Here is Robinson lined up inside, who bails and covers Witten on the hitch route (something he has done numerous times before). 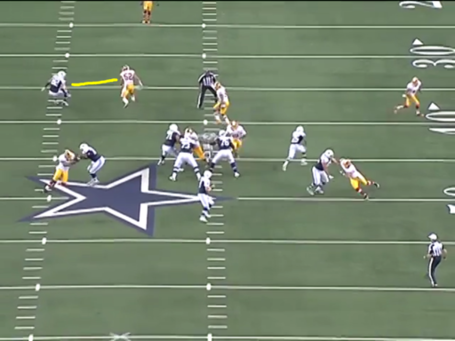 Robinson manages to lose track of Witten a little bit as he bails which leaves some separation. 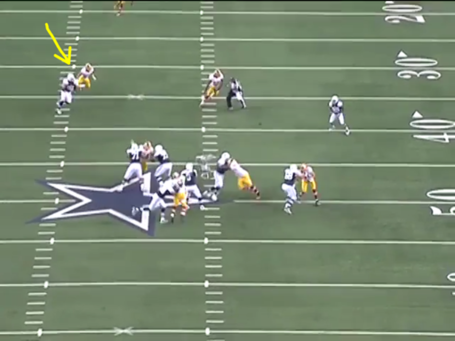 Robinson over runs route, which leaves Witten open on the play.

Aside from the last two plays, Keenan Robinson did an excellent job of taking Jason Witten, one of the top TEs in the NFL, out of the game. Now that we've seen his athleticism and coverage ability, can he provide more for the Redskins defense? 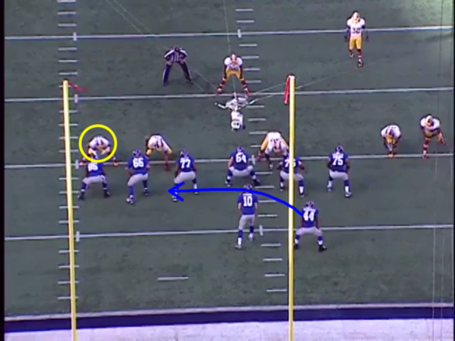 #9. Here is Keenan Robinson vs. Giants. Ahmad Bradshaw is running a shotgun sweep and Robinson is on the outside lined up over the TE. 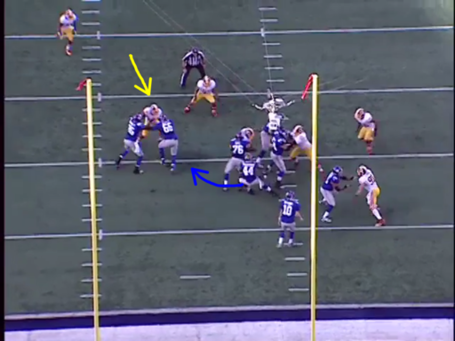 Robinson is doubled by the TE and the LT as Bradshaw starts breaking outside. 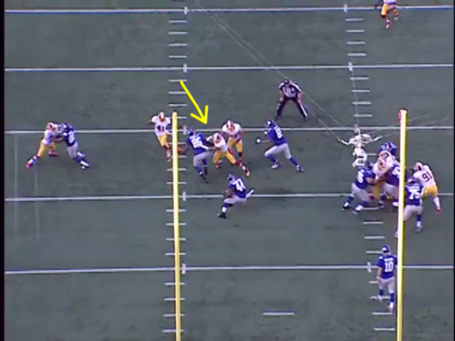 Robinson is actually able to split the double team. 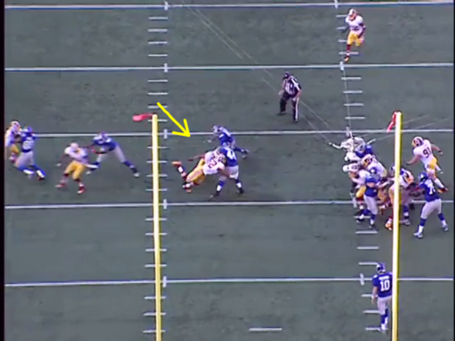 Robinson is then able to wrap up Bradshaw and take him to the ground for a short gain.

By no means am I calling Keenan Robinson a beast in the run game as it is hard to find him actually defending against the run game (he was subbed-in in almost strictly passing situations), and it was one of the knocks on him coming out of college, but as you can see above the potential is there for him to play and improve. 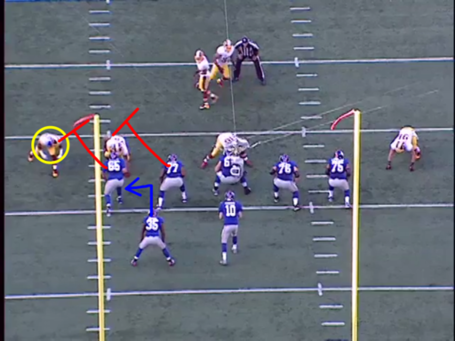 #10. From the same game, here is Keenan Robinson lined up on the outside with a screen pass coming right at him. 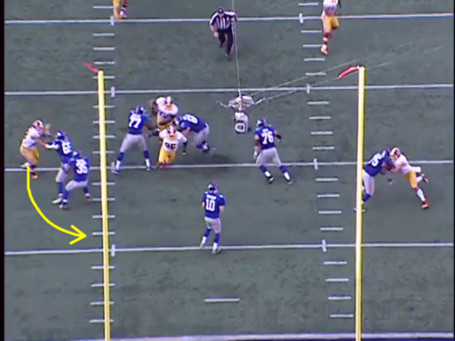 Keenan makes a move upfield on the LT and the LT lets him go. 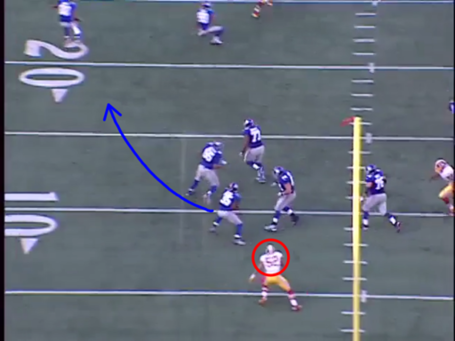 Eli Manning drops the screen pass in right behind Robinson. 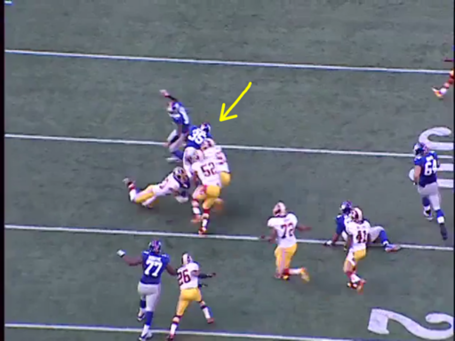 The RB gets a huge chunk of yards on the play but it's good to see Keenan Robinson not give up and become a factor in the ending tackle.

This was just a young player mistake. With more reps, he can better prepare for situations like the one above. Unfortunately, that is a good segue to the elephant in the room. You can't get reps and improve if you can't stay on the field. Two season ending injuries has certainly left Keenan Robinson behind the 8-ball. As you can see from the past two breakdowns, I've had to reach a few years in the past to even get film on Robinson (hence the reason it is not in HD). From the breakdowns though, he has shown the potential to be a factor in this defense going forward if he can remain healthy. "Potential" is the keyword being that it has always been attached to Robinson. When he was recruited to Texas, it was said that he had a lot of "potential" to become a big-time player. Scouts were disappointed with the way he developed (or lack thereof) in college, which made him drop to the 4th round where the Redskins were able to pick him. "Potential" can quickly become "unfulfilled potential." Bottom line, the way the coaches talk, it almost sounds like his position in the line-up is more solid than Perry Riley's. 2014 will be his year to sink or swim. 2014 will be the year we find out the answer to: "Who is Keenan Robinson?"