An All-22 film look at Jason Hatcher's sacks within the NFC East last year.

If you're late to the party, we're counting down Jason Hatcher's best sacks on his NFC East tour of destruction last year. 8 out of 11 of his sacks came within the division in 2013. If you missed 8 through 5, you can find it here NFC B-EAST. Now continuing the rankings: 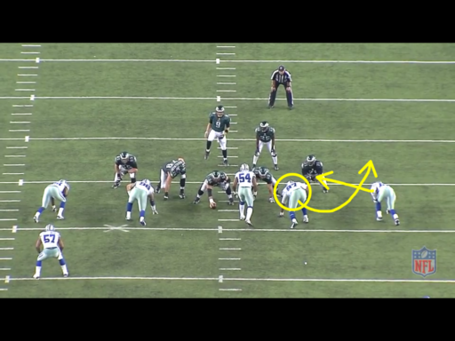 The Cowboys are running a double stunt here. Jason Hatcher is stunting with DeMarcus Ware. 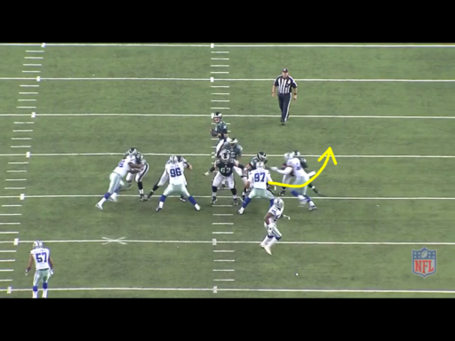 Hatcher does a good job of waiting until the last second to cut off of Ware's backside. 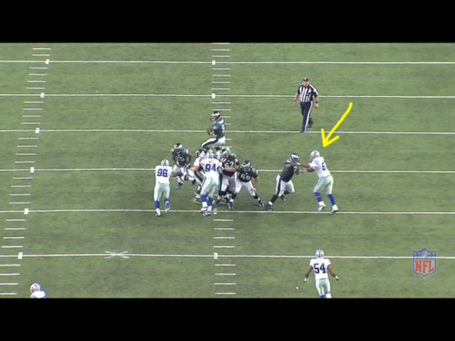 Jason Peters, one of the best LTs in the NFL, picks up Hatcher on the stunt but Hatcher does an excellent job of VIOLENTLY knocking Peters' hands off of him. 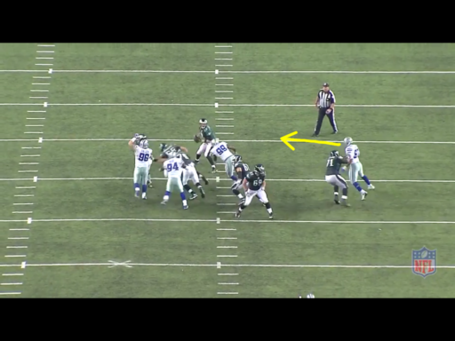 Because of that hand move, Peters loses leverage on Hatcher and he is able to bend the edge. Interior pressure causes Nick Foles to back up in the pocket. 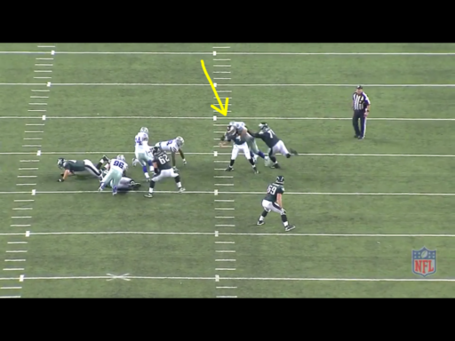 Hatcher strikes Foles from behind and forces a fumble during the sack. Demarcus Ware recovers. This play displayed Hatcher's athleticism to get outside and beat one of the top LTs in the NFL. 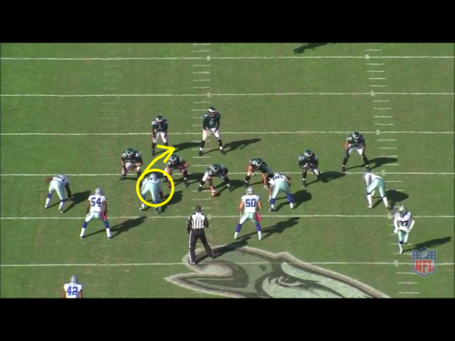 Jason Hatcher is lined up in the B-Gap and is attacking the B-Gap here. Todd Herremans draws the blocking assignment. 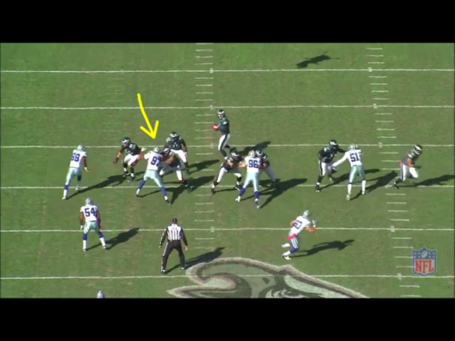 Hatcher does his hard juke step to the inside towards the A-Gap then cuts back towards the B-Gap, this causes Herremans to get set a little late and allows Hatcher to get into his pads. Hatcher uses that to display his strength and push off of the OG. 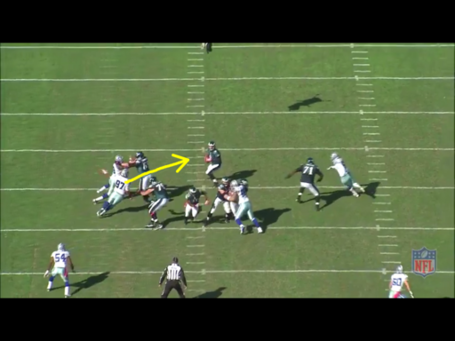 Look at the separation that Hatcher created. Not only that, but look at the way Hatcher now bends the edge at 300 lbs. 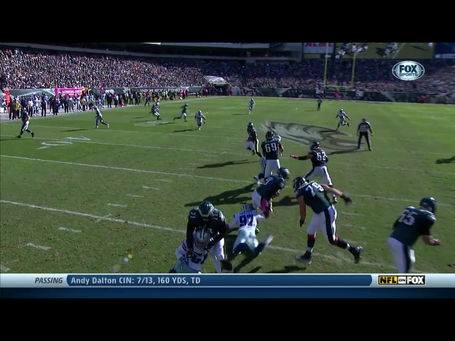 Hatcher gets a hold of Foles and brings him down for the sack. This play again displays Hatcher's power at the point of attack, the separation caused from that burst gave Hatcher all the room he needed to make the play. In addition to that, he did a good job setting up his move and bending the edge when he needed. 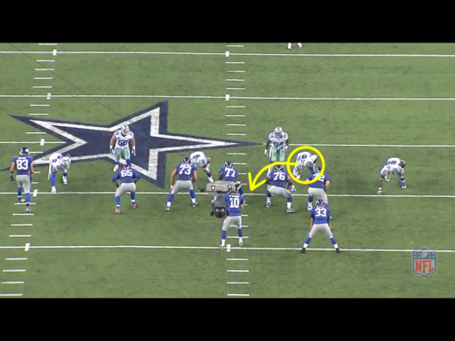 Here Hatcher lines up in the B-Gap but is attacking the A-Gap. 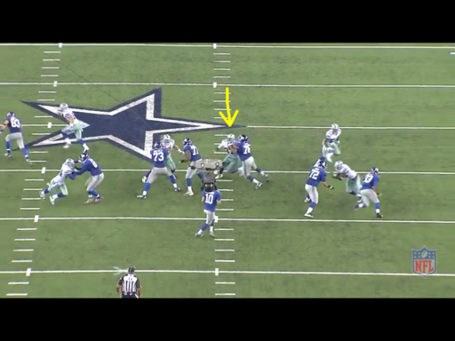 Right off the snap, Chris Snee steps out trying to close the B-Gap as Hatcher takes a quick first step inside. Snee loses leverage immediately. 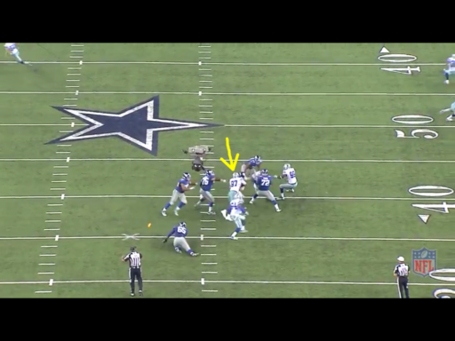 Snee gets his arm up around Hatcher's neck but Hatcher is able fight through it. He gets the sack on Eli Manning. . . . .and an offensive holding penalty on Snee. This play displays Hatcher's first step quickness and speed to get from one gap to another. It also shows his toughness to fight through a holding penalty to still get the sack. 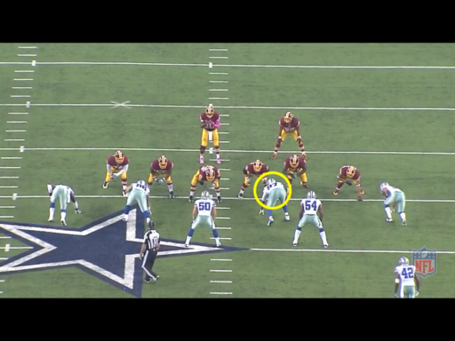 Yes, unfortunately the #1 play came against our beloved Redskins. Hatcher lines up over Kory Lichtensteiger's outside shoulder on this play. 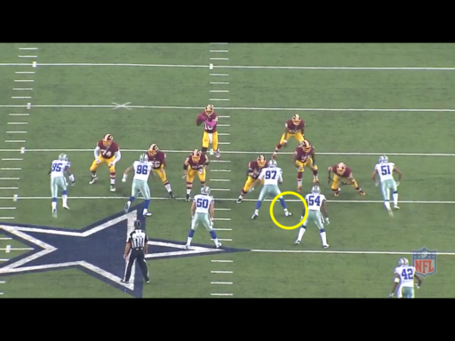 Hatcher comes hard. He takes a hard juke step with his right foot getting Kory L to jump outside. Hatcher then uses his left hand to punch Kory L's pads and force him even further outside as he heads inside. 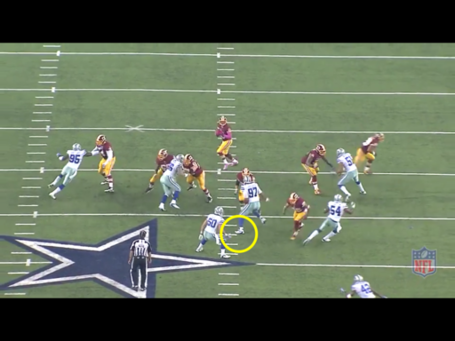 Kory L recovers, and pulls himself back inside just in time for Hatcher to do the exact opposite move. Hatcher takes a hard juke step with his left foot, getting Lichtensteiger to commit inside as Hatcher uses his right hand to push Kory L all the way inside as Hatcher heads to the outside. 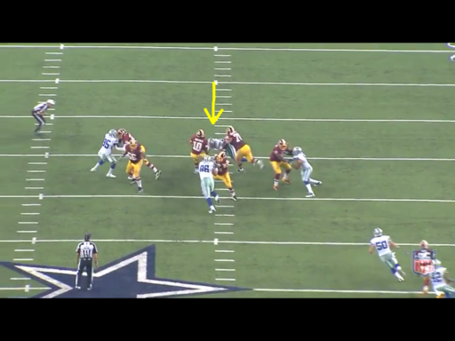 This time, Kory L can't recover and Hatcher has a clear path to Robert Griffin III. RG3 is actually able to spin out of Hatcher's grasp. 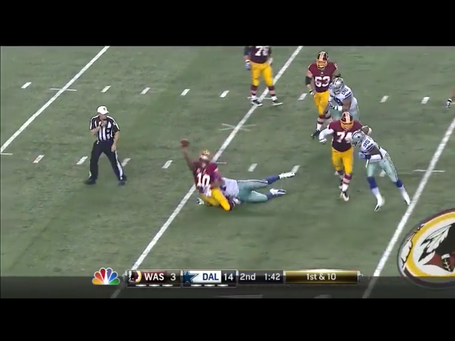 Hatcher doesn't give up though and is able to chase down RG3 from behind. This is my favorite play because Hatcher looked like he was playing with his little brother (save the Lichtensteiger jokes). The fact of the matter is, Lichtensteiger was in the lineup based purely on his athleticism and Hatcher was able to match it, if not top it, and mix in his power to cause an even greater advantage. When RG3 escapes, Hatcher's motor and relentlessness comes into play as he chases down the quarterback.

In these clips, Jason Hatcher displays power, explosiveness, quick/light feet, and athleticism. The monkey in the room, of course, is his age and size of contract. The Redskins gave him a handsome contract this past off-season and he is already one of the oldest players on our team. Hatcher says he is all set because he has low mileage but as we all know, age is age and it waits for no one. Will it wait long enough for us to get a good return on our investment?