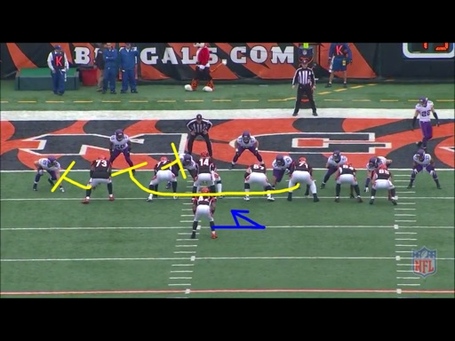 #1. 2nd and Goal. The Bengals run a Counter Trap play here. They use RT Andre Smith as the "trap blocker" who will lead through and block the LB who thinks he is chasing the play. 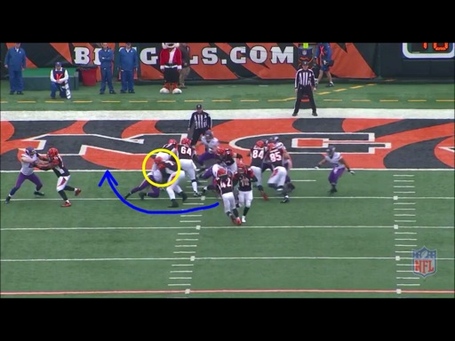 As you can see, the LB has nothing to do but crumble under Andre Smith's block because he didn't see it coming until the last second (I hope Tyler Polumbus and Morgan Moses are paying attention). That opens a hole for Benjarvis Green-Ellis to run through. 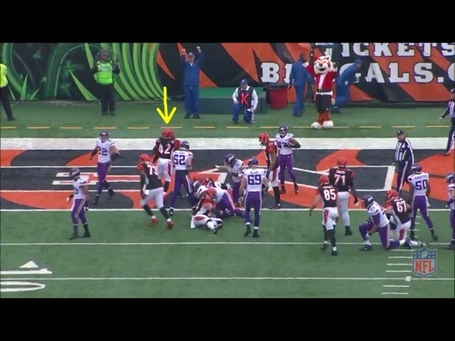 Green Ellis is able to weave himself through a little more traffic to get into the end zone for the touchdown. 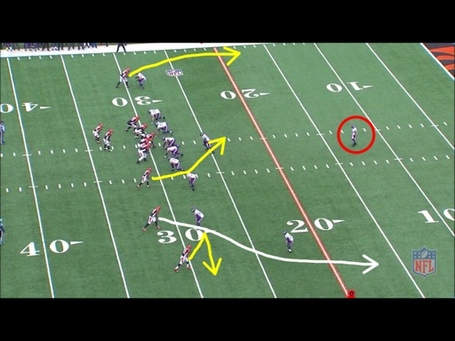 #2. 2nd and 8. Vikings are playing a Cover 1 man. Andy Dalton is going to take A.J. Green on the fade route from the slot if the safety doesn't shade over him (which he should). 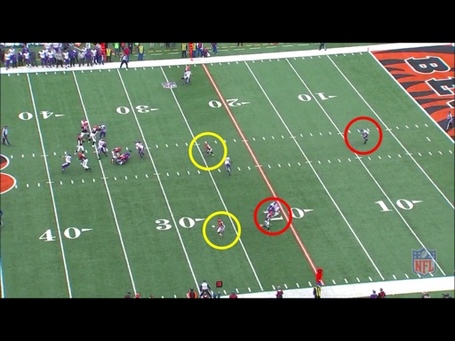 Instead, the safety drops straight back. Dalton has two underneath WRs open (yellow circles) but he wants to take his shot. Because of the depth that the CBs played at, the route combination at the bottom manages to become a pick play. 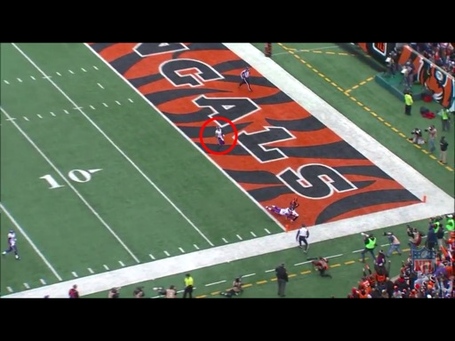 That pick gives AJ Green an extra step of separation from the CB and gives Dalton a bigger window. Dalton drops the ball in the bucket over his shoulder for the touchdown. The free safety is no where close to the play. 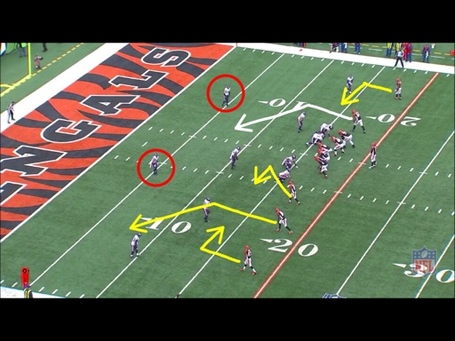 #3. 3rd and 10. Here is an easy play for the QB. There are five routes and 2 of them are deep. The target of the pass is dictated by the coverage. The Vikings are showing a Cover 2 here. If they stay in this Cover 2 and split the field, you take the post in the middle. If this is a disguise and they shift to a Cover 1, you take the Corner route. If the CBs bail into a Cover 3, you have three short routes to choose from. 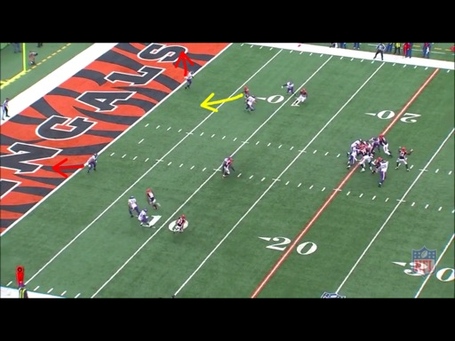 Minnesota stays in the Cover 2 and the safeties split. That opens up the middle of the field where Jermaine Gresham is headed on the post route. 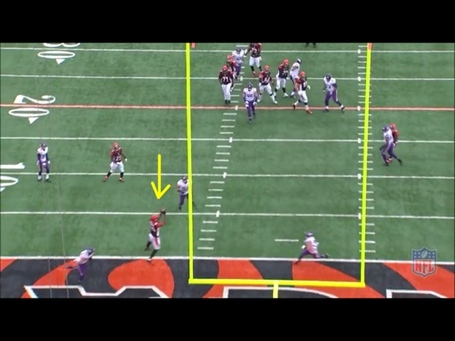 Gresham has an easy, uncontested catch in the end zone. 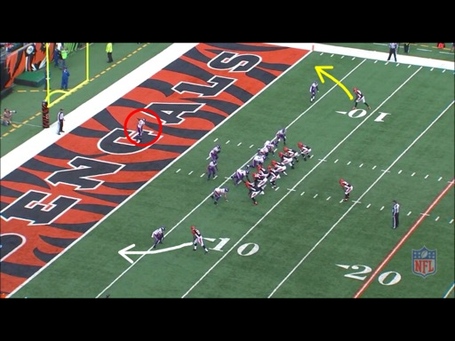 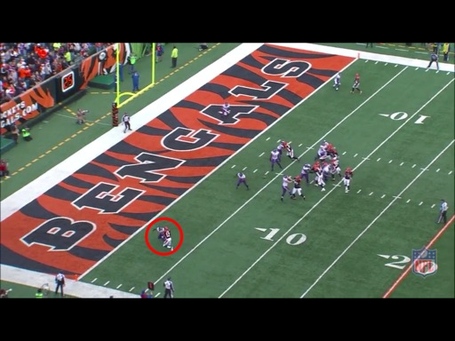 The FS shades AJ Green at the top of the screen so Dalton goes to Mohamed Sanu at the bottom. On a fade route, if the WR beats the CB off the line of scrimmage, you toss it to the back of the end zone where only your guy can get it. If the CB stays over top of the WR then you go with the back shoulder throw. The CB stays over top of Sanu but turns his back to Dalton. That alerts both Dalton and Sanu to a back shoulder throw. 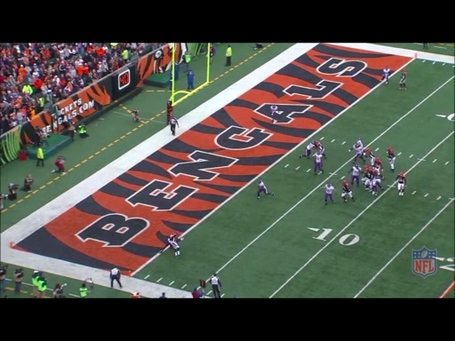 Dalton delivers the ball before the CB can even see it's coming, Sanu does a good job using his body to box out the defender, he makes the catch and lands in the end zone. 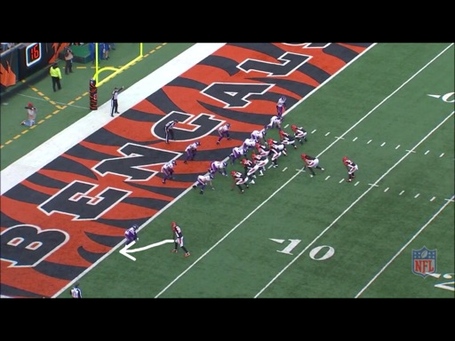 #5. 2nd and Goal. Bengals do nearly the same thing as the previous TD but with 22 personnel this time. AJ Green is split out wide to the bottom of the screen in a 1-on-1 situation. 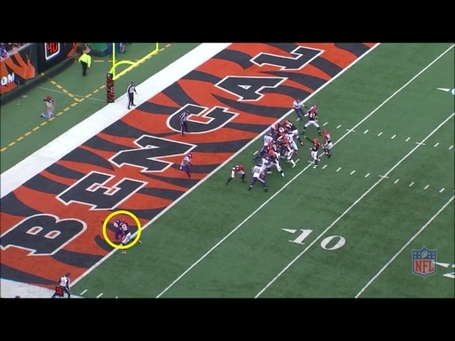 Dalton sees the one on one and throws the jump ball. The CB is grabbing all over Green. 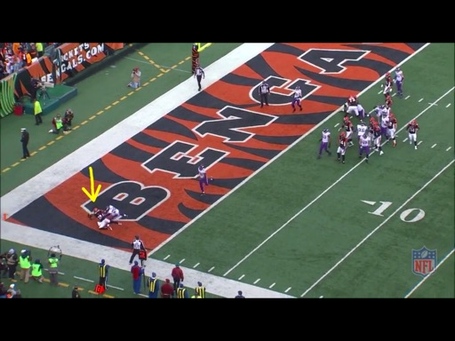 Despite the defensive pass interference, AJ Green is able to make the one handed catch as he falls to the ground.

It's much more fun to take a look at these breakdowns knowing what most of our personnel options could be. With that being said, it'll also be interesting to see how Jay Gruden modifies his offense from last year to this year with a different team/different players.