Today, we are taking a look at Redskins free agent pick up, ILB Akeem Jordan. When Jordan was with the Philadelphia Eagles, he was considered a coverage linebacker. With the Kansas City Chiefs, I didn't get to see as much of that because the Chiefs like to move SS Eric Berry down into the box on obvious passing downs to take that spot. Jordan still played plenty of downs and made an impact. Let's take a look: 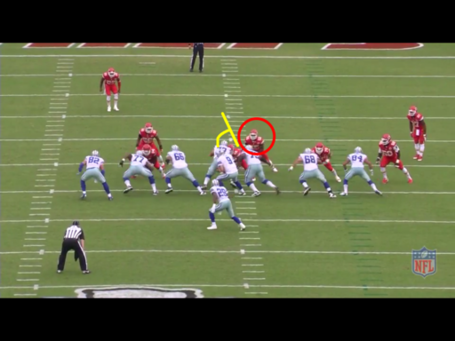 1. Akeem Jordan is lined up over the RG while the Cowboys running play is to the left. The Cowboys center is suppose to help double the NT, then release to the second level and cut off Akeem Jordan's angle. 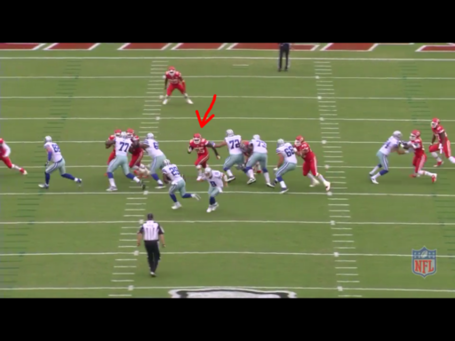 As soon as Akeem Jordan identifies run, he shoots the gap quicker than the center can react. 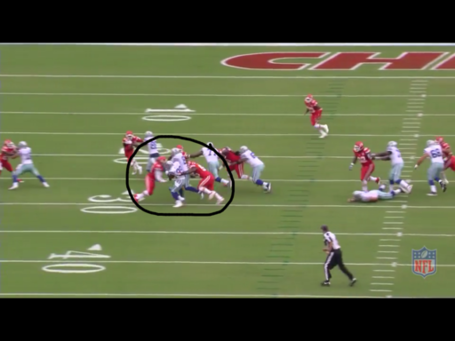 Jordan is able to chase the play down from behind and help make the tackle. 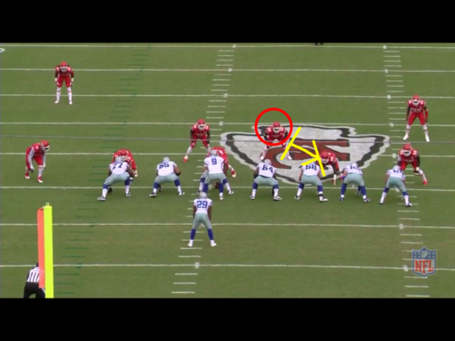 2. The Cowboys are running to the right here. RT Doug Free is suppose to help double the DE and then release to the second level to block Jordan. 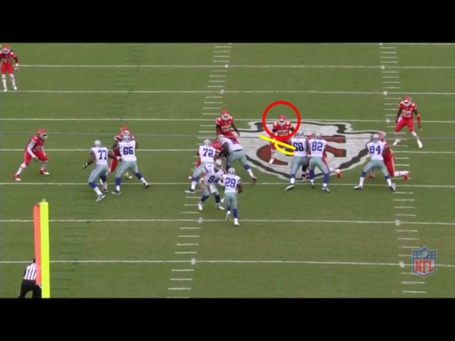 The DE does a good job of holding Doug Free up and Akeem Jordan is able to fill the gap that DeMarco Murray wants to run through. 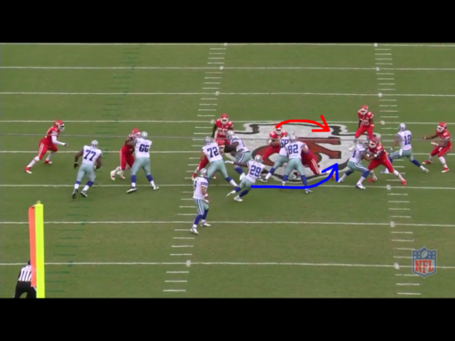 Because of this, DeMarco Murray tries to bounce it outside but Jordan is able to mirror him. 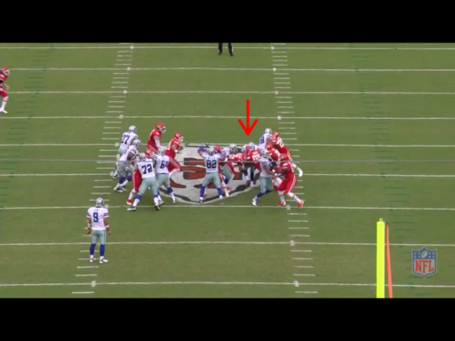 Jordan meets Murray in the next available gap and stops him for a minimal gain. 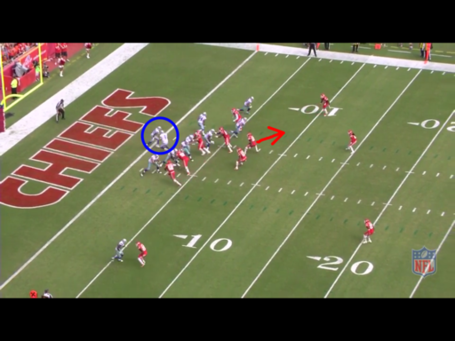 3. Here is a pass play on an early down. Akeem Jordan gets sucked up on the run fake but is able to quickly retreat when he identifies pass. 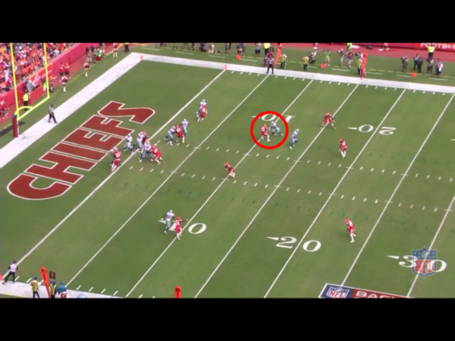 Jordan is able to quickly find Miles Austin trying to run a hitch route in his zone and steps in front of it to cut it off. 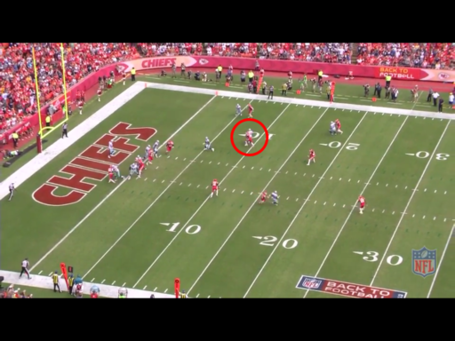 When Jordan cuts off his route, Austin tries to turn his hitch into an out route but Jordan stays in his back pocket. 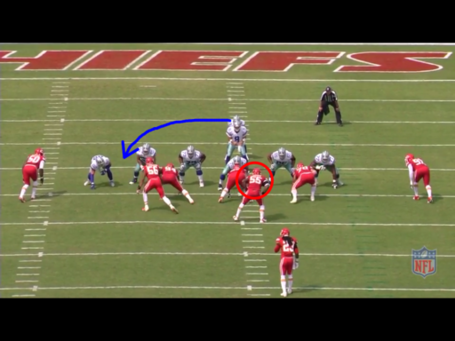 4. Once again, Akeem Jordan is shaded a little to the non-play side. He's walking towards left side of formation while the run play is heading to the right. 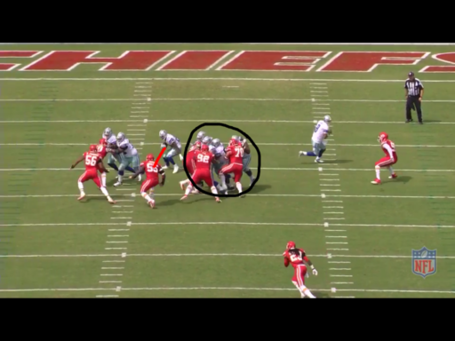 Can we take a second to appreciate how well the Chiefs D-line keeps blockers away from their linebackers? With the Redskins moving to more of a penetrating 1-gap system, Jordan will have to fight off more blocks than this. Jordan is able to fill the gap that DeMarco Murray is trying to run though. 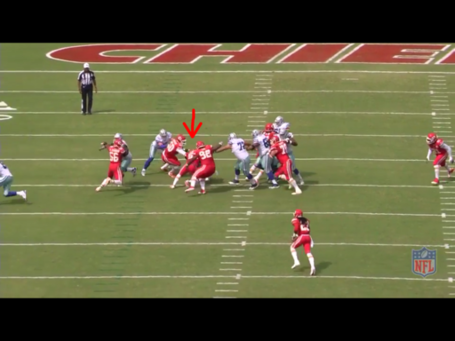 Jordan is able to wrap him up for the solo tackle. 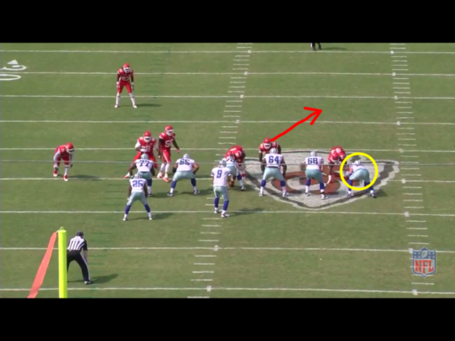 5. Akeem Jordan is going to cover the TE running up the seam on this play. 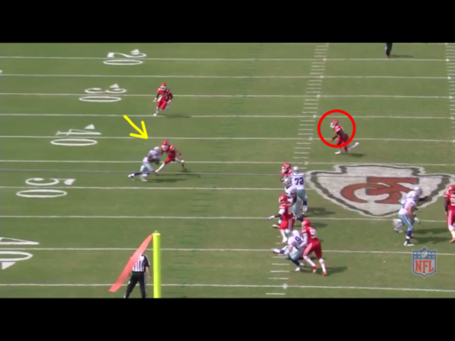 Tony Romo dumps it off to his RB on a check down. He makes a move on the Chiefs defender in coverage. Jordan (red circle) is in pursuit. 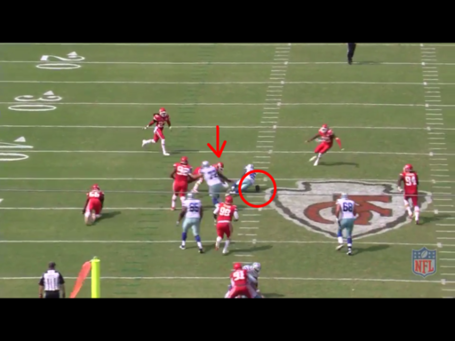 Akeem Jordan is able to hit the ball-carrier and punch the ball out causing a fumble. 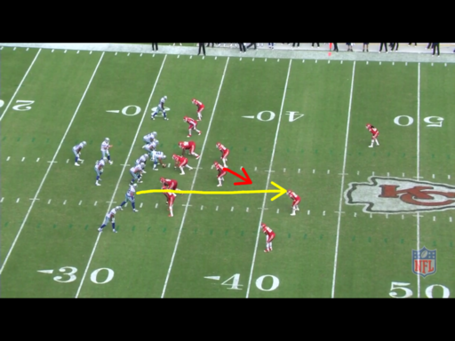 6. On this play, Jordan is in a zone coverage. He is going to ride the TE down the seam. 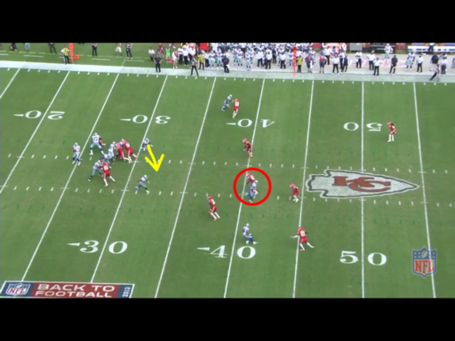 Jordan does a good job taking away the TE and passes him off when he sees DeMarco Murray with a late release into his zone. 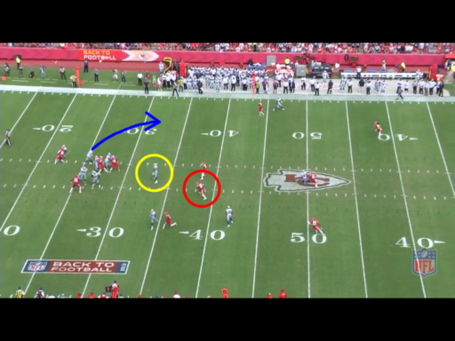 Jordan uses his speed to close the gap between himself and Murray. Romo can't find an open receiver so he begins to scramble left. 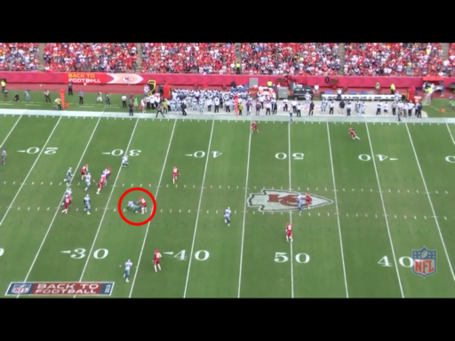 But just in case Romo tries to do one of those miracle Romo things, Jordan runs right through Murray and puts him on the ground to make sure he isn't catching some sideways, across the grain throw. Anyone who puts a Cowboy flat on the turf is okay in my book.

It's clear that the Redskins want Keenan Robinson to seize the starting job next to Perry Riley. It's what they drafted him to do. With his injury history though, you can't rely on him at this point and the Redskins know that. Akeem Jordan is one of three free agent ILBs Washington brought in this season. It's clear that healthy or not, Robinson is going to face some stiff competition in training camp for that starting spot and I expect Jordan to be applying a lot of heat. I will leave you with these images. 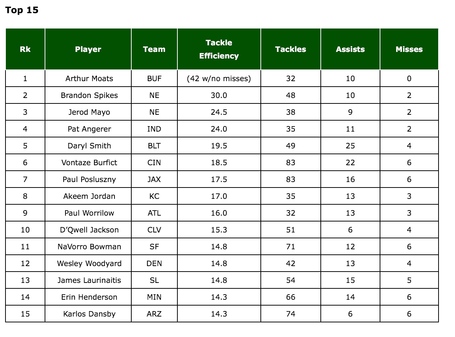 By November, Akeem Jordan was the 8th best linebacker as far as tackling efficiency. London Fletcher was 63rd.

By the end of the season, he was 2nd.