Hazard's Huddle: Getting To Know DeSean Jackson by Attributes

Now that DeSean Jackson has landed in D.C., it's time to look at what he brings to the table.

Share All sharing options for: Hazard's Huddle: Getting To Know DeSean Jackson by Attributes

Umm. . . . . .so much for that exorcism, huh? DeSean Jackson has landed with the Washington Redskins and will be donning the burgundy and gold this year. I refused to even look at film until he signed on the dotted line because until the ink is on the paper, anything can happen. If you were to tell me two weeks ago that I'd be watching the entire Philadelphia Eagles 2013 season, I would have put sugar in your gas tank. In the end, with "D-Jax" officially signing, I spent my weekend doing just that. I typically look at tape with an article idea already in mind. This was different though. I just crunched tape, mapped out plays, and before I knew it, I had so much material and STILL didn't know what I would do with it. Then it hit me: Instead of breaking down the plays, let's break down the player. Here's a look at what we are getting in DeSean Jackson. 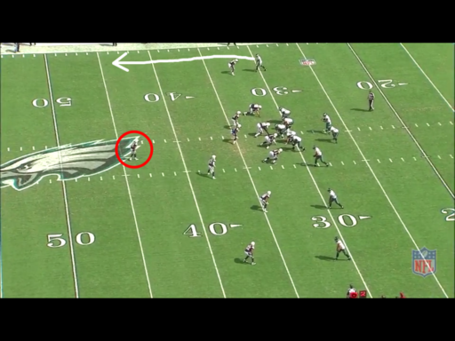 Let's get this out of the way now, shall we? It's no secret that DeSean Jackson is fast. That's why playing a single high safety (Cover 1 or Cover 3) is so dangerous (Note: In order to stop Alfred Morris, teams are going to have to run a single high safety to put an extra man in the box). There are many corners in this league who just can't keep up with him. The Chargers try Cover 1 here. 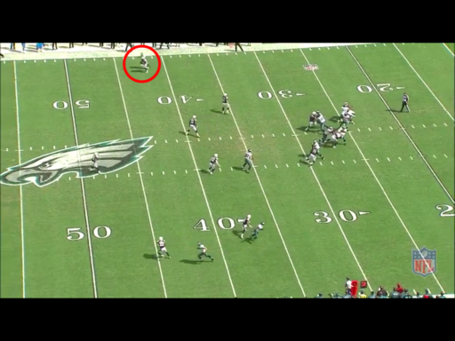 10 yards off the line of scrimmage and D-Jax already has a step on S.Wright as Vick throws the ball. 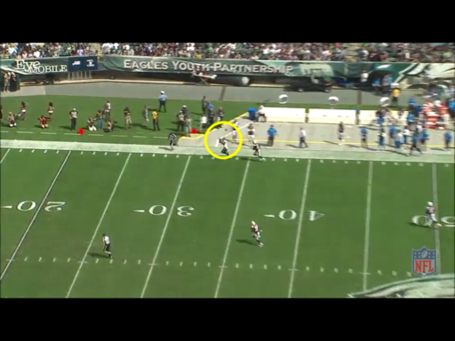 Look at the separation between D-Jax and the CB. Jackson clearly beats his man but unfortunately doesn't get both feet in bounds. This obviously wasn't the only time on tape he burned a CB. 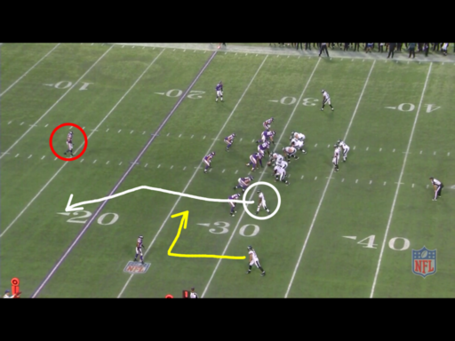 A second gear is the ability to hit the NOS once the ball goes up in the air. It's an elite trait that not everyone possesses. D-Jax has it. 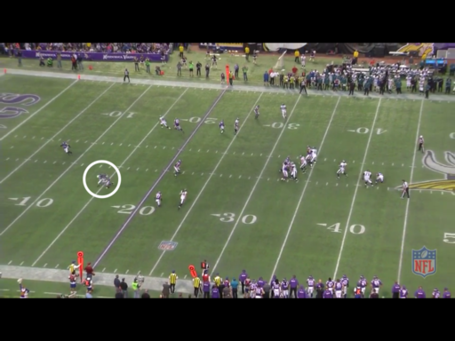 As Nick Foles lets go of the ball, DeSean Jackson is pretty well covered. Well, that's until he sees the ball in the air. 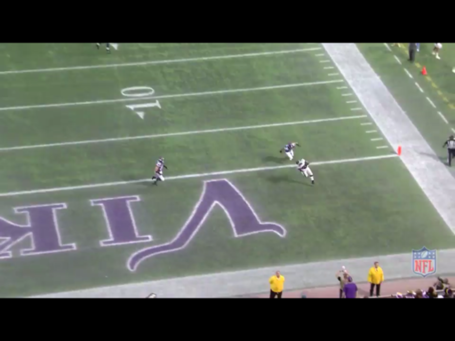 Foles gets some air under the ball and lets D-Jax run under it. Jackson separates himself from the defender and is able to make the catch uncontested. 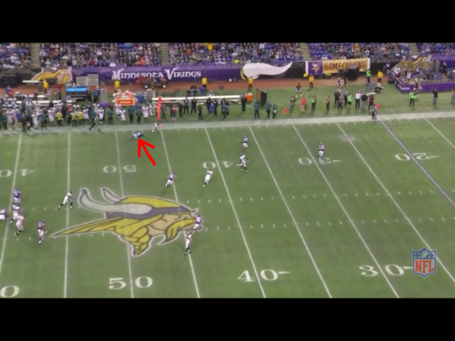 Not only is Jackson fast, but he is lightning quick. This shows up in many facets of his game. Here he catches a short little drag route and makes the trailing defender miss the tackle then heads up-field. 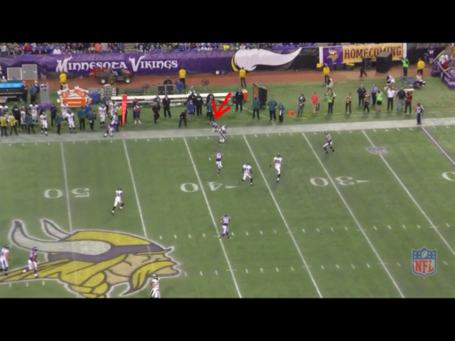 Then he makes another defender miss. . . 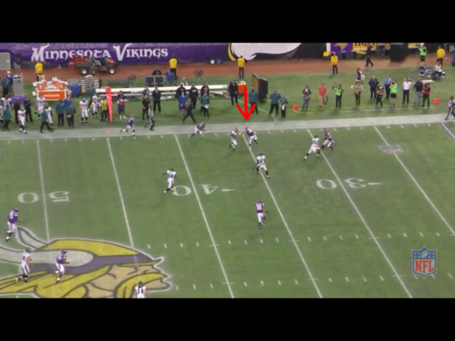 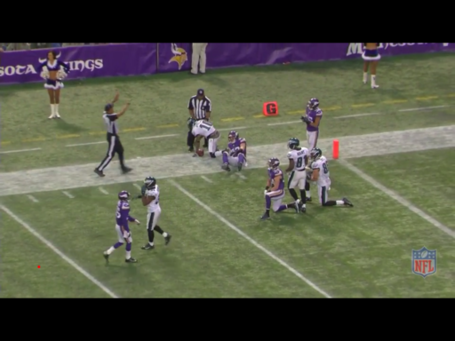 until he is finally brought down near the goal line. His ability to start and stop on a dime is excellent. His ability to put his foot in the dirt, change direction and get back to top speed instantly can't be over-stated. 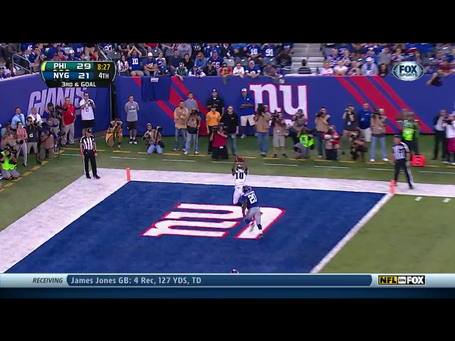 While Jackson is capable of making catches like this. . . . 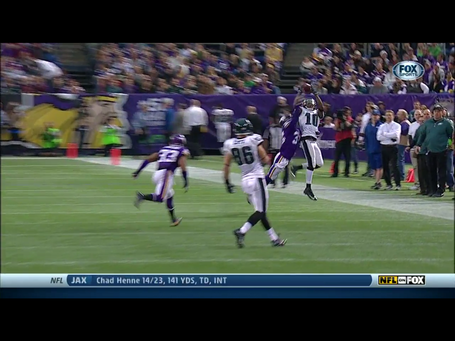 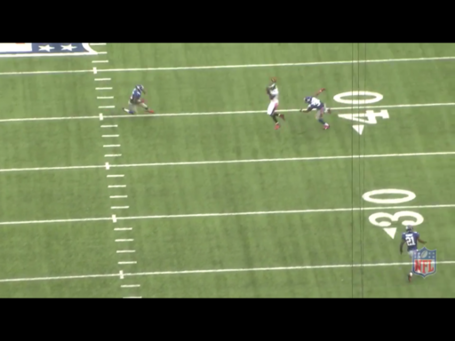 Unfortunately, DeSean Jackson is primarily a body-catcher. In this shot, you can see Jackson is wide open here but because he's trying to pin the ball against his pads, it hits his shoulder and pops up. He is the type who won't turn around and climb the ladder (jump and attack the ball at it's highest point). Instead, he'll try and get the ball to drop into the bucket just over his shoulder. Jackson has made it succeed thus far in his career. He uses his speed to generate separation (radius) so he doesn't have to deal with many contested balls. 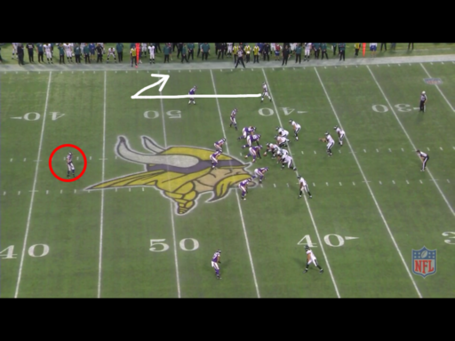 Here is one of those facets where Jackson's quick feet show up again. He is running a deep comeback route. 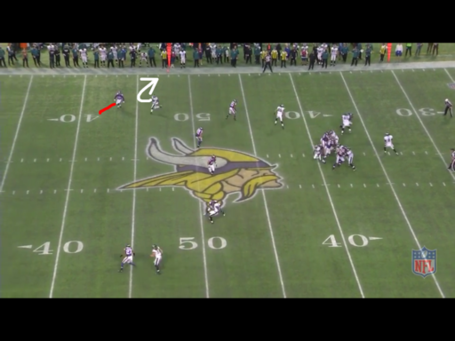 When Jackson runs the deep comeback he likes to sell the post route first but his feet are so quick that he is able to do it without wasting any extra time and the Foles doesn't have to hold the ball longer. 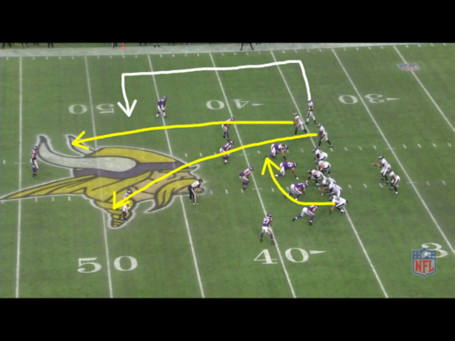 Here Jackson motions out wide and then runs a deep in route. 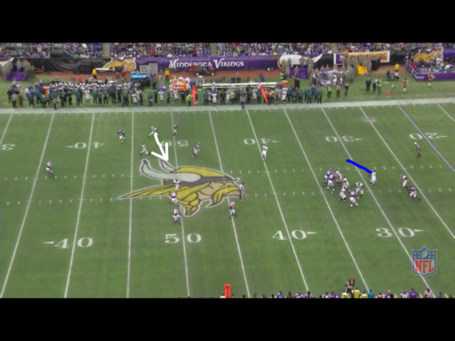 DeSean knows it's zone once he makes his break on the in route. He slows down his route to find the hole in the zone. 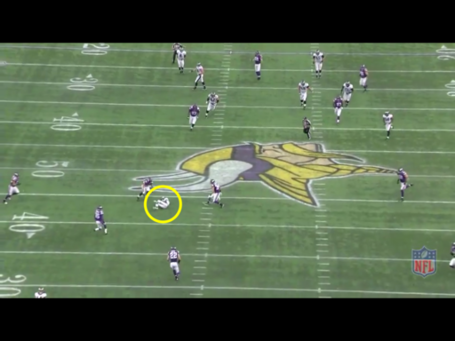 Jackson finds the hole and Foles is able to hit him for a good gain. Jackson can get lazy on routes sometimes and doesn't always run full speed (on fly routes into safety coverage, clear-out routes, etc), but when he wants to turn it on, he can be good. 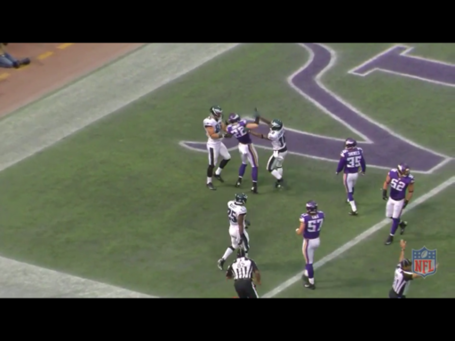 No, I'm not talking about this stuff although you will see it a lot. Jackson will take exception if you bump him after the whistle, lay on him too long or knock him out of bounds. 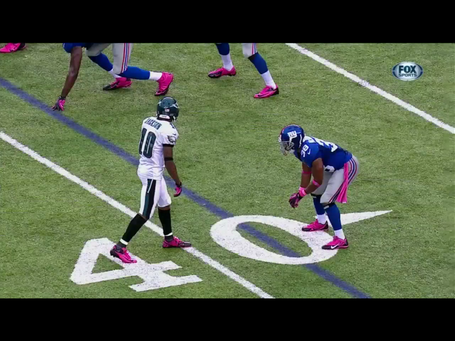 By physicality, I mean how well he does with a CB in his face on the line of scrimmage. 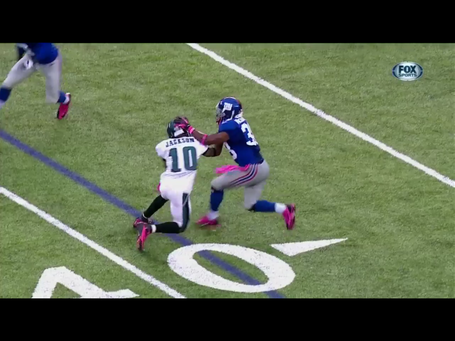 Against McBride, Jackson is able to get low and underneath the jam. 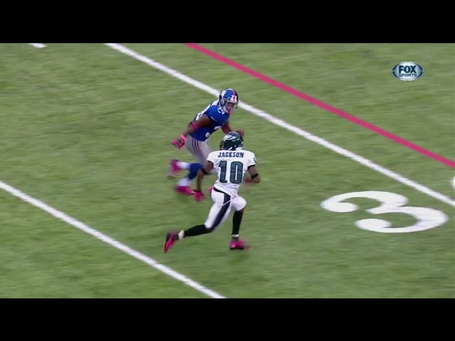 Jackson then gets free up the sideline for a catch. Once again, this isn't exactly the norm. 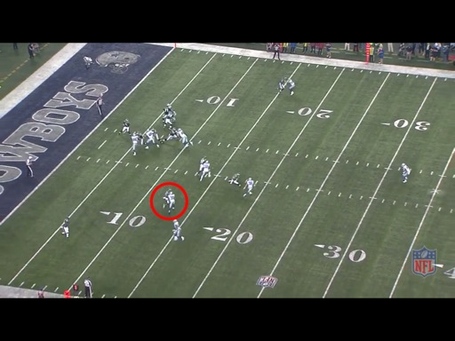 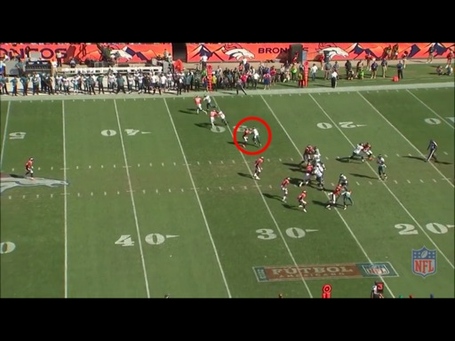 and here. Be warned though, it's hard for some CBs to jam Jackson because of his foot quickness. If you take one false step, over-extend, or lunge at all, Jackson's speed will make you pay. 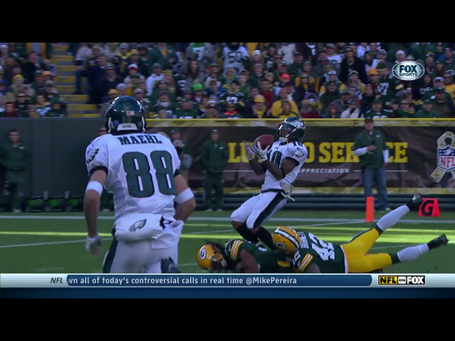 We've all seen the highlight videos, we all know about the punt return that KILLED the New York Giants, etc. Some players just make plays however unconventional they may be. Here Jackson comes down with a pass that TWO Packers should have intercepted and ends up scoring a touchdown. 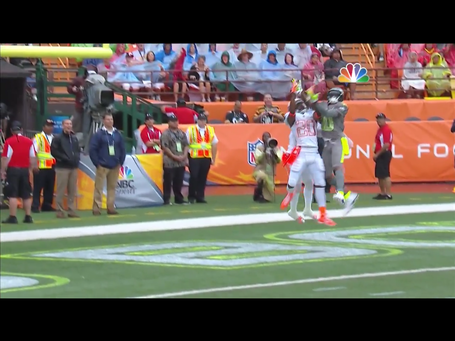 Even in the Pro Bowl, DeSean Jackson manages to pull this flea flicker in for a touchdown in double coverage with a body catch. Like I said, some players just make plays.

While DeSean Jackson does have flaws (on-field), he also brings tons of potential in an offense like this and it's hard not to like this pick-up especially for the price. If teams run two deep safeties, you feed Alfred Morris. If teams stack the box in order to slow down Alfred Morris, you leave the single high safety in a conundrum. Picture this: If you isolate D-Jax on one side of the formation and have a combination of Pierre Garcon, Jordan Reed and Andre Roberts on the other side, where does the safety shade? If he shades over D-Jax, he leaves three players who can beat man coverage and who excel at YAC to catch the ball and pick up blockers along the way. If you shade the three pass catchers side to try and eliminate as many pass catchers as possible, you leave D-Jax in a one on one situation. It should and hopefully will, create problems across the board. 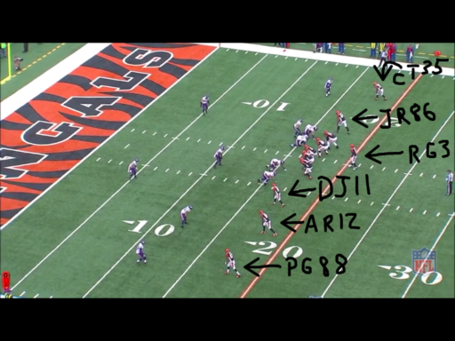 If/when Gruden puts all this speed on the field at once, how do you defend it?