The Redskins get a head start on offseason workouts this week.

The Redskins will be getting a two week head start on the rest of the league when it comes to offseason workouts due to the fact that they have a new Head Coach this season.  The rest of the teams without new coaches will be starting their programs on April 21st.  Jay Gruden will be meeting a number of his players for the first time during these workouts, while others have been working out at Redskins Park on their own.

This week's workouts are voluntary and will mainly focus on strength and conditioning, and no positional coaches will be allowed on the field.  Quarterbacks can throw to receivers as long as there are no defenders covering them.  DeSean Jackson is currently vacationing outside of the US, and it is doubtful that he will be working out with the team tomorrow.

Head Coach Jay Gruden is obviously eager to get started and see his new QBs in action, but it will be very limited this week.

"First of all, I’d like to just see Robert in action and [backup quarterback] Kirk [Cousins] and [wide receiver] Pierre [Garcon] and [tight end] Jordan Reed and our offensive line and come up with my own conclusion other than based on what I’ve seen on tape," Gruden said two weeks ago at league meetings in Orlando, before the team added Pro Bowl wide receiver DeSean Jackson through free agency. "I think these [offseason practices] are going to be very important to see where we’re at and where we need to improve and where we need to go."

According to the Article 21, Section 2 of the NFL CBA, there are 3 Phases to the offseason workout program.

i) Phase One. Phase One shall consist of the first two weeks of the Club's offseason workout program. Subject to the additional rules set forth in Section 5 of this Article, Phase One activities shall be limited to strength and conditioning and physical rehabilitation only. During Phase One, only full-time or part-time strength and condi­tioning coaches, who have no other coaching responsibilities with the Club, shall be allowed on the field; no other coaches shall be allowed on the field or to otherwise par­ticipate in or observe activities. No footballs shall be permitted to be used (only "dead ball" activities), except that quarterbacks may elect to throw to receivers provided they are not covered by any other player. Players cannot wear helmets during Phase One.

(ii) Phase Two. Phase Two shall consist of the next three weeks of the Club's offseason workout program. Subject to the additional rules set forth in Section 5 of this Article, during Phase Two all coaches shall be allowed on the field. On-field wor­kouts may include individual player instruction and drills, as well as "perfect play" drills (e.g., offense or defense only, but not offense vs. defense), or special teams drills on a "separates" basis (e.g .. , kicking team or return team only, but not kicking team vs. return team). No live contact or team offense vs. team defense drills are permitted. No offense vs. defense drills are permitted (e.g .. , no one-on-one offensive linemen vs. defensive linemen pass rush or pass protection drills, no wide receivers vs. defensive backs bump­ and-run drills, and no one-on-one special teams drills involving both offense and defense are permitted.) Players cannot wear helmets during Phase Two.

(iii) Phase Three. Phase Three shall consist of the next four weeks of the Club's offseason workout program. Subject to the additional rules set forth in Subsec­tions 5(a) and 5(c) of this Article and Appendix G to this Agreement, during Phase Three each Club may conduct a total of ten days of organized team practice activity ("OTAs" or "OTA days"). The restrictions set forth in Subsection 5(b) of this Article shall not apply to OTA days. The Club may conduct a maximum of three days of OTAs during each of the first two weeks of Phase Three. A maximum of four days of OTAs may be conducted during either the third week or the fourth week of Phase Three, with the Mandatory Veteran Minicamp (Article 22, Section 2) to be held during the other week. During weeks in which the Club conducts only three days of OTAs, the Club may also conduct a fourth day of non-OTA workouts, but such activities shall be subject to the rules governing Phase Two workouts, as set forth in Subsection 2(b)(ii) of this Ar­ticle. During Phase Three, all coaches shall be allowed on the field. No live contact is permitted. No one-on-one offense vs. defense drills are permitted (i.e., no offensive linemen vs. defensive linemen pass rush or pass protection drills, no wide receivers vs. defensive backs bump-and-run drills, and no one-on-one special teams drills involving both offense and defense are permitted). Special teams drills (e.g., kicking team vs. return team) are permitted, provided no live contact occurs. Team offense vs. team defense drills, including all drills listed in Appendix G to this Agreement, are permitted, provided no live contact occurs. Clubs may require players to wear helmets; no shells are permit­ted during Phase Three of the Club's offseason workout program or any minicamp. 132

(c) Each year offseason workout programs cannot begin prior to the first Monday in April for Clubs that have hired a new head coach after the end of the prior regular season, and cannot begin prior to the third Monday in April for all other Clubs. Each year on a date to be agreed upon by the parties, but no later than twenty-one days before the scheduled commencement of a Club's program, each Club shall provide the NFL and the NFLPA with the Club's schedule for its offseason workout program that year, and shall advise the NFL and the NFLP A in writing in advance of any changes to that schedule; if the NFL provides such information to the NFLPA, the Club's obliga­tion under this sentence shall be deemed satisfied.

Story and video from the facility as the #Redskins today have begun offseason workouts: http://t.co/xUsYHezIHa #HTTR 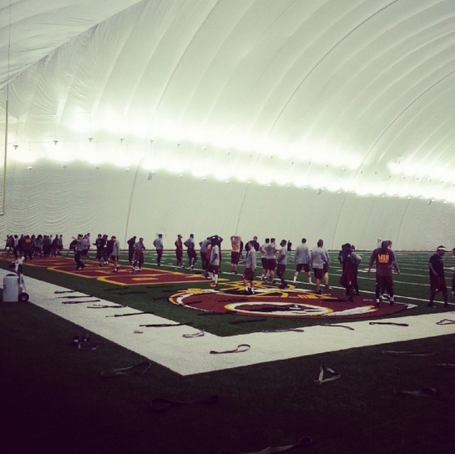