Hazard's Huddle: Is Bacarri Rambo a Lost Cause? (Part 3)

An All-22 film breakdown of Bacarri Rambo (Part 3)

Share All sharing options for: Hazard's Huddle: Is Bacarri Rambo a Lost Cause? (Part 3)

Hopefully, you've been following along in this series. If not, here's Part 1 and Part 2 to get you up to speed. Part 1 has the money quotes on why this series started. Continuing on, the last two parts focused on his game against the Broncos, and that was in the middle of the season. Here, I take a look at games later in the year (New York Giants and Kansas City Chiefs). 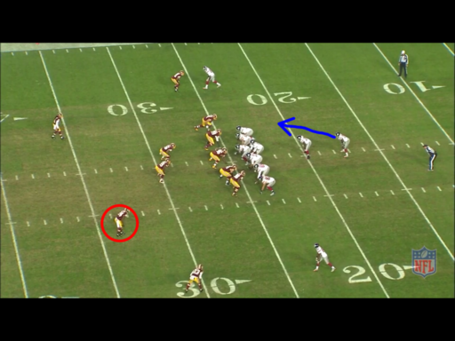 #1. Once again, Rambo didn't start this game. Brandon Meriweather and Reed Doughty started with Rambo replacing Dought on obvious passing downs. By the time the 2nd half rolled around, Rambo was playing all downs (Doughty had a concussion). Rambo is playing about 8 yards off the line of scrimmage here. The run play is going in the opposite direction. 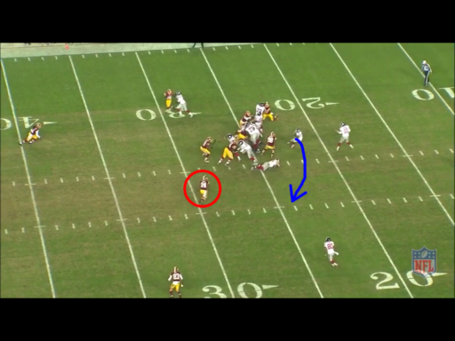 Brian Orakpo knives into the backfield (meaning Rambo has contain) and the RB is forced to change direction. 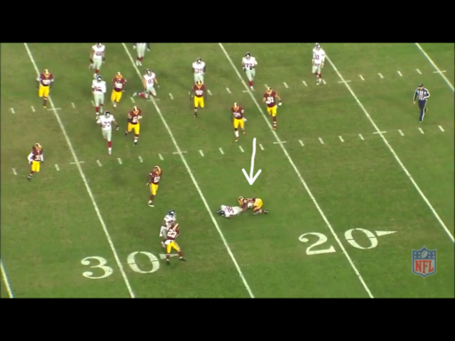 The RB tries to get outside but Rambo takes him down to the ground for no gain. 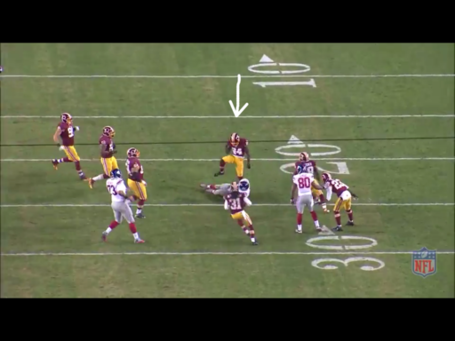 After the tackle, he has a mini celebration. This isn't your Laron Landry obnoxious celebrations after 25 yard gains, it looks like the guy KNOWS what he needs to work on and gains confidence every time he gets it right. 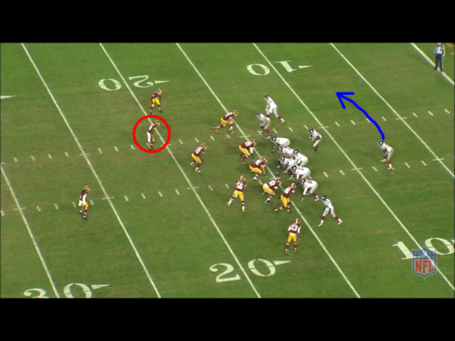 #2. This is legitimately my FAVORITE play of all the Bacarri Rambo tape I've reviewed from this past season. Rambo is lined up down in the box and the Giants are running a sweep to his side. 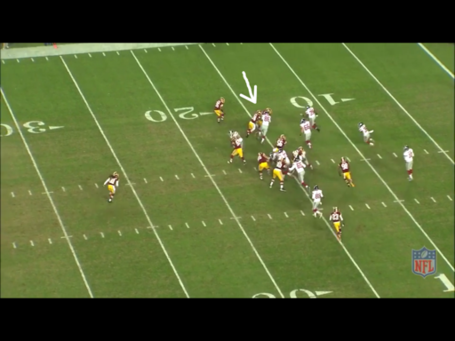 Rambo identifies run, comes up and legitimately pushes both Ryan Kerrigan and Giants TE Bear Pascoe into the backfield while reading the play. 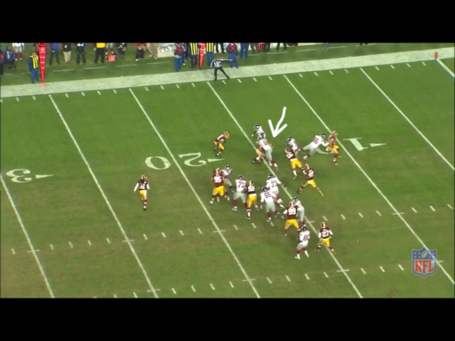 Rambo is then able to dip his shoulder and get underneath the block of David Diehl. 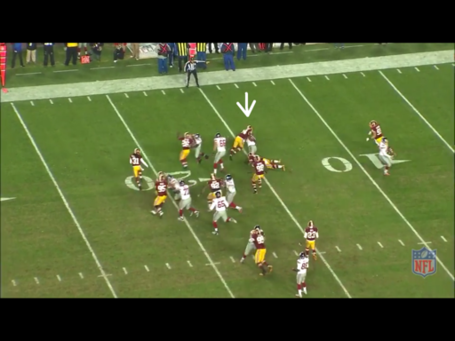 Rambo fights through all of that to wrap up the ball carrier and take him down for a loss on the play. 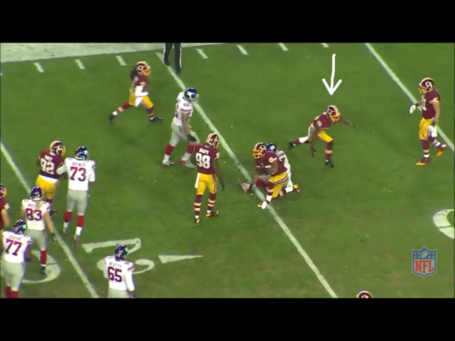 What? Another celebration? Good, each time he is building confidence and feeling like he belongs on the field. Let's review: 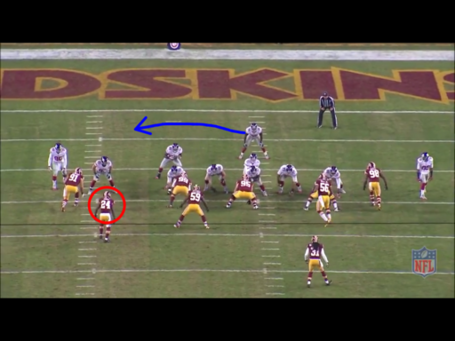 Rambo is in the box on a sweep. 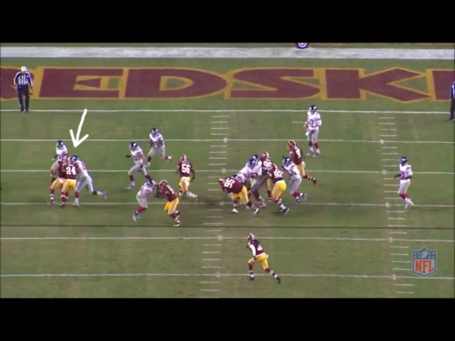 He pushes Kerrigan and Pascoe into the backfield. 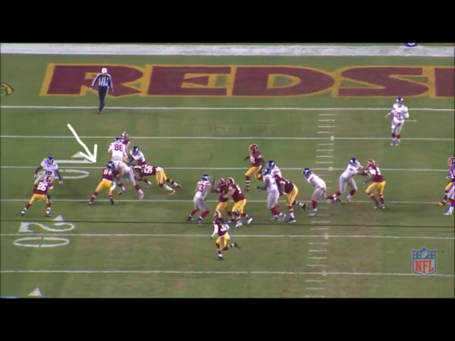 He gets under the block of Diehl. 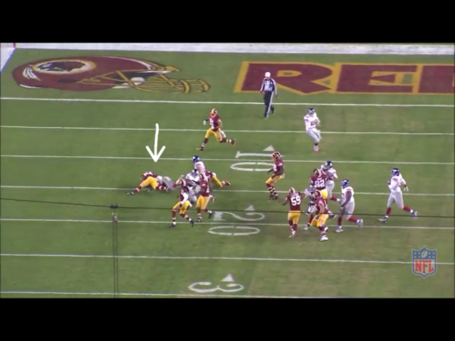 He makes the tackle for a loss. So, a player who is constantly scrutinized for his unwillingness to be physical and/or tackle mixed it up in the trenches and came out on top. 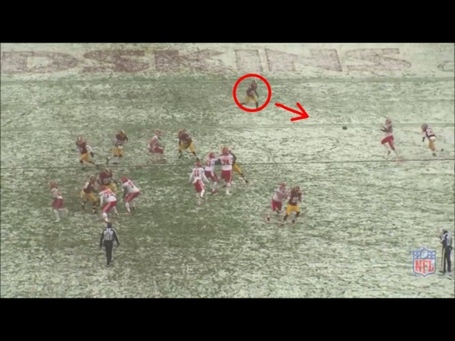 #3. The following week, something silly like this happens. Alex Smith throws a slant pass to Dwayne Bowe and Rambo has him lined up. 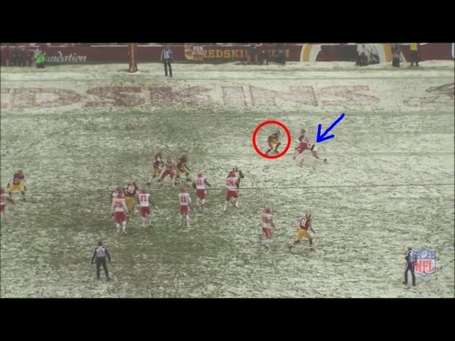 I was really mad at this play live because Rambo is right there yet it turns to a touchdown. It took me seeing it from this angle to notice that just as Rambo lowers his shoulder to deliver the hit, DeAngelo Hall hits Bowe's hip (the control center of the body) and moves it out of the way of Rambo's strike. I'm still not relieving him of all fault, Rambo should have had his arms out and wrapped around the ball carrier but it does shed light on how an inch can change a play. 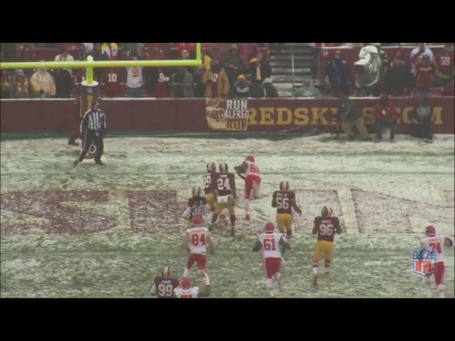 Instead of a tackle, the Redskins end up watching Bowe trot into the end zone.

Is he perfect? No, absolutely not but saying he is a lost cause is missing the bigger picture. We've been preaching "draft and develop" yet are already willing to give up on a 6th round pick who was put in a spot he wasn't ready to handle. A 6th round pick who was hauled out of the line up and made a scapegoat? Who was then deactivated and only played when they literally had no one else left on the bench to put in before him. Bacarri Rambo is not the only case that Mike Shanahan mishandled. The biggest thing for rookies is getting used to the speed of the NFL. How do you get used to that speed when you are put on the field so sporadically? I was told Rambo didn't "flash" like David Amerson or Richard Crawford in his rookie year. Here's three breakdowns of him "flashing." Took me a minute to realize that what fans meant by "flash" was get interceptions. Rambo improved from Training Camp to Week 1, Week 1 to end of season. That's the definition of promise. The book on Rambo was written after Chris Johnson and LeSean McCoy introduced him to the NFL. "Plays well in coverage but can't tackle." Towards the end of the year (the Giants game specifically), you could see him sacrificing coverage to help come up in the run game. A bunch of times Rambo would be flat-footed or use poor foot work because he stayed still too long making SURE the play wasn't a run. He knew what the knock on him was and continued to try and improve it at the sacrifice of other areas. So while saying he is not a "hitter" is true, saying he can't tackle, won't tackle, or won't get physical just simply isn't true. We drafted him, now we need to continue to develop him and there is plenty to work with.