Ken has demanded OL help early in every mock draft and offseason for the last 20 years, now he gets his wish.

Earlier this week we started up the Hogs Haven Draft GM Series by looking at 5 prospects at the top of the 2nd round that could be available when the Redskins pick at #34 overall. Our very own managing editor Ken Meringolo was asked to make the pick for the SB Nation 2 Round Bloggers Mock Draft. In an act of synergy that any nameless corporation would love, the 5 available choices were coordinated with the SBN Mock so the good people of Hogs Haven were not picking someone who would not be available to Ken.

Ken has been a beating the drum for OL help early and often for as long as I've been reading his writing. And unless he was responsible for that beautiful poem in the stall at that rest stop in New Jersey, I think that has been exclusively here at Hogs Haven. Luckily, the people have agreed with him this time, and he didn't have to use his editorial veto powers. I personally thought that Nix would have had more than 16% of the votes considering he is a projected 1st rounder and MTD has him as their #12 overall prospect.

I can't argue with the pick or the reasoning behind it though. Protecting the franchise QB and improving the overall line play should have been the priority as soon as the Redskins decided to trade up for RGIII. As long as Kouandjio's knee checks out, or at least checks out until the Super Bowl parade, it will be a solid pick. And if the reports on his knee are exaggerated, we have just drafted a 20 year old RT to bookend with Trent Williams for at least the next 4 years. So how did Ken do? Did he overlook obvious health concerns to make his RT in the 2nd dream come true, or did he set up the Redskins and RGIII for future success? 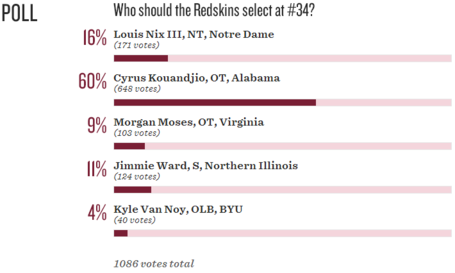 "When I saw Cyrus Kouandjio fall to us at the top of the second round, I sprinted to the digital podium and ushered in the next great era of Redskins offensive line play. Bookend tackles like Kouandjio and Trent Williams allow the Washington offense to run power plays to either side. No offense to Tyler Polumbus, but Cyrus is likely a considerable upgrade at the right tackle position, and has a lot more upside. He has played left tackle at a high level for one of the better college teams in the land, meaning we have a solid backup if anything terrible were to happen to Trent. In short yardage situations, defenses would have to play us a little bit more honestly, as we could look to plow through either the left or right side.

Both Trent and Cyrus can get out ahead of running plays, and can violently pave the way for Alfred Morris. I also see us being able to run bubble screens to any of our speedy receivers on either side, with both Trent and Cyrus looking to tee off on defensive backs and linebackers. As I have said repeatedly, I believe an investment in an upper-tier offensive lineman is an investment in Griffin, Morris, our receiving corps, and Jay Gruden. Imagine how much faster our offense can develop behind these two tackles. As a Bishop McNamara alum, it hurts a little to bring in the DeMatha product, but I am a team-first guy. Yes, there are other players available that could help us, but none that would have as much of an impact as a first-day starting right tackle…in my humble opinion."

Anyone who selects Kouandjio is taking a calculated risk. Reports out of the NFL Combine were that he has an arthritic knee, leaving questions about his long-term health. Although Kouandjio and Dr. James Andrews disregarded those claims, they are out there. But what if whomever drafts Kouandjio can get five good years of play before the knee becomes an issue? By then, the pick would be considered a good one. Given Washington's need at the position, and the drop off after Kouandjio, this is a sound choice. It may even have more plausibility than other picks in this mock draft due to Andrews' opinion given he is Washington's team doctor.