Hazard's Huddle: How Will Jay Gruden Use DeSean Jackson?

Share All sharing options for: Hazard's Huddle: How Will Jay Gruden Use DeSean Jackson?

Earlier in the week, I took a look at exactly what the Washington Redskins were getting in DeSean Jackson. If you missed it, you can find it HERE. To summarize, we signed a receiver who is as fast as anyone and lightning quick. He uses his route running and footwork to create separation instead of his hands and frame. His catch radius is limited because he is a body catcher but at certain times is able to pluck the ball out of the air. He struggles in physical situations but if he can avoid a CB's attempt at that kind of situation, he has the skills to make them pay.

How will Jay Gruden use such a weapon? Where will DeSean Jackson line up? Short answer? Everywhere. DeSean Jackson brings a little AJ Green (winning 1-on-1 match-ups/deep threat) AND a little Andrew Hawkins (shifty/gets ball in space and can make things happen) to the table. Jay Gruden loves using personnel and formations to gain an advantage so let's take a look at what he might do. 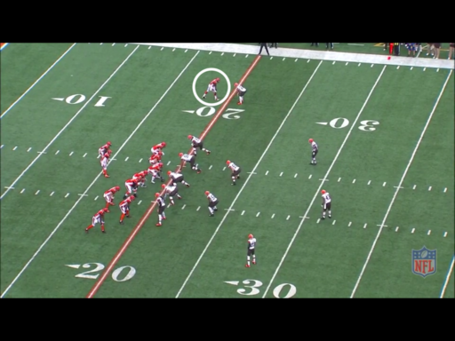 Here is A.J. Green at the top of the screen. Gruden puts three pass catchers on one side of the field and isolates AJ Green on the other side. AJ Green has the ability to beat man coverage and this puts a single-high safety in a rough spot. Has to shade either AJ Green or the three WR side. 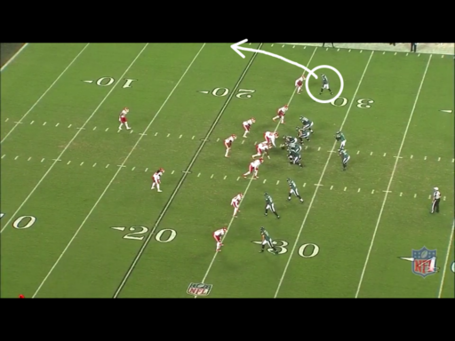 Here is DeSean Jackson as the isolated receiver on the single receiver side. You only do this (or it can only succeed) if you believe this receiver has the ability to win in one-on-one situations. 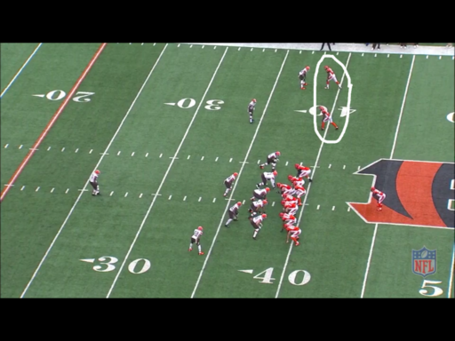 Twins refers to two receivers on the same side of the formation. Gruden uses Twins in a variety of different ways (stacked/bunched/tight/gain advantage in run game/combo routes, etc). 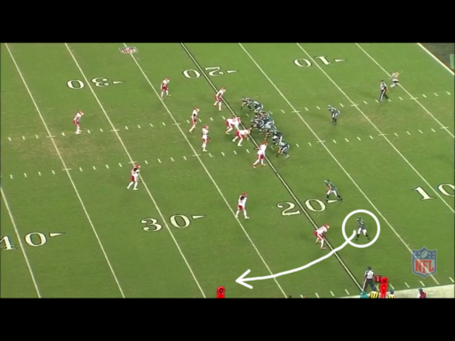 The Philadelphia Eagles and Chip Kelly did the same thing with "Twins." DeSean Jackson plays on the outside and can do a number of things from here. 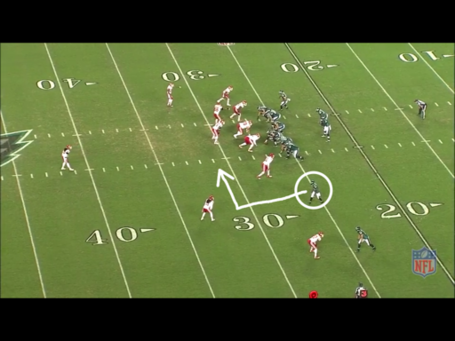 DeSean Jackson wasn't limited to the outside in "Twins" though. He also played the inside receiver (slot) where you have a number of other things you can do with him. 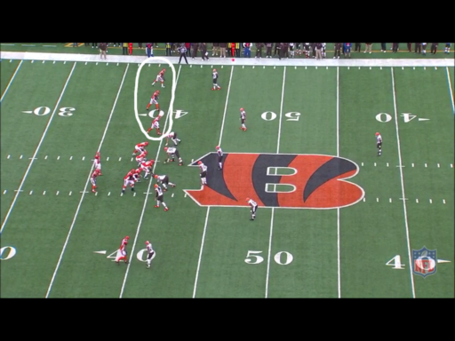 Trips, of course, means using three receivers on one side of the formation. In Jay Gruden's case, receivers don't always mean wide receivers. It means tight ends as well because Jay Gruden likes moving his pieces around. 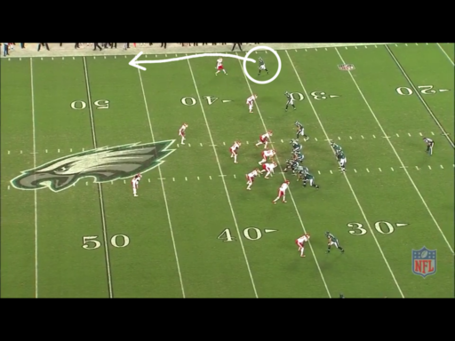 Here is Chip Kelly using "Trips" and DeSean Jackson is playing on the outside. He can be the primary receiver out here or he can be used as a decoy to run off coverage for the other receivers to get targets. 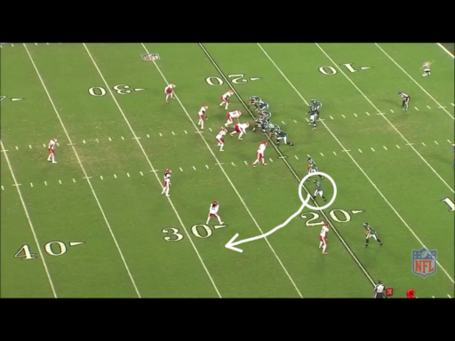 The Eagles run "Trips" again but this time DeSean Jackson is the middle receiver. Once again, a host of new responsibilities and routes can be run from here as opposed to the outside. 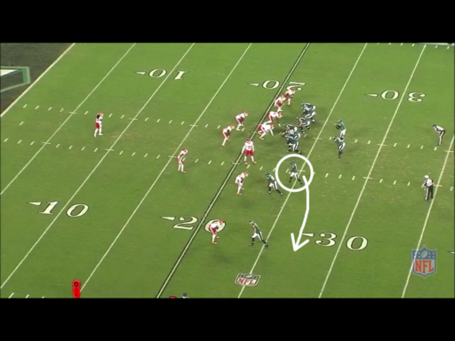 You probably saw it coming, but here is DeSean Jackson in "Trips" as the inside receiver. Different position = different responsibilities. This also gives defenses a hard time figuring out how to match up with Jackson in a short amount of time. 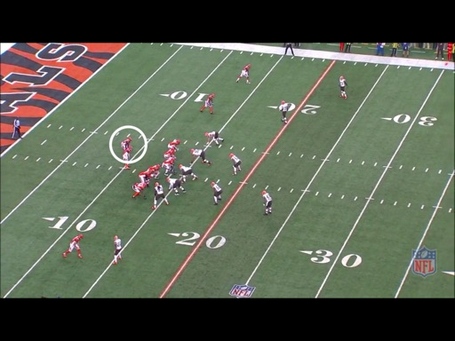 Last year, Jay Gruden and the Bengals drafted a dynamic running back named Giovanni Bernard. Gruden used him as a 3rd down back (later getting more responsibilities) and had great success with him. With Roy Helu not having that kind of skill set (can catch but isn't as shifty in the open field to make people miss) and Chris Thompson having to prove his health, there is no doubt they'll add some kind of competition for those two. Until then, there are rumors that Gruden has envisioned using DeSean Jackson out of the backfield some. It probably wouldn't be a lot, but it'd be another place to put him and gain match-up advantages. 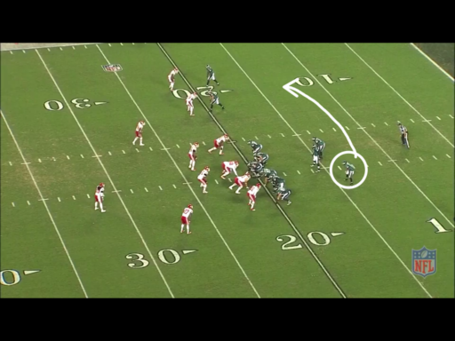 DeSean Jackson is no stranger to that notion. Chip Kelly would use him in some two back sets and would bubble him out or run him on a wheel route up the sideline. 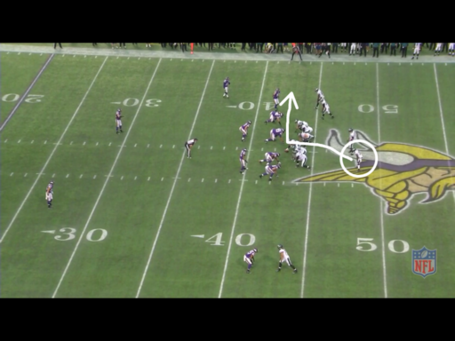 Chip Kelly even used DeSean Jackson as a single back. On this play, Jackson gets lined up with a safety, easily loses him in traffic and gets an 8 yard gain on a simple release route.

One of the major reasons free agents fail in new destinations is because teams sign him because of what the player did, and then ask them to do something else. With all that is above, it's hard to imagine asking him to do something he hasn't done because he did it all. Each spot on the field that DeSean Jackson played has it's own unique responsibilities and it's not like I had to scan the entire season to find each. Except the ONE backfield screenshot, these were all taken from the same game. Not only does he have the versatility to play every single spot on the field, but he knows the assignments that come with it. It's only April, but it is definitely exciting to think about how Jay Gruden will attack these defenses with the chess pieces he has in place.