A quick look at how the Redskins defense will be altering under Jim Haslett.

Share All sharing options for: Hazard's Huddle: 1-Gap vs. 2-Gap

Yes, Jim Haslett is still our defensive coordinator. Yes, we're still running a 3-4. No, not all is lost. I've been asked numerous times how this year could possibly be any different than the previous years under Haslett's reign. While it's been speculated that Mike Shanahan was dipping his hand in the defensive play calls and scheme, it's not yet known to what extent that Shanahan was meddling. Listening to guys like Jim Haslett, Brian Orakpo and a handful of other defenders speak about the defense now though, it sure sounds like there will be a change in philosophy. . . . .and there has to be. . . .

Yes, we're paying Brian Orakpo elite money without elite numbers. Yes, our biggest splash in free agency was for a DL that only had one breakout season in a 4-3. No, that doesn't mean we are going to continue using players like them incorrectly. Since the off-season has started, defenders and the coach have been talking about a much more aggressive style of defense. For the last few years, we've played mostly a 3-4 2-Gap system. In Baker, Cofield, and Hatcher, we have collected a group of players that are very good 1-Gap defenders and it sounds like that will be the direction we are heading. 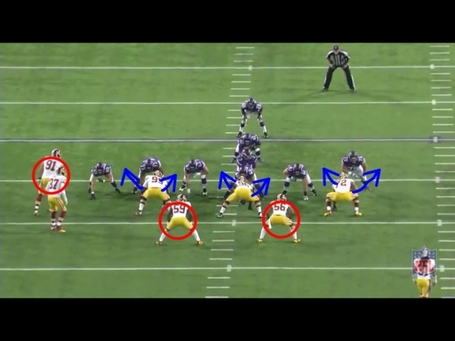 In 2-Gap, Barry Cofield (0 Tech NT), Jarvis Jenkins (5 Tech DE) and Stephen Bowen (5 Tech DE) take on a block ahead of them and are responsible for the gap on each side of them. The point for them is to hold their blocks, read/react, and try to make the play if it comes to either of their gaps by either pushing their blocker into that hole or stretching their arm out enough to stop ball carrier's momentum. At the very least, they are holding these blocks so the LBs at the 2nd level can stay clean (not get blocked) and make the play. In this system, the DL are basically space eaters. 2-Gap can minimize the effect of the run game but handicaps you in the pass game. If this is a play-action pass, 3 DL are already tied up in blocks before they can attempt to make a move. 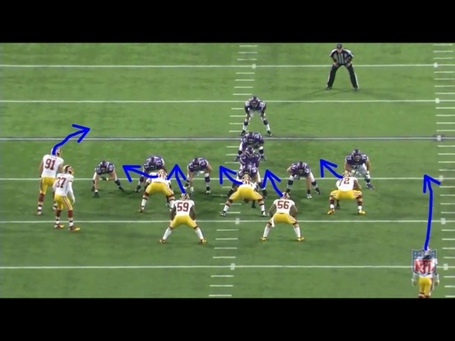 This is the system we appear to be adopting. In this system, every player in the box is responsible for 1-Gap and every gap should be assigned. Instead of holding blocks and reading/reacting like 2-Gap, the name of this game is penetration. The Defensive Line's job is to get in their gap, get up the field, and disrupt the play. If this is play-action, you have guys who are already penetrating and getting up the field to put pressure on the QB. The downside is that this penetration can open up huge cutback lanes in the run game. 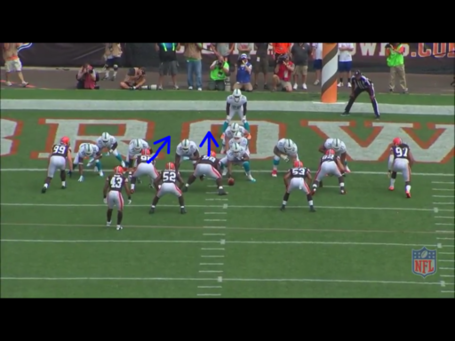 Something we will also see more of in the 1-Gap system is players lining up in their assigned gap. This is a 3-4 from the Browns but Phillip Taylor (their 0 Tech NT) is actually lined up as a 1 Tech (between the Center and the Guard). The Redskins will be able to put different players in different gaps depending on strength, play-call, etc. 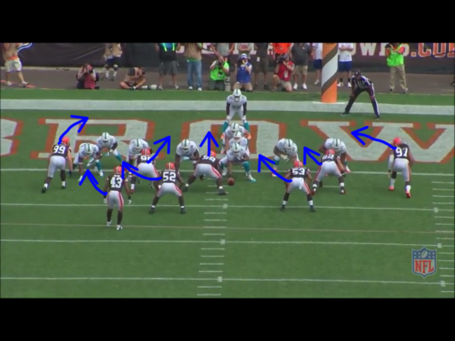 As you can see, you can change alignments and everyone still has a gap to penetrate and everyone has an assignment.

The best part about collecting guys like Chris Baker, Barry Cofield, and Jason Hatcher is their versatility. They can play all over the D-line. They can take on different gaps and they are all more penetrators than space eaters. This is what Jason Hatcher was saying about the Redskins letting him be himself. He is still going to be allowed to shoot gaps, penetrate and create pressure on the QB. Hearing Brian Orakpo say "If I lose contain, who cares?" isn't exactly reassuring (I bet LeSean McCoy loves to hear it), but it certainly sounds like they're going to let him rush the QB more often. Like I said, we don't know exactly what influence Shanahan had on the defense but it would make sense that he implored the 2-Gap system. Why? The 1-Gap's main weakness is giving up cutback lanes and Mike Shanahan won two Super Bowls taking advantage of them. I don't know what the 2014 season holds for the Redskins defense, but at the very least, they are changing from watching plays develop to forcing plays to develop.