Fred Davis Had a Bad Day.

Fred Davis has reportedly topped off an indefinite suspension from the NFL with a DUI this afternoon.

Share All sharing options for: Fred Davis Had a Bad Day.

It has been less than 24 hours since Fred Davis was suspended indefinitely from the NFL for violating the Substance Abuse Policy, and he is already back in the news for all the wrong reasons.  Police confirm that Davis was pulled over at 3:45 in the afternoon and charged with a DUI.  Davis released a statement after his suspension was announced denying his continued drug abuse, instead blaming it on a banned substance he had taken.  This arrest will not help his case that he has worked to eliminate poor decisions from his life. 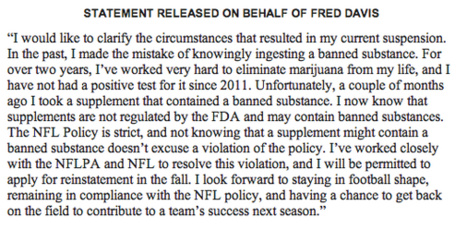 Davis has been a polarizing figure since he was drafted in the 2nd round in 2008, and his career has had decidedly more downs than ups.  He has been hindered by drug suspensions, consistency, and injury.  In his last season with the Redskins, Davis had trouble getting playing time, admitted to rumors of dozing off in meetings, dealt with a court case, and competed with Josh LeRibeus and Josh Morgan for the biggest spot in Mike Shanahan's doghouse.  This should definitely eliminate any chances of Fred "Sleepy" Davis returning to the Redskins in the future, and could further endanger his chances of ever playing in the NFL again.

It's a sad end for a player who came from a very disappointing draft class.  Trent Williams was suspended at the same time as Davis in 2011 for failed drug tests, and has learned from his mistakes.  Davis has not been able to do the same thing in his life, and now he is facing those consequences.  Hopefully he can get the help he needs and this experience forces changes in his personal life.

Can confirm Fred Davis was pulled over today and charged with DUI today in Fairfax Country.

Davis was arrested at 3:45 pm at corner of Gallows Rd and Leesburg Pike. His agent declined comment.

John Keim wrote an article yesterday talking about the warning signs that were there during the draft process:

Shortly before the 200 NFL draft, I remember asking an analyst what players he would stay away from. Among the three names he provided: then-USC tight end Fred Davis. He did not like Davis’ off-field behavior. Soon after arriving in Washington Davis missed a spring workout because, well, because of some late-night activity that caused him to oversleep. And the tone for his career was established.

[UPDATE #1: 2/21 9:45AM] Photos(and possibly video) of the arrest have surfaced and the Huxley Nightclub in D.C. is reportedly where Davis spent his Wednesday night.

Fred Davis was charged with DUI a day after his suspension was announced. Here's a photo of his arrest: http://t.co/DQsSolqwPA