A quick look at draft players that would be easy to fall in love with, if not for themselves.

Share All sharing options for: I Love Him. . .I Love Him Not. . .(Draft Edition)

We already took a look at some of the free agents available that have the power to tug at our heart (HERE). Now let's take a look at some draft prospects in the same light. We are highlighting players that find a way to both pull us in and push us away. Drafting players is a lot like eating a box of chocolates. They all look desirable in their own way but eventually you grab that nasty one filled with toothpaste and regret it. 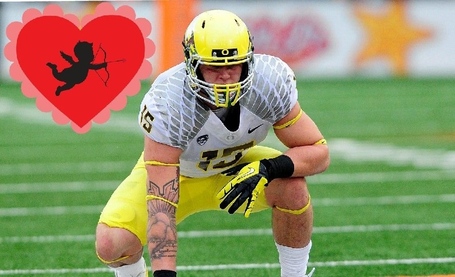 Heart Says: Colt Lyerla will be this years Da'Rick Rogers/Vontaze Burfict. Every fan base will want to grab him late. This guy was the #2 ranked TE going into this season. He is a dangerous pass catcher that can move all around the field and present mismatches for defenses. He is even versatile enough to take carries out of the backfield. He is fast for his position and he is explosive off the ball. He has also been used as a red zone weapon.

Head Says: I don't like a quitter. Lyerla quit the Oregon football team. He missed a game, was suspended a game, and then quit. Five days after he quit, his license was suspended for being pulled over three times in ten weeks. He was later arrested for unlawful possession of cocaine. He plead guilty. Now, he is lucky if he even gets drafted. 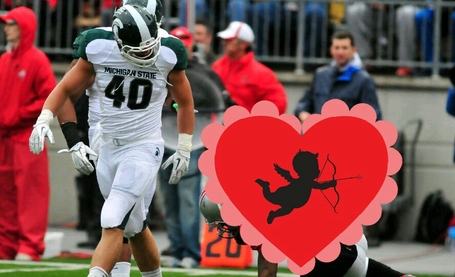 Heart Says: With London Fletcher retired, the Redskins need a new leader on defense. Max Bullough was the leader of one of the top defenses in the entire nation. Bullough is a thick-bodied LB who is excellent against the run game and in the tackle box. He has been a presence on the field during his time with Michigan State because of his physicality.

Head Says: He hasn't shown the ability to play in pass coverage so he will be limited as a 2-down linebacker. After his team made it to the Rose Bowl, Bullough found a way to get suspended for the biggest game of his life. Listed at 245 lbs, Max showed up to the East/West Shrine game weighing in at 265 lbs, an astounding 20 lbs heavier. He didn't have a good showing there and compounded the issues with ignoring/blowing off media. 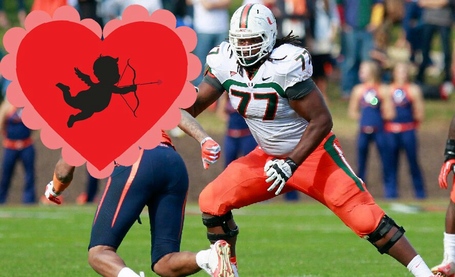 Heart Says: Henderson was the #1 recruit in the nation coming out of high school. He has a massive frame yet is athletic for his size. He has long arms and is very strong in both the upper and lower body. Redskins have been looking for someone to lock up the RT position for quite some time.

Head Says: He has never been able to put it all together, why would it change in the NFL? Henderson's problem is I dont think he loves football. He always seems to be detached from the game. The announcers at the Senior Bowl game even mentioned it looks like he just gets bored on the field and becomes lethargic. Henderson admitted he had been suspended by Miami three times for marijuana use. After his freshmen season, he needed back surgery. Henderson was also involved in a car accident with a family of six, putting two kids in the hospital, when he ran a red light. He missed Miami's first 12 practices that year with a concussion he received due to the crash. 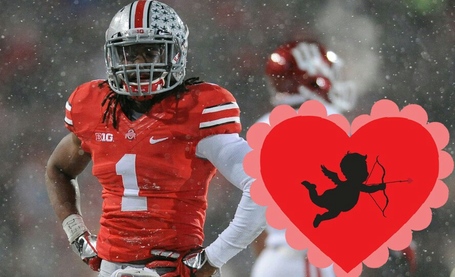 Heart Says: Roby came into this season as the #1 rated CB, he was attacked and burned more than the previous year which has hurt his draft stock. Sound familiar? Same story as David Amerson. Bottom line, Roby is an elite athlete at the position. His straight-line speed, acceleration, quickness and hip flexion are off the charts. He has great ball skills and is scrappy. He is not afraid to hit people or come up and make a tackle in the run game.

Head Says: Roby was suspended for the first game of the season after he was charged with misdemeanor disorderly conduct for striking the bouncer of a night club. Roby got cocky on-the-field after an excellent season last year and he let it hurt his play. Takes too many chances because of his athleticism that won't cut it on the next level. 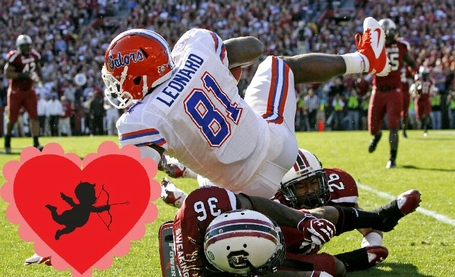 Heart Says: a former 4-star TE, Leonard started his career at the University of Florida. Even though he couldn't beat out Jordan Reed for a starting spot, it was still evident that he had good potential. Leonard is explosive off the line of scrimmage and can stretch the field. He has soft hands and is good after the catch. He could provide insurance for Jordan Reed (health) and even play in two TE sets as Gruden likes to use multiple TE sets.

Head Says: This guy was booted from the University of Florida after he was charged with misdemeanor battery after an altercation with his live-in girlfriend. Leonard allegedly shoved her in the chest with both hands and knocked her to the ground. She struck her head off a dog cage. Leonard then grabbed her by her hair and dragged her to the front door. He then grabbed her by her feet and threw her out the door and locked it. In addition to off-the-field issues, Leonard isn't a very good blocker and constantly loses battles. He has had a hard time focusing on football at such a smaller school. 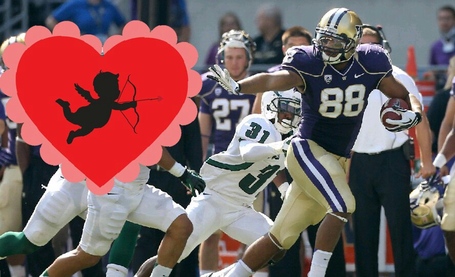 Heart Says: When is the last time we had a jump ball guy? A red zone threat? Seferian-Jenkins would provide that. ASJ is a former basketball player who plays the position like other basketball guys (Jimmy Graham, Tony Gonzalez, Antonio Gates, etc.). He is a good in-line TE who holds up in the run game and he's a great pass catcher. If you can pair him with a HEALTHY Jordan Reed, you have your own Gronkowski/Hernandez combo. With all the TE sets Gruden ran last year, ASJ's versatility to play in-line or out wide for jump balls could be a perfect fit.

Head Says: He was suspended for the home opener this year after guilty to a DUI charge. Police found his car in a drainage ditch. He had hit his head on the windshield and they found him with a bloody face. Jenkins said he remembered he was partying with friends but doesn't remember any of the rest. He was only 20 at the time. On the field, I need to see him playing 100% on every down. He gets lazy at times.

So, are these cases of just "boys being boys?" Or are they establishing the way their future is going to play out?